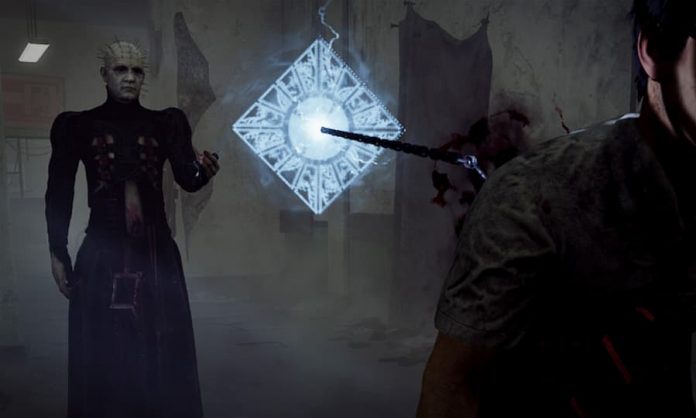 Hellraiser’s Pinhead, the chain-hurling minion of Hell has joined Dead by Daylight as one of the game’s growing roster of killers.

Who’ll be next to sign up for a little asymmetric murder? We’re holding out for Jason Voorhees, complete with a Camp Crystal Lake map, but Pinhead will definitely do for now. His roles in the many, many Hellraiser movies have ranged from satanic judge through to stalk-and-slash killer. He’s certainly an imposing foe, though hearing him say “How’s that for a wake-up call?” in Hellraiser: Hellworld didn’t do him any favours.

Dubbed “The Cenobite” in-game, Pinhead also has an alternative Chatterer Cenobite skin, allowing you to play as the series’ second most iconic monster. As you’ll know if you’ve seen the movies, Pinhead’s method of attack is largely chain-based, which is also the case here. If he catches a survivor with a chain they’ll be unable to sprint, increasing the likelihood they’ll be his next victim.

What really has us intrigued, however, is that Hellraiser’s puzzle box figures into the mix; if left alone it’ll effectively “hunt” survivors, tagging them if it catches them and letting Pinhead teleport right to them. The downside of all these hellish shenanigans is that Pinhead isn’t voiced by Doug Bradley; granted, Bradley hasn’t been in the last two movies, but we’d love to have seen him brought back for this outing.

Dubbed “The Hellraiser Collection”, Pinhead is available right now for $4.99, across all platforms. Give the trailer a watch below.