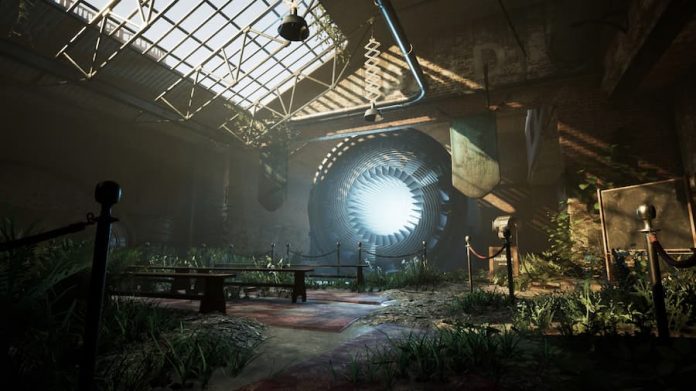 Industria‘s trailer may be less than a minute long, but that’s all we needed to have our attention piqued.

A first-person shooter set in the fictional city of Hakavik, Industria takes place the day before the fall of the Berlin Wall. Hakavik mirrors East Berlin’s brualist architecture – but it’s fused with futuristic technology, including strange apparatus and robots.

This is a FPS, so of course you’re equipped with a gun, but there’s more to Industria than simply running and shooting. There’s a story to follow; a twisting narrative that will uncover more about the strange world you find yourself in. A mystery sits at the heart of Industria‘s story, which will unravel as you explore the world and gather intel.

Industria is coming from developer Bleakmill, a small team that has been working on the game for six years. It started out as a two-man team, but has expanded to six over the years. What is impressive, though, is each member of Bleakmill has only worked on Industria in their spare time. That’s exciting – we love to see people’s passion projects come to fruition. Hey, after all, GameSpew started in exactly the same way.

Give the trailer a watch below. We dig the game’s atmosphere and style, and if you’re a fan of first-person shooters with more substance than simply putting bullets in things, this will be one to watch.