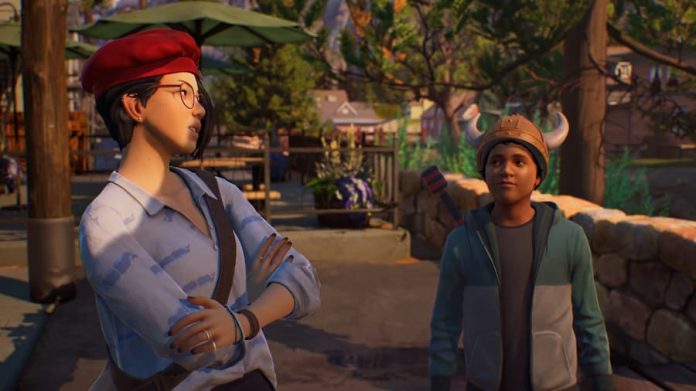 This article contains spoilers for some of Life is Strange: True Colors‘ gameplay.

Life is Strange: True Colors is a phenomenal game – we’ve already established that with the 10/10 I gave it earlier this week. But there’s one section in particular that really stands out.

In chapter three, members of the town of Haven Springs decide that one of its youngest residents, Ethan, needs cheering up. After all, he’s been through a tough time – they all have – but it has hit him perhaps hardest of anyone. And so, to cheer him up, a big, town-wide LARP has been devised. LARPing, for the ungeeky amongst you, stands for ‘Live Action Role-Playing’. It’s where people dress up in costume, run around forests and fight each other with fake swords.

Life is Strange: True Colors, though, makes LARPing seem more cooler than ever. You see, the whole town is involved; the local bar is turned into a medieval inn. Random people from the town join in, dress up in costumes and are primed to give you quests. You, as protagonist Alex, are accompanying Ethan – the star of the show – as his bard. And together, you must battle your way through terrible monsters in order to save the day. Cue Alex’s friend Ryan dressing up as a troll, serpent and wolf, ready to be defeated.

It’s not just the town of Haven Springs that changes, though. The gameplay of Life is Strange: True Colors changes alongside it. Alex and Ethan have health bars. They collect scrolls laying on the ground which enable them to use new spells and abilities. Ethan’s powerful sword – not real, of course – allows him to deal damage, sometimes imbued with fire, to those foes blocking his path. And Alex, with her magical Bard powers, can strum her guitar to either heal, stun or deal damage.

See Life is Strange: True Colors‘ LARPing section in action in the video below:

Essentially, for around 20 minutes, Life is Strange: True Colors turns into a full-on RPG, and it’s absolutely delightful. And, later on, when Alex becomes influenced by Ethan’s joy, even the world around them changes; the pair can see themselves actually in a medieval setting – ruined buildings, authentic outfits et al. It’s magical for them – and it’s magical for us, the audience.

This is a really clever section of the game because, not only does it break up the gameplay, surprising us in a delightful way, but it provides a mirror for some of the events really occurring in Haven Springs. But to delve deeper into that would ruin more of the story for you – and that’s not something I want to do. You’ll have to wait and see it for yourself. But even just as a break from reality, a little glimpse into a world of magic and adventure, Life is Strange: True Colors‘ LARPing section is something really special.