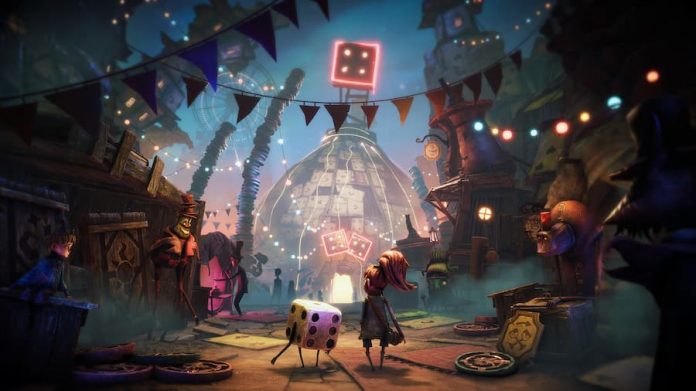 Captivating, magical and original: three words that sum up Lost in Random in a nutshell.

From Zoink! Games, Lost in Random is a fantastical adventure that follows young girl, Even, through the land of Random on a quest to save her sister, Odd. You see, the world of Random, divided into six very different worlds, is ruled by an evil queen, and every child’s fate is ruled by the role of the dice. Born in Onecroft, Odd rolled a six – a sought-after number that allegedly promises a life of luxury by the side of the queen. But left back at home as a lowly ‘Oner’, Even knows something is wrong. She knows her sister needs her help. And so off she sets on a journey through each of Random’s six realms.

Even isn’t alone, however: she soon finds a mystical, living die who she dubs ‘Dicey’. This isn’t your ordinary die; he wields powers that Random has not seen for many years. And with Dicey by her side, Even has all she needs to get her sister back. But it’s not going to be easy.

Journeying through Lost in Random‘s magical world is, in itself, an utter delight. Yes, it’s very easy to draw comparisons between this world and the works of Tim Burton – there’s a lot of similarities here to be drawn between The Nightmare Before Christmas and Corpse Bride in terms of visual style. But I’m reluctant to do that because Zoink!’s artists deserve all the credit for how wonderful and mystifying Random is. It truly is captivating, and while its world is not exactly open for exploration, each area is big enough to wander, and there are secrets to be discovered. It really is worth poking around as much as you can.

Equally as delightful – and sometimes terrifying – are the weird and wonderful residents of Random. You can talk to practically everyone. And while some townsfolk may only have a few lines to utter at you, others have side quests for you to undertake, asking you to seek out a person or find an item. The quests aren’t ever particularly difficult, but they provide more reason to stick around in Lost in Random‘s gorgeous world. 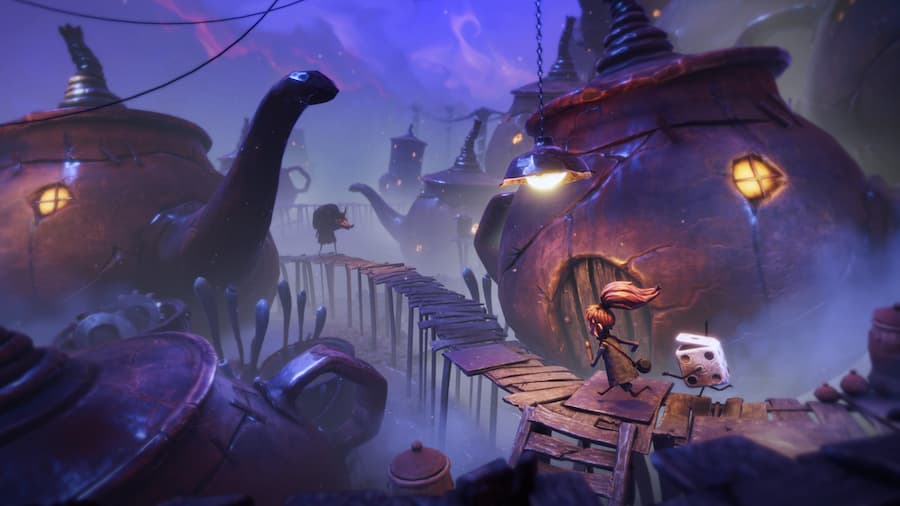 Also worth mentioning is the fact that every character, regardless of how small their role in the game is, is fully voiced. There’s some seriously excellent vocal talent on display here. If it wasn’t for the non-existent lip syncing – perhaps the only fault I can find with Lost in Random‘s visuals – you could easily believe you were in an interactive movie.

As for gameplay itself, your time will be spent equally between exploring and engaging in combat. Lost in Random‘s combat is unique and generally very enjoyable. But it does have some weaknesses that can lead to frustration, particularly if you go into battle unprepared. You see, combat in Lost in Random is something of a hybrid between third-person action and a collectible card game. It sounds bizarre but it works – for the most part.

Even herself cannot attack. She does wield a slingshot, but its ammo can’t hurt opponents. Instead, she can aim at crystals that form on enemies, and by shooting them, Dicey can pick up the fragments which in turn fill your hand with cards. When you’ve got enough cards, pressing a button will take you to the ‘Dicemension’. Rolling Dicey will determine how much energy you have to use, with each card having an energy cost. 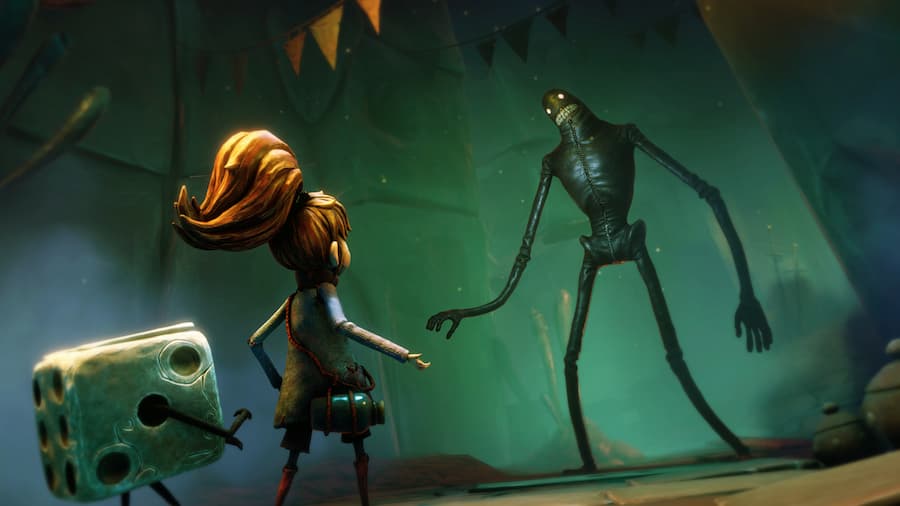 Some cards can offer Even a form of defence or heal her, while others will grant her a weapon to use for a short time. Others can also place traps in the environment; a huge hand that can damage enemies it pushes through, for example, or an oversized die that rolls around the environment, damaging anything in its path. Ideally, though, you want a weapon card in your hand.

With a weapon, Even can then directly damage enemies, either swinging at them with a magical blade, or turning her feeble slingshot into a powerful bow and arrow. She only gets a finite number of attacks, however, before her weapon dissipates. To get it back, you’ll have to collect crystals once more, building up enough to be able to enter the ‘Dicemension’ again.

Without a doubt, Lost in Random‘s combat is innovative, and that alone makes it enjoyable. Landing a roll and having a powerful card in your hand is always cause for celebration, and returning to the real world to land some hits on your enemies is fluid, fast-paced and thrilling. But it’s when you don’t get the cards you want when Lost in Random‘s combat falls down. Random is the very name of the game; sometimes, you simply won’t get an attack card. That means collecting more crystals, and, when you’ve got multiple enemies surrounding you, not being able to deal damage can be troublesome, particularly if the area you’re fighting in is rather small – and they often are. You’ll need to stay quick on your feet and nimble with your slingshot in order to shoot crystals and collect their shards.

It also means that sometimes, a single battle can be very drawn-out, particularly boss battles – it’s not unusual to be in the same fight for upwards of 20 minutes. If you die, you’ll be taken right back to the beginning of the battle. It’s a bit of a kicker, especially if you were very close to victory. 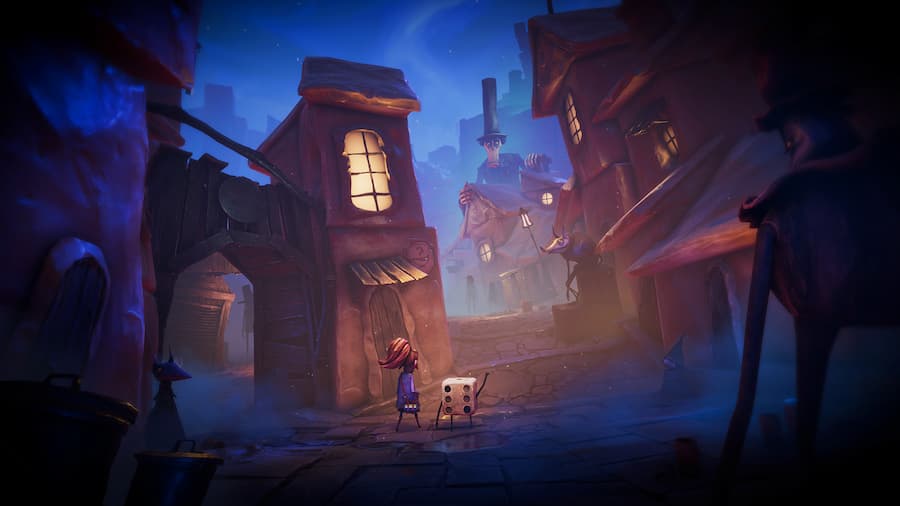 But it’s a small issue that really doesn’t do much to sour the experience. As you progress through the game, you’ll acquire more cards – and tailoring the cards in your hand to have the perfect balance of attack and defence means it’s less likely you’ll be left without something useful in your hand. Each new world brings with it a new weapon card that Even can use, too, including a huge hammer that can deal large amounts of damage, and a polearm for extra fast attacks. Couple these with cards that you can acquire later on, such as poison damage, and you have a venerable arsenal at your disposal.

Thanks to its absolutely sublime art style, excellent voice acting and its dark, fairytale-like narrative, Lost in Random is a wonderful adventure that will have you gripped. It’s a shame there’s no lip syncing to really finish off the visuals, and combat can be a little frustrating at times, but in the grand scheme of things these are miniscule issues. There’s so much originality and charm here that it’s hard not to fall in love with the world of Random.

This review of Lost in Random is based on the PS5 version, with a code provided by the publisher. It’s available on PS4, PS5, Xbox One, Xbox Series X/S, Switch and PC.

Upcoming Adventure Lost in Random Looks Like Nightmare Before Christmas