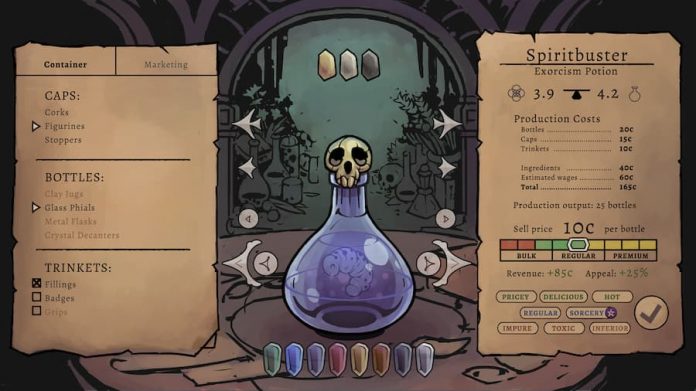 Adventurers would be nothing without their potions and Potion Tycoon gives you the chance to be their primary supplier.

As suspect as that sounds, it’s only sensible to make sure your avatar is laden with potions before you head off to fight a boss. There’d be a lot more dead chosen ones if it wasn’t for the thankless shopkeepers who toil to manufacture health potions, magical drafts and other bottled pick-me-ups. Sure, Cloud Strife and friends may have been too stupid to use a Phoenix Down when that character bit the dust, but that’s entirely their fault.

Potion Tycoon focuses on the fine art of crafting these pick-me-ups, sourcing ingredients, deciding just how your potions are packaged and so on. You also get to build and manage your potion manufacturing workshop and watch your customers file in to collect the fruits of their, er, your labour.

However, what intrigues us the most about Potion Tycoon is that there’s apparently no dungeoneering element. We’ve seen several similar games but most see you heading into a dungeon to gather resources when any good magic shop or potion shop owner would either delegate that or purchase the supplies wholesale.

Potion Tycoon doesn’t have a final release date yet but it will be hitting Steam Early Access some time next year, published by Daedelic Entertainment and developed by Snowhound Games. In the meantime, you can wishlist it on Steam here.