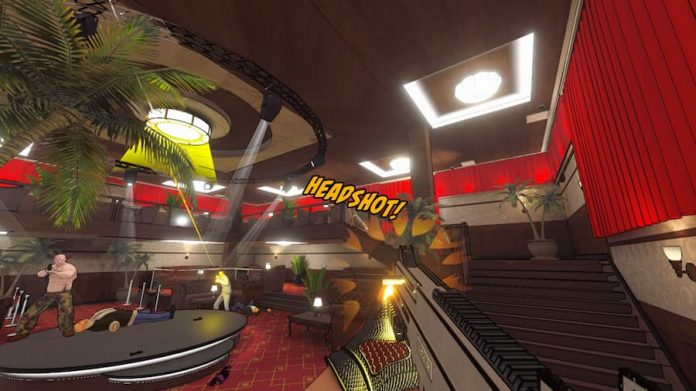 Sequels are supposed to be bigger and better than their predecessors. RICO London feels like a big step back.

It’s New Year’s Eve, London, 1999, and Detective Inspector Redfern has a hunch. She suspects an arms deal is about to take place at the base of a high-rise building, and it turns out she’s right. Not one to back down from a challenge, she decides to face the wrongdoers head-on – why wait for back-up when you’re capable of dealing the matter yourself? Still, she’s got a long night ahead of her.

In RICO London‘s Operation mode, you’ll take control of Redfern as she clears each floor of the high-rise one by one. Moving from room to room, you’ll kick down doors, triggering a bout of slow motion before moving in to blast the goons inhabiting them. Some might even decide to slide into rooms if they want to step the action up a notch. Along the way, you’ll need to frequently acquire new weapons as your stock of ammo depletes, and at the end of each floor you can exchange any merits you’ve earned for a range of perks and other performance-enhancing goodies.

It all sounds pretty good, right? Unfortunately, it’s far from it. After just ten minutes or so of play, you’ll likely feel like you’ve had your fill of RICO London. You kick a door, trigger slo-mo, shoot some goons. Kick another door, trigger slo-mo again, shoot more goons. Rinse and repeat until you’ve lost the will to live. It’s only when objectives start being handed to you on higher floors that things start to perk up a little. But even then, it’s not transformative. The action gets repetitive amazingly fast, and stays that way.

Unlike the original RICO, there’s no real feeling of progression, you don’t get to chart a path to your target, completing multiple objectives along the way. You don’t even feel like you’re in an actual building, the way you seemingly always simply move forward, with the odd room offering two doors to go through rather than one – one of them undoubtedly leading to a dead end. It’s simply a slog. 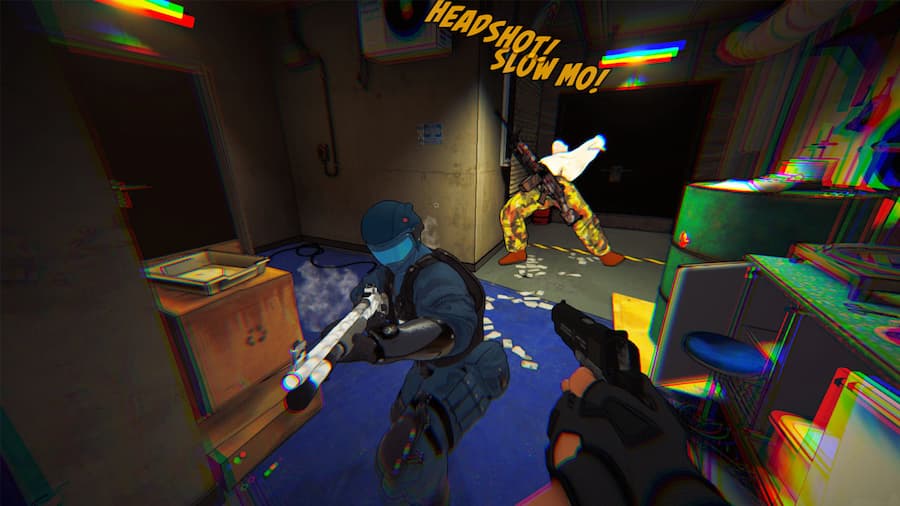 Complete a floor, and you’ll find that the next offers nothing new other than some fresh scenery. The only excitement you’ll encounter is when you come up against a particularly troublesome foe who puts up more of a fight. The rest are either easily taken out during slo-mo, or can be baited into entering the doorway you’ve just breached for an easy kill.

Those doorways also hamper one of RICO London‘s much-lauded features: co-op. Both split-screen and online co-op are available, but it’s not a great deal of fun when one player hardly has a view of enemies in a room after breaching. With rooms and corridors being so small, it’s also very easy to get in each other’s way in general.

At least RICO London looks fairly nice. The comic book stylings of the visuals give it a lot of character, and it’s sharp and colourful whether you play in handheld mode or docked. But those visuals come at a price. The framerate is inconsistent, especially when docked, which hampers the gunplay. There are other technical issues as well, such as poor audio balancing and distorted audio at times. And there are a plethora of glitches.

I’d say that glitches have been the source of most of my enjoyment when playing RICO London, actually. Some enemies appear to breakdance after they’ve died, flinging themselves around the room in an entertaining fashion until they simply disappear. Others nod their hands or swing their arms rhythmically, as if they’re grooving on their way to the bright light at the end of the tunnel. I’ve even seen some miscreants get flexible and do the splits. 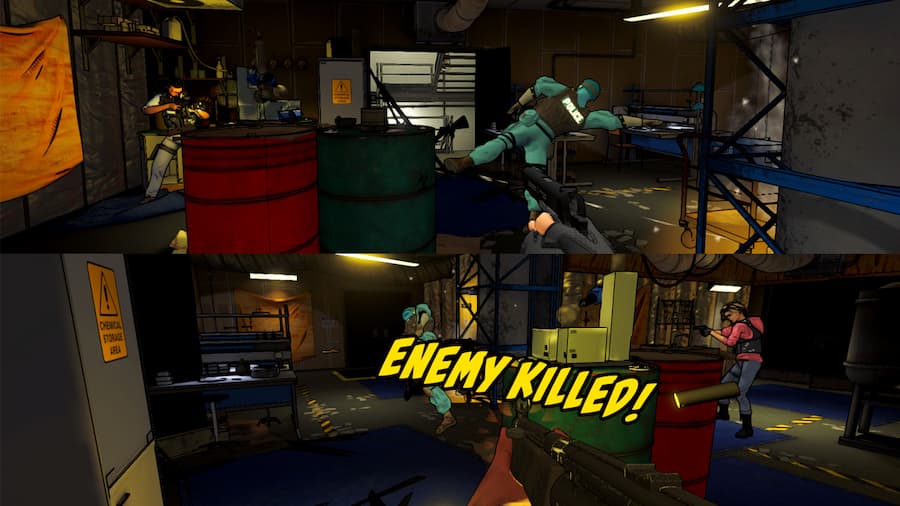 Outside of Operation mode, there’s the option to take part in a Daily Challenge that offers more of the same repetitive action and… that’s it. It has a leaderboard though, so score chasers might get a kick out of it. Overall, it feels like a very light package. The original RICO at least had Quickplay and Challenge modes to offer something a little more accessible and different.

I honestly don’t know what’s happened with RICO London, and I can’t recommended it to anybody, not even ardent RICO fans. It’s an utter failure of a sequel, discarding many features of the original game to deliver something that feels awfully basic. Add on top the technical issues, and you have a game that should be avoided – unless you find the monotony of breaching and clearing rooms ad infinitum strangely compelling.

This review of RICO London is based on the Switch version, with a code provided by the game’s publisher. It’s available on Switch and PC, with PlayStation and Xbox versions coming later. 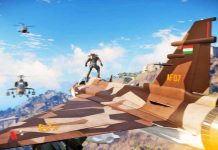