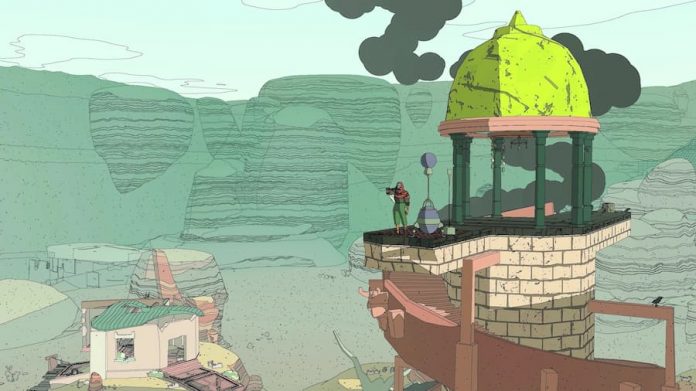 A journey filled with highs and lows, Sable is undoubtedly unique, but it’s also got its fair share of problems.

You take on the role of the eponymous Sable, a child brought up in a small village rife with traditions and routines. One such tradition is Gliding, a rite of passage for young members of the tribe as they come of age. Like a meaningful gap year of sorts, the Gliding sees a youngster set off into the world by themselves for the first time, travelling to far-off locations, meeting new people, and taking on all manner of tasks.

Unlike most gap years however, Gliding isn’t just about wasting time and your parents’ money; it’s about finding yourself and discovering what you want to do with the rest of your life. In Sable, you’ll be helping Sable earn badges by completing various tasks; three badges in the same field means she can exchange them for a mask, and having a mask means she can then pursue a life working in that field.

Getting badges means taking on quests from people that you meet on your travels. Some of them might be fairly straightforward – simply going to a new location to deliver a message, perhaps. But others are more involved, and will see you solving environmental puzzles, traversing dangerous environments, and more.

Well, I say ‘dangerous environments’; you won’t die in Sable. Falling from a great height simply sees you back at the bottom again, faced with having to repeat the climb you’ve just done. Traversal is something you’ll be spending the majority of your time doing. Sable has a Breath of the Wild-style stamina meter, which depletes as she climbs up surfaces. She can climb up practically anything, though; rocks, walls, giant bone structures, you name it – if it’s in a vertical position, Sable will try to climb it. Sometimes she’s a little too eager to achieve verticality and simply walking too close to a wall will see her eagerly cling to it. Her stamina isn’t great, though, so try to climb something too high and you’ll undoubtedly see yourself falling right back down. 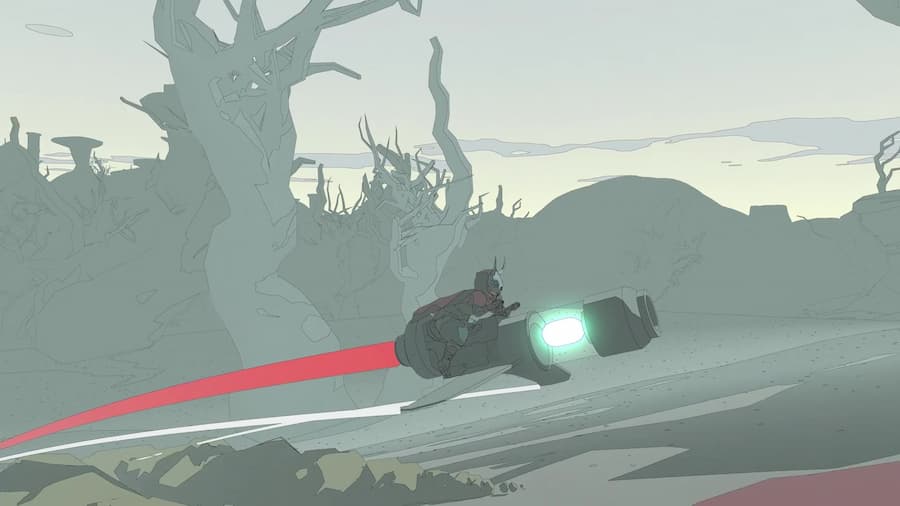 The reason Sable won’t take fall damage is because of a special rock she carries with her; a rock that envelops her in a special bubble that allows her to glide and float through the air. If you fall, it’ll automatically appear just before impact, softening your landing. But with the press of a button, you can turn a short jump into a glide. Doing so off the top of a tall structure, effortlessly gliding through the air, is one of the greatest joys in Sable.

Along with her gliding and climbing abilities, Sable also has a hover bike to help her travel around the world. It’s much quicker than travelling on foot, and if you’re so inclined you can spend time and money on upgrading and customising the bike. It’s an important part of Sable’s journey, but ultimately it’s up to you how much attention you want to give it.

That’s something that’s true for the majority of Sable, in fact. This is very much your journey, and what tasks you complete, and how many or how few you get involved in, is entirely up to you. Sable can return home rather quickly, after doing the bare minimum number of missions involved to acquire a mask, in fact. Or she can stay out in the world indefinitely, seeing and doing everything it has to offer. Bringing your Gliding to an end too prematurely means you’ll miss out on the full experience Sable has to offer – but chances are you might be ready to call it a day before too long.

Some players will really get a kick out of the freedom that Sable offers. It’s easy to draw parallels between it and Breath of the Wild; a huge world that you’re free to move around in, with no real priority or order to what you achieve. You have a handy compass which points you in the general direction of where a certain objective is, but it’s ultimately down to you to find where you need to go. Others give you no direction at all, relying on you to chart your own path. It’s nice not to have your hand held, but some optional guidance would also be useful from time to time. It’s easy to get lost in Sable‘s world.

Part of that is down to Sable‘s art direction. A 3D world made of 2D line drawings, it’s a striking-looking game alright, but it doesn’t always make for the best environment to explore in. Add to that the depth and verticality, and it’s easy to find yourself helplessly navigating mountains and valleys to no avail. I’d imagine how you feel about Sable‘s visuals will be very much a matter of personal preference. For me, it’s beautiful when still, but impractical in motion. It doesn’t help that the camera can be problematic, jumping around and panning through walls when you’re in a tight place.

But even when you’re not getting lost, you may find yourself getting exhausted with Sable‘s quests. Outside of towns and settlements, the game’s world is vast but barren, so you’ll spend a lot of time on the back of your hoverbike, riding through nothing-land. (Thankfully, fast travel exists, so getting back to somewhere you’ve already been is much easier.) Many of your quests will ultimately boil down to the same thing, too; travel to location, retrieve item or talk to person. Tedium can set in, and it can feel like you’re simply ticking things off of a very big to-do list. Which, in essence, is exactly what you’re doing.

Sable does have a lot of things going for it, though. Its writing is beautiful and intelligent, providing more depth to the world and its people than you could hope for. Rather than simply rehashing lines of dialogue, engaging in conversation with a character out in the world gives you Sable’s thought process, providing flavour text and allowing you to better understand who your main character is. You can even shape that a little by making dialogue choices along the way. They don’t seem to amount to much, but it’s a nice touch all the same.

Being free from combat also makes Sable stand out from the crowd. Sure, a seemingly action-less game won’t appeal to everyone, but it’s a welcome change of pace. There’s no threat or urgency in doing what you do; you don’t need to worry about running into a bandit while out exploring the world. Stop and explore an abandoned ship if you want; there’s no threat of being ambushed by doing so. It offers Sable a level of freedom rarely seen in games. Sure, being able to go anywhere and do whatever you want is old hat to anyone who’s played a modern open world game – but doing that without the worry of wandering into a fight you’re not prepared for is refreshing.

If the idea of a game that offers you a true sense of freedom appeals to you, you’ll undoubtedly get a kick out of Sable. Its expertly-crafted narrative alone will inspire you to keep going, but repetitive quests and an often barren world may dampen your spirits a little. Still, there’s a lot to enjoy here, and if its art style resonates with you, you’ll find it easy to lose hour after hour in Sable‘s unique world.

This review of Sable is based on the PC version, via a code provided by the publisher. It’s available on Xbox One, Xbox Series X/S and PC. 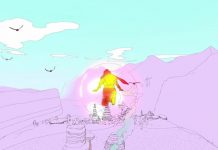