Aliens invading your city? Talk about a major inconvenience.

That’s the predicament that Timothy, the titular lead character of Timothy’s Night, finds himself in. This noir-style action game takes us back to 1940s small town America, into a world where gangsters rule. Our Timothy’s a gangster too, but it’s not mobs or the police he’s got to worry about; it’s aliens. They’re everywhere. And equipped with a range of weapons and a handy time-slowing skill, Timothy’s got to deal with them single-handedly.

Timothy’s Night isn’t a brand new game – it’s essentially an updated re-release of 2019’s Timothy vs the Aliens. It’s the same game, but this exclusive PS5 version packs in extra content, enhanced visuals and DualSense implementation. The latter is perhaps the most impressive thing about Timothy’s Night; this is a true showcase of how nice the DualSense can feel in your hands. It’s just a shame that little else about the game impresses.

Despite developer WildSphere stating the game plays at 60fps at a 4K resolution on PS5, it certainly doesn’t feel like 60fps. Controlling Timothy feels sluggish, often like you’re moving through molasses. It makes manoeuvring through the town arduous and dull, especially when mission markers simply highlight an area of the map rather than a specific point. Cue wandering around in circles until you find exactly what you’re looking for, with pesky aliens spawning around you all the while. 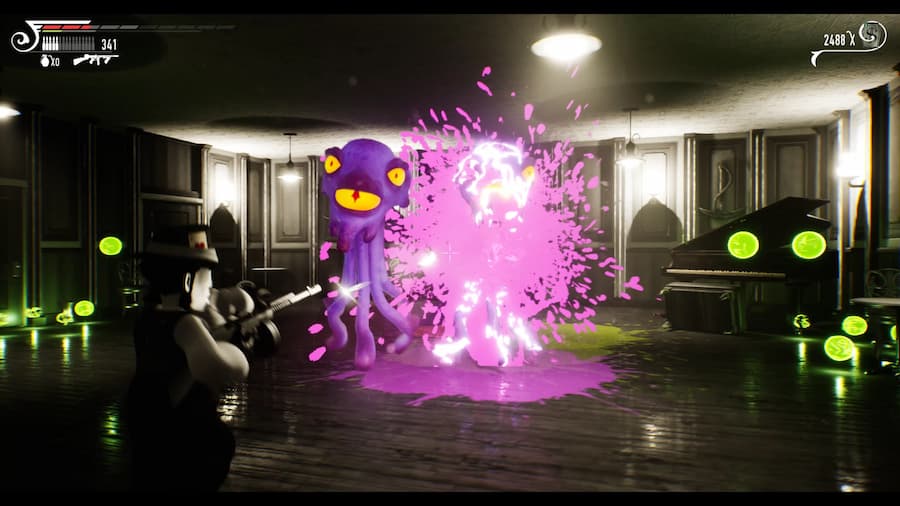 Much of your time with Timothy’s Night will be spent shooting aliens, in fact. They’ll spawn in only when you’re close, so be prepared to suddenly be surrounded when only a moment ago the alleyway you turned down was clear. Gunplay is adequate but far from perfect. No aim assist means aiming with a controller is fiddly at best; if you’ve not got fast reflexes you’re going to be in for a tough time. You’ll start out with only a pistol, with more weapons becoming available as you progress. Thankfully your pistol has unlimited ammo, but you’ll have to buy or find ammo for the rest. It’s rather scarce, so you’ll find yourself relying on your less-than-stellar pistol at inopportune moments.

The game tries to mix things up by throwing in some different kinds of gameplay. Occasionally, you’ll find yourself platforming through dark and dingy sewers, or jumping from beam to beam high up on a construction site. A few minigames allow you to race a car through checkpoints, or hunt around the city for lost items such as hotdogs or packages. It’s… fine. Platforming is adequate, even if Timothy never quite feels like he’s going to make the jump. Driving is rather cumbersome, but it’s serviceable.

In its favour, Timothy’s Night is at least a rather pleasant-looking game. Mostly presented in monochrome to really nail the noir aesthetic, enemies and key points in the environment will appear in colour, really popping out of the screen. Aliens are gelatinous blobs that come in various shapes and sizes; purposefully schlocky designs that look like something from It Came From Outer Space or some other 1950s sci-fi movie. There’s a nice use of light and reflections here, so despite cartoon-like character models there’s a realistic feel to the environments you’ll find yourself in. 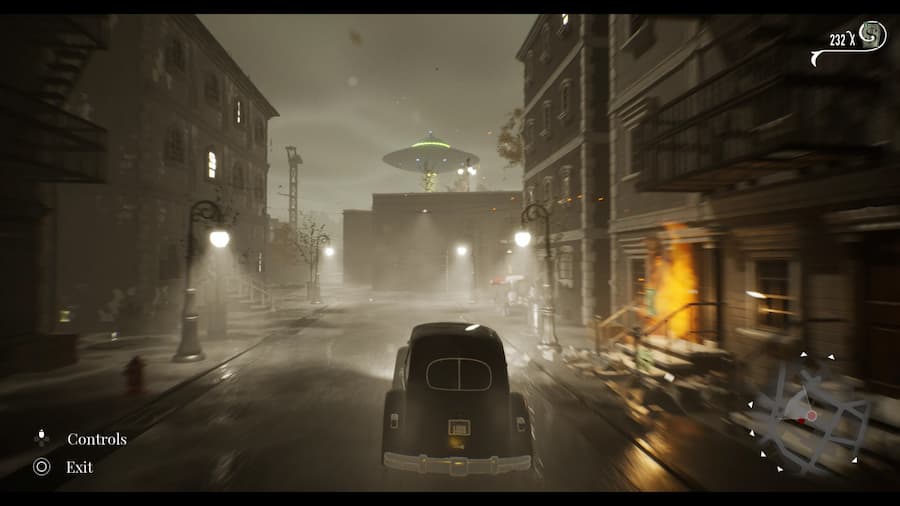 As I mentioned above, the real stand-out feature of Timothy’s Night is its DualSense implementation. Right from the game’s loading menu, you can feel the pitter-patter of rain vibrate through your palms, and hear the light droplets bounce on the ground from your controller’s speaker. Once you’re in the game, you’ll feel every step Timothy takes, adding a level of immersion you wouldn’t expect from a game like this. The adaptive triggers even react to what gun you’re using, with the resistance changing between a shotgun and a pistol. It really is a showcase of the DualSense’s capabilities, and I wish more games took this much time to make use of the hardware.

When stellar DualSense implementation really is the only highlight, however, it’s hard to fully recommend Timothy’s Night. Its visual style is commendable, and this is not a bad game by any means. But its gameplay – complete with sluggish movement, ho-hum gunplay and enemies that frequently spawn behind you – is just never particularly enjoyable. If you really dig the noir aesthetic you might get a kick out of it, but there are certainly better ways to spend your time.

This review of Timothy’s Night was facilitated with a code provided by the publisher. It’s available on PS5.