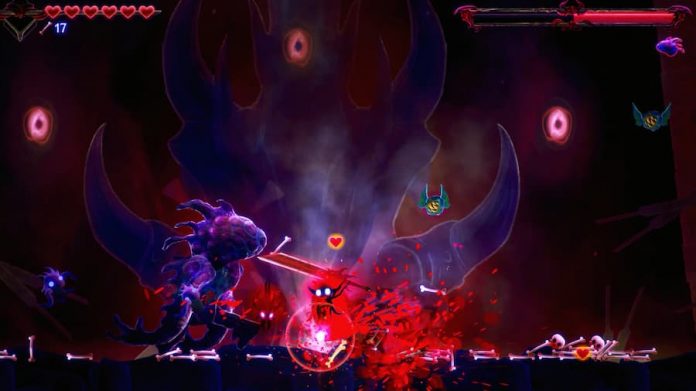 As Doomblade looks set to prove, if you want to safeguard the world, you should stop giving weapons ominous names.

If you do happen to craft a weapon of ultimate power, or find one lying around, you should name or rename it something relatively innocuous. That axe that can carve through any metal? Call it Arse Scratcher and no-one will think twice about picking it up. Avengers: Infinity War would have been a lot shorter if the stones were called Crappy Pebbles or something like that.

But no, someone called the Doomblade the Doomblade and, in this action Metroidvania of the same name it’s “Hungry to wreak its revenge on The Dread Lords, who bound and trapped it in the Underworld.“ And, wouldn’t you know it, your diminutive creature, Gloom Girl, is its wielder. What could possibly go wrong?

Unveiled at the Escapist Indie Showcase, Doomblade looks like it could be quite the blood-stained ride; in particular, we’re curious to find out how it handles given that the sword seems to be dragging Gloom Girl along with it. There’s certainly a lot of zooming back and forth in the trailer, which makes us wonder who’s really in control.

Doomblade doesn’t have a solid release date as yet, but it’s set to land on the PC some time in 2022. In the meantime, if wielding an improbably large and almost certainly cursed sword appeals to you, you can wishlist it on Steam.