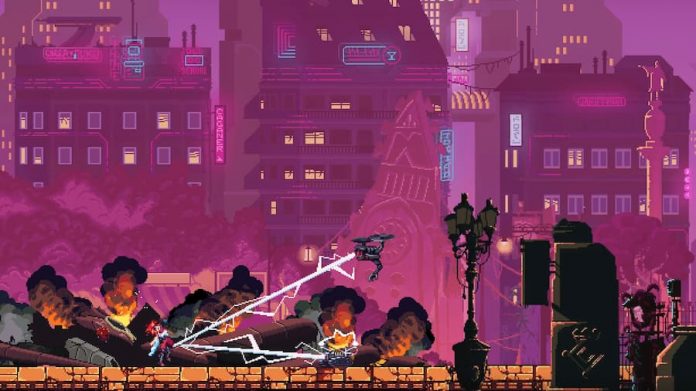 Aeon Drive is a 2D platformer for those who like to live life in the fast lane.

It’s not a good day for Jackelyne. A space ranger, she’s crashed her ship and is now stranded in Neo Barcelona. But there’s a ray of hope – if she’s fast enough, she can dash through the neon-lit streets and recover the drive cores she needs to once again take flight. She’ll be saving the city from impending doom in the process, too. And so begins Aeon Drive, a game with speedrunning at its core.

Aeon Drive‘s campaign mode presents players with 10 sectors of Neo Barcelona to dash through, each split into 10 levels. So, that’s 100 levels overall, which is a number that isn’t to be sniffed at. Still, with you aiming to complete each level in under 30 seconds, you could technically be done with Aeon Drive in about an hour. But chances are you’ll have to repeat many levels multiple times before being successful, bumping that playing time up considerably.

As Jackelyne, your goal is to reach the exit point on each level, avoiding obstacles, hazards and enemies along the way. It can be tricky with only thirty seconds on the clock, and should time run out it’s game over. Thankfully you can extend the time available if needs be by finding canisters of energy and then activating them. But you don’t need them, and by using them you’ll certainly not be at the top of the speedrunning leaderboards.

Running and jumping are the bread and butter of your actions here, but Jackelyne does have some other tricks up her sleeve. She can throw a dagger, for example, which will stick into objects such as walls and allow her to teleport to them. It’s a handy manoeuvre for getting through tight gaps or laser beams blocking her path. Some tight gaps at ground level can also be slid though, and both the dagger and slide manoeuvres can be used to damage enemies. Jackelyne has another blade that can be used to slice them at close range, too. 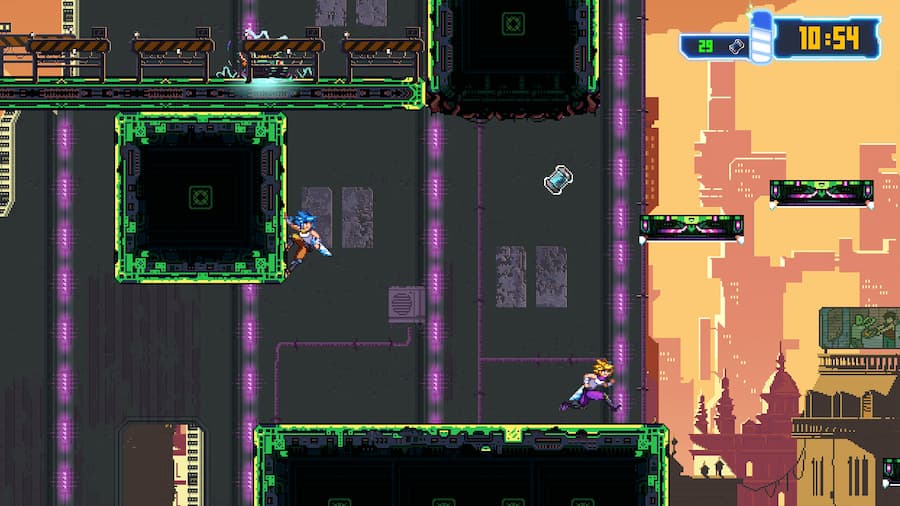 You’ll need to employ all of the moves available to Jackelyne to complete the levels as quickly as possible, and only one of them feels counter-intuitive at times, which is the wall jump. You’ll need to hold the direction of the wall you wish to spring from, otherwise Jackelyne won’t stick to it for you to jump away from it. Getting the timing just right, then, can be a bit finicky. Steer in the opposite direction a little too early and Jackelyne might not wall jump at all. A little too late and you might lose valuable momentum.

Still, after a while you get used to this little hiccup, and it doesn’t affect your enjoyment of the game too much. And there is a lot to like about Aeon Drive. It’s colourful and fast-paced, and has a soundtrack that makes you want to move with haste. The addition of leaderboards for each level also makes it rather addictive. You’ll want to replay levels in order to try and climb up the leaderboards. 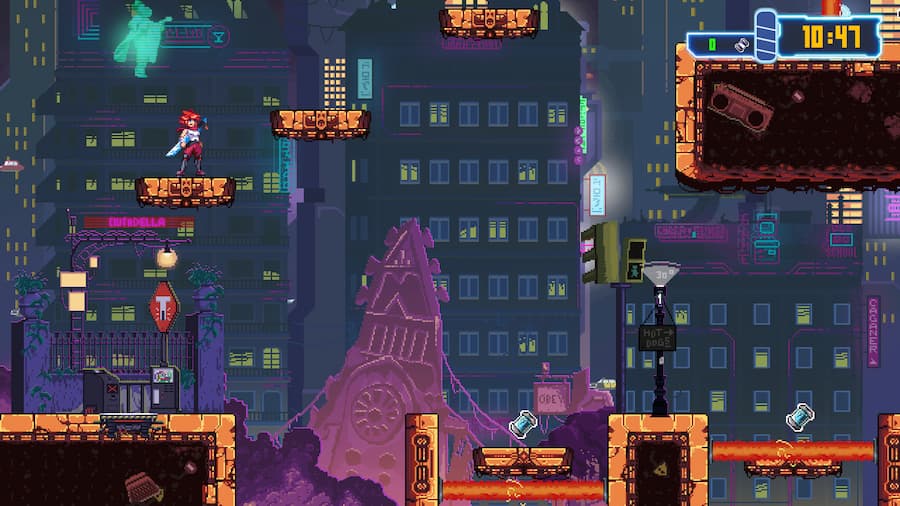 Aeon Drive is not a game that has be enjoyed alone, either. Up to four players can get involved in the game’s campaign, all racing to get to each level’s exit point in the quickest time albeit working as a team. And for those who do want to exert their dominance over friends or family members, there’s a completive multiplayer mode too. It’s just a shame that only local multiplayer is available – you can’t play with or against others online.

Those into speedrunning or action-packed platformers would be wise to check Aeon Drive out. While it’s not spectacular in any particular way, there’s little to find fault with here, and it’s fun to jump into if only for a few minutes at a time, attempting to finish new levels or improve your times on those you’ve already completed. And as ever, dashing through levels with a friend or family member by your side makes the action that much more enjoyable.

This review of Aeon Drive is based on the PS5 version, with a code provided by the game’s publisher. It’s available on PS4, PS5, Xbox One, Xbox Series X/S, Switch and PC.