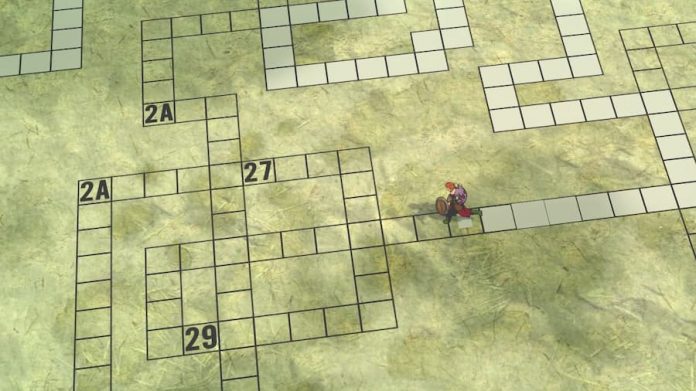 Dungeon Encounters proves that you don’t need a grand story and fancy visuals to create a compelling RPG.

Released to very little fanfare from Square Enix last week, Dungeon Encounters is a dungeon-crawling RPG that sees players explore a labyrinthine map that feels a little like a board game. You’ll move from tile to tile, occasionally coming across events and combat encounters. Ultimately your goal is to get as far as possible, which you’ll do by equipping your party with the best weapons and equipment you can find. But it’s not easy; even when you think you’re unbeatable, it won’t be long until you encounter an enemy much stronger than you.

It’s a wonder that more of a song and dance hasn’t been made about Dungeon Encounters. Some serious talent graces the credits of the game: it’s been directed by Hiroyuki Iko and produced by Kato Hiroaki, both of whom are known for their work on the Final Fantasy series. Character design is by Ryōma Itō, also of Final Fantasy fame, and the soundtrack has been overseen by Nobuo Uematsu, who surely needs no introduction. Needless to say, then, this has been brought to life by one hell of an accomplished team. Even without the fancy guise of a Final Fantasy game, with flashy cutscenes, complex worlds and deep stories, their work is clear to see here.

The gameplay flow of Dungeon Encounters is surprisingly enjoyable, particularly considering that you’re looking at a rather bland grid for most of it. But making your way around each dungeon’s tiles is rewarding, particularly when you come across a secret or an event. Every so often you’ll find, say, a riddle, which reveals the location of a secret somewhere else in the dungeon. Finding and solving these is a lot of fun, but it’s a shame they’re rather few and far between. The same goes for any non-combat event; more of them would make passing through each dungeon even more engaging. But combat is where you’ll be spending most of your time. 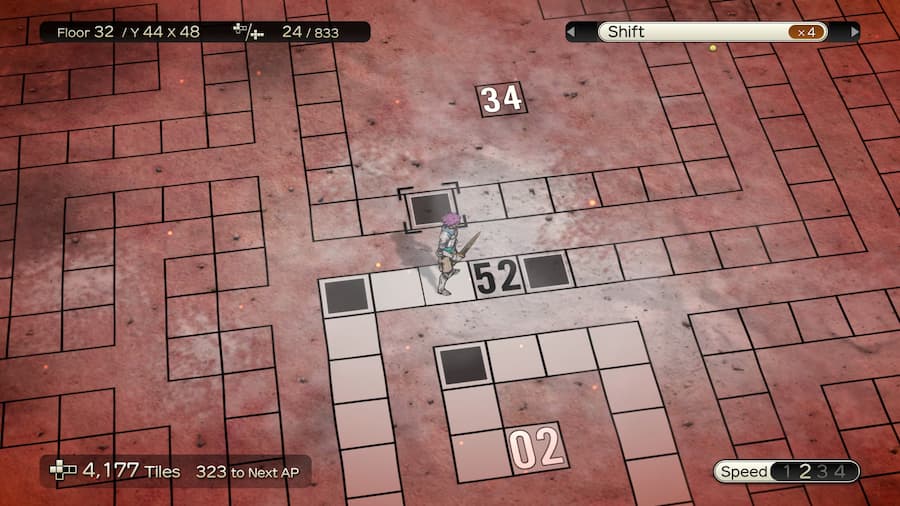 You’ll want to engage in as much combat as possible, because it’s by defeating enemies that you’ll gain experience, level up, and acquire money and new items. Without equipping new items you can never really get stronger, and so you’ll want to spend time regularly visiting your equipment menu to make sure you have the best possible items equipped. Combat itself is simple but challenging. You see, it’s not a simple case of wiping out an enemy’s HP. Every enemy has three meters: their physical defence (PD), magical defence (MD) and health (HP). They are defeated when their HP reaches 0, but before you can do that you first need to wipe out either their PD or their MD. If their MD reaches 0, you can then attack their health by continuing to damage them with magic. And if you wipe out their PD, then you’ll need to continue dealing physical damage to kill them.

The same is true for your party; each of your four members also has a PD, MD and HP meter. Your HP will increase naturally as you level up, but to increase your physical and magical defence, you’ll need to continually equip better and stronger armour and items. It can be slow-going to begin with; for the first couple of hours, enemies rarely drop items. But eventually, as enemies get tougher, their drop rates increase and you’ll soon have more equipment than you can ever possibly use. 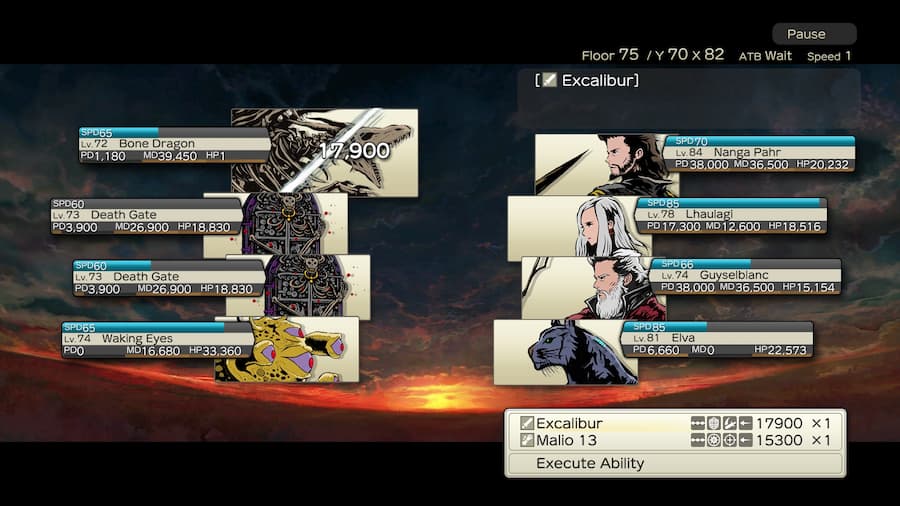 Battles are turn-based, making use of the Active Time Battle system you’ll be familiar with if you’ve ever played a Final Fantasy game. When a party member’s gauge fills, time stops, allowing you to decide how to act. You have two attacks to choose from – typically one physical and one magical, or you can choose an ability. Abilities are found as you explore the dungeons, though it takes a while until you find anything truly useful. Different weapons and magic attacks have different attack patterns. They’ll either attack one target, or all enemies, and they’ll either deliver a fixed amount of damage, or a random amount o damage up to a certain number. Finding the best type of attacks for your party, and having a healthy balance of them all can really make all the difference.

The thing with Dungeon Encounters is that it’s often rather stingy with what it gives you. I had to clear 10 floors before I had chance to visit a shop. It at least meant I’d built up plenty of money to buy better stuff, but it was a long way to go without really changing up my items. And while initially, you’ll find resurrection and healing points on every floor, these get much less common the further you go, too. Thankfully you’ll eventually gain skills that let you revive and heal your party while in combat, but if you’re in a dire situation, backtracking to find the last healing point can get tedious.

It doesn’t help that simply finding something in Dungeon Encounters is a pain. There’s no way to zoom out your map or see an overview of the tiles you’ve already passed over. Simply finding the exit to the next floor can be tricky. The only indication of a location you’ll be given is a series of co-ordinates; a floor number, and an X and Y axis number. I’ve found that jotting down important locations – the exit if I plan to continue exploring; the last healing point I came across – can be really helpful and can save a lot of endless wandering.

Almost 1,000 words in, and I feel like I’ve barely scratched the surface of what Dungeon Encounters really is. For a game so simple to look at, it packs in a surprising amount of depth; a lot of which you won’t even begin to uncover until you’ve already been playing for several hours. There are some really clever mechanics here, like higher-level characters that you can unlock by finding their location on the map. Or the fact that if your entire party gets wiped out, you’ll need to ‘start again’ with new characters – but returning to the square where you died will allow you to pick those characters back up and get them back to good health. 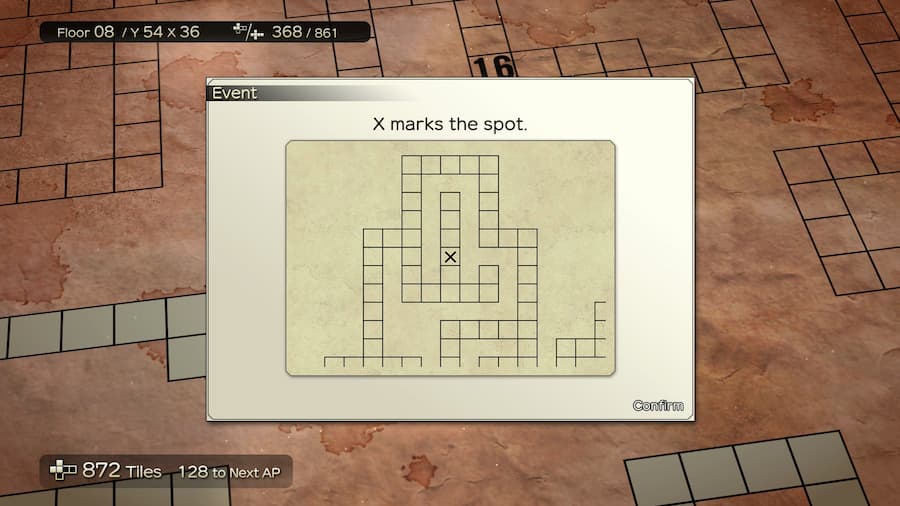 There’s a lot of content here, too – 99 floors to work your way through in fact, if you’re up for the task. It’s the sort of game that I can’t imagine many people will be able to sit and play for hours on end; there’s no denying it does get repetitive. But it’s a simple gameplay loop that feels good to get into the groove of, and as such, it’s the sort of thing you’re more likely to play for an hour or two at a time, jumping into every day. It gets tiresome, but it leaves you excited for the next time you play; the lure of better equipment and gaining strength is just too much to keep you away.

With some serious talent behind its creation, Dungeon Encounters deserves much more fanfare than it has so far received. This might not be as flashy as a typical RPG from Square Enix, but it’s clever, it’s engaging, and its simple but deceptively deep gameplay loop will keep you coming back for more. Add to that a killer soundtrack overseen by Nobuo Uematsu, and you’ve got something rather special on your hands.

This review of Dungeon Encounters is based on the PS4 version (played on PS5), via a code provided by the publisher. It’s available on PS4, Switch and PC.