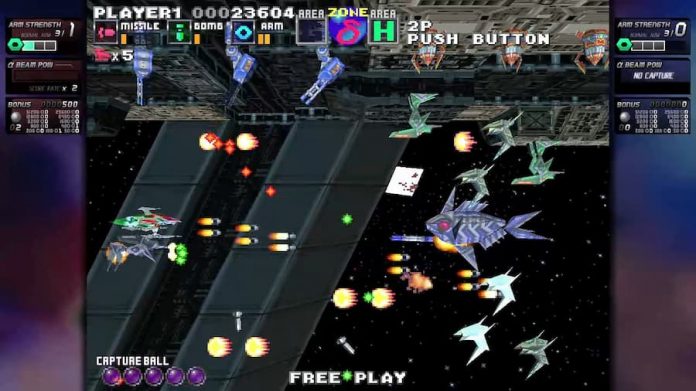 Many consider G-Darius to be one of the greatest shoot ’em ups of all time.

It certainly impressed way back in 1997, when it was originally released. The first game in the series to feature 3D graphics, it wowed anyone who glanced at it, with its polygonal environments, player ships and enemies giving the action more depth and flamboyance – it particularly made boss encounters more exciting. Despite the 3D visuals, however, the gameplay remained on the 2D plane and stayed true to Darius‘ roots.

Fast forward more than 20 years, and both PS4 and Switch owners can now enjoy G-Darius thanks to G-Darius HD, a package that includes the original game and a remaster of it with cleaner, sharper visuals. Though no matter which version you play, you’ll still find it to be a little of an eyesore these days. It would have perhaps been better if G-Darius had been remade rather than simply remastered; its primitive 3D graphics just don’t clean up all that nicely, unfortunately. But more important is how G-Darius HD plays.

Like Darius games before it, G-Darius has players moving from left to right, blasting pretty much anything that moves. Along the way, numerous power-ups can be collected, improving either the player’s ship’s forward-firing guns, protective forcefield, or downward-firing bombs. They’re perhaps a bit harder to upgrade to max level than in previous Darius games, however, and all upgrades are lost upon your ship’s destruction. So, die when facing off against a boss, and things are going to get much harder.

Adding further depth to the action is an enemy capture system. Players have a number of capture balls that can be fired at enemies and even sub-bosses, and if successful, they can be forced to fight by your side for a short while, offering you protection or increasing your firepower. It’s up to you though, if you’d like to sacrifice your new companion in order to create a powerful explosion, or absorb their energy to power a laser beam for a short period of time. 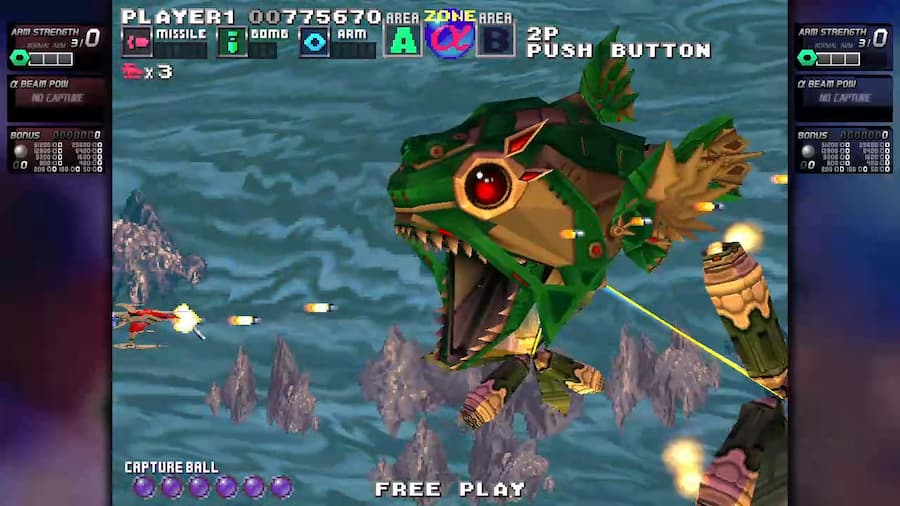 Absorbing an enemy’s power to enable the use of the laser beam is particularly important when it comes to bosses. Use the laser beam against a similar attack instigated by a boss and a laser beam-duel will commence. Tap the fire button like a mad-person to win the duel and your beam will grow in power, severely damaging or perhaps even killing a boss outright. It’s pretty nifty, and makes some otherwise drawn-out fights much more enjoyable.

The trouble is, G-Darius HD does a poor job of explaining any of its more advanced systems, leaving some players struggling in the dark. It’s all hidden away in a digital instruction manual that’s easily overlooked. And truth be told, even with knowledge and application of the capture and laser beam systems, it’s still an absolutely brutal game. There are difficulty options and additional crutches like infinite continues, but it’s simply not fun powering through the game if you’re not skilled. 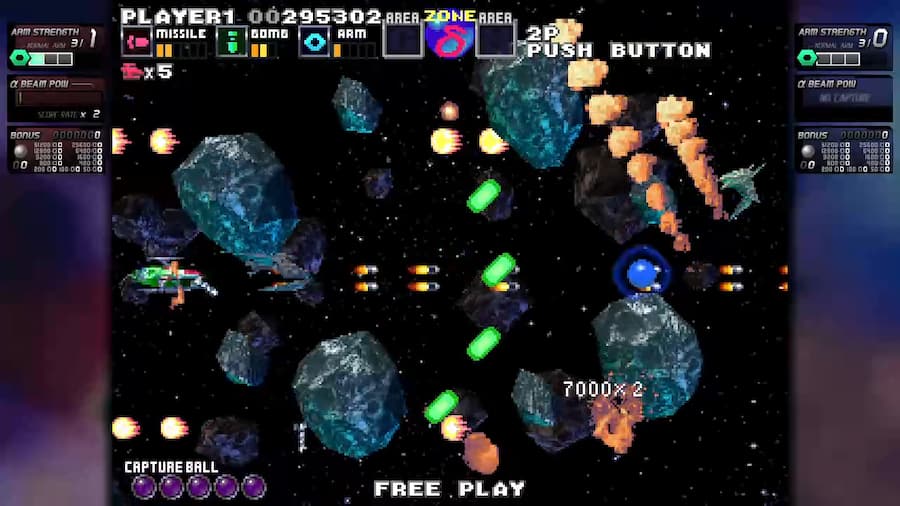 Those who are up to the challenge, however, will find a lot to like about G-Darius HD. Its branching structure which has players tackling five of the 15 available stages on any given run isn’t new but is still very much appreciated, as is the fact that some stages also offer multiple routes. Some of the boss fights are also pretty epic, at least once you’ve learned their patterns so you don’t fall victim to their unpredictable attacks.

With the usual quality of life features added into the mix, such as screen options, save state support and more, G-Darius HD is easy to recommend to series fans with the skills to do it justice. Its dated visuals and rock-hard difficulty level, however, means it’s not likely to impress newcomers. It’s not a bad game by any means, but it’s hard to not feel like more could have been done with G-Darius HD to make it a more accessible and attractive package overall.

This review of G-Darius HD is based on the PS4 version (played on PS5), with a code provided by the game’s publisher. It’s available on PS4 and Switch.