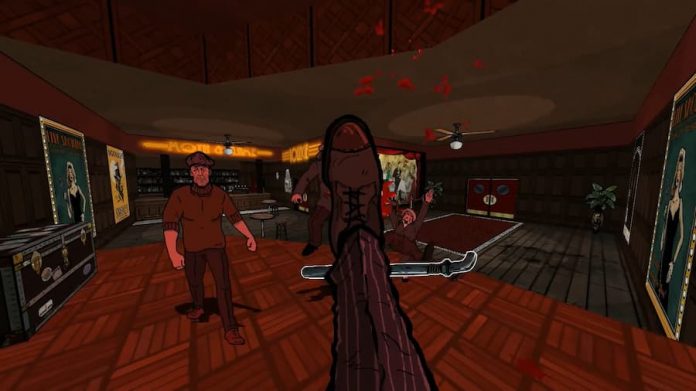 Fallen Aces, an FPS with a 1920s gangster aesthetic, now has a playable demo.

The demo dropped at the beginning of the month, so you can file this under things-we-missed, but we’re so glad it popped up on our radar. Aside from cribbing from black-and-white gangster films, it also apes early 90s shooters, right down to the way enemies start looking like cardboard cutouts if you get too close.

In short, this is the game we wish we’d had in the 90s, never mind Kingpin. The demo’s relatively short but it’s a real rush to play. You’re cast as a vigilante, aiding the city’s primary superhero and.. oh, who we are we kidding, you’re a sidekick, but that doesn’t mean you can’t have some fun.

Stealth is sometimes an option, but you can kick, punch, shoot, hurl things, all in the name of dispatching enemies who could have stepped right off the cinema screen. It’s not exactly open world but you’ve got a fair amount of freedom, so it’s up to you how much bloody mayhem you inflict. But the animation is so spot-on, it’s hard not to go hog wild.

It’s fun even you’re not punching mooks in the face; listening to your character’s narration, (think a prohibition-era Max Payne) is a joy. That said, if you’ve absolutely no love for The Untouchables or its ilk, you might find Fallen Aces less appealing. But dabbling with this short demo has left us wanting more – we’re already Googling “Where to buy spats”.

You can download Fallen Aces’ demo and wishlist the game here. There’s no release date, other than “soon”, but this is definitely one to watch.