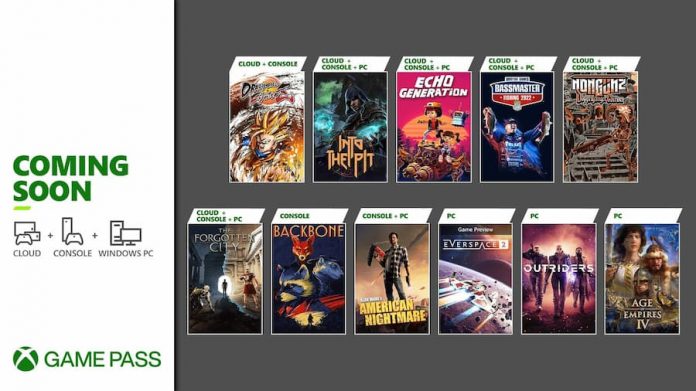 Xbox Game Pass really is the gift that keeps on giving.

It was only two weeks ago that I was writing about Back 4 Blood, The Good Life, Ring of Pain and more landing on the service. And already, Microsoft has announced eleven more titles making their way to Xbox Game Pass in the next two weeks.

Perhaps the biggest title coming to console via Xbox Game Pass is Bandai Namco’s Dragon Ball FighterZ, a game that we loved when it released back in 2018. In our review, we said: “From its stunningly sharp and wonderfully animated visuals to its frenzied gameplay, there’s just something utterly charming about it.”

Also noteworthy, though, is The Forgotten City, a fantastic indie title which only released earlier this summer to critical acclaim. It’s a unique and interesting game that sees you time-travelling back to the days of the Roman Empire, and judging by our 8/10 review score, we’d say it’s very much worth checking out.

There’s also Alan Wake’s American Nightmare, an Xbox 360-era standalone expansion to Alan Wake. And if you’ve recently played Alan Wake Remastered, you might be looking for an excuse to spend more time with the troubled author, so this is perfect timing.

Over on PC, subscribers can look forward to jumping into Age of Empires IV on day one, and Square Enix’s enjoyable looter-shooter Outriders.

Here’s the full run-down of what games are coming to Xbox Game Pass in the remainder of October.

Alas, when new games get added, older games must go. On 31st October, seven games will be leaving Xbox Game Pass. Remember to play them before they leave, or buy them for good and make use of your Game Pass discount. They are as follows: