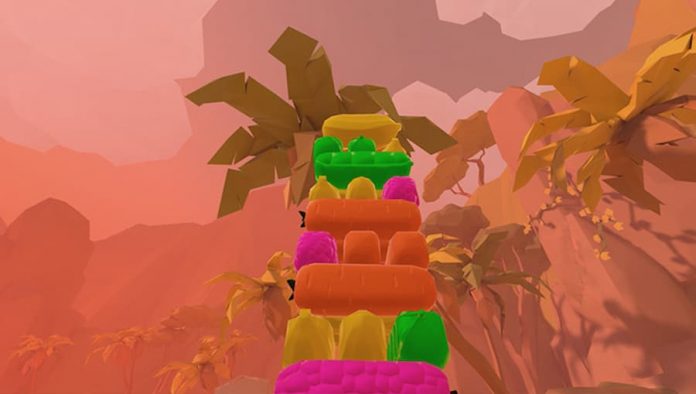 Wonder what you’d get if you blended Jenga with Tetris? Jentrix has the answer.

Out now for Oculus Quest, Jentrix has you dealing with a Jenga-like stack of fruit-shaped blocks. But the fun/stressful twist is that, every few seconds, a new level of blocks spawn on top of the tower. Put three similarly-coloured blocks next to each other and they all disappear, Tetris style. Though, as you might expect, whipping out a block to put it somewhere else risks the entire tower toppling.

The good news is, despite sounding supremely stressful, Jentrix is a lot of fun to play. I took it for a brief test drive and got a real kick out of it. What’s particularly cool is that, while you can rotate the stack using the thumbstick, if you’ve got enough space you can walk around it, stroking your chin and pretending you’ve got some kind of masterplan. Because you inch the blocks out in VR, instead of pointing and clicking at them, you get that wonderfully disquieting moment where you’re unsure if you’re going to get away with removing a block or not.

It’s mercifully more forgiving than Jenga in that it’s harder to make the tower collapse – and the blocks are big enough that you’re not squinting. The trade-off, though, is that it’s possible to knock individual blocks onto the floor. You don’t lose the game, but one of a row of birds will take flight; if they all flap off, you’re done. You also might find that one or more of the fruit blocks has been replaced with a crocodile or that a penguin has frozen your block. It’s not that Jentrix ever gets boring, but I certainly don’t begrudge the game mixing things up just a tad.

One snag is that it’s an “App Lab” title, meaning it’s not been tested by Oculus themselves, so it doesn’t have the Oculus stamp of approval and could have quality or content issues. I didn’t run into any problems but the possibility is there. Also, a multiplayer mode would have been a welcome addition, preferably with built-in matchmaking, but you’ll still get a kick out of Jentrix’s solo shenanigans.

Jentrix is out now on Oculus Quest 1 and 2 for a meagre £7.99. Give the trailer a watch below.