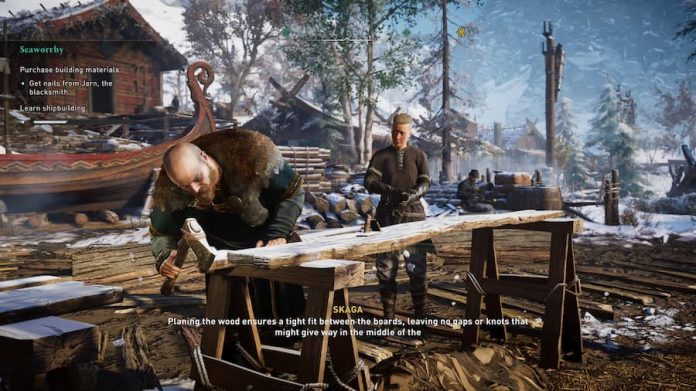 It’s the third entry in the Discovery Tour series, but what makes it particularly interesting is that it’s not just some static museum, this time around you’re learning through engaging with a a specifically-written storyline. Cast as an entirely new character, you’ll get to build boats, ride with Christian missionaries, learn about Norse gods and more.

In other words, you can sit Little Billy down in front of this and not come back to a massive pile of corpses, though he’ll probably still wonder why Thor looks nothing Chris Hemsworth. Yes, the Assassin’s Creed has always featured historical elements and characters but they were secondary to the increasingly convoluted Assassin/Templar story. And, as this story from NotAlwaysRight shows, it’s not a good idea to take them at face value.

So how do you get your hands on Discovery Tour: Viking Age? There are two ways. Firstly, you can download it if you already own Assassin’s Creed Valhalla on any platform. Or you can get the standalone version for PC. Why PC? Because, in the workplace, teachers and other educators are more likely to have access to a PC for work, though they’ll still need a reasonably recent one to get Discovery Tour: Viking Age running well. Next year, the stand-alone version will also come to Amazon Luna and Google Stadia.

You can check out the above trailer for a taste of what’s on offer and learn more about Discovery Tour: Viking Age on Ubisoft’s website.