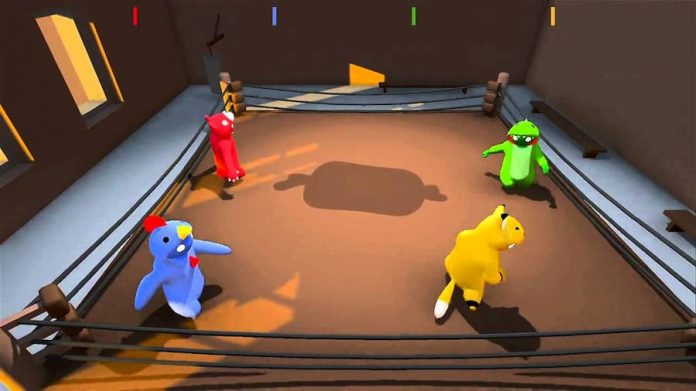 Wibbly wobbly beat-em-up Gang Beasts is coming to the Nintendo Switch next week.

Update 6/10/2021: Gang Beasts was originally coming to the Nintendo Switch this week, but we’ve since been informed it has been delayed till October 12th, so we’ve amended the article to reflect that.

This daft multiplayer-only fighter is arriving October 12th and will pit you against a variety of gelatinous foes, all of whom want to beat the living daylights out of you. That said, you’ll still have a fair chance as controlling your Gang Beasts character is a chaotic but entertaining trial. You might successfully hoof your enemy off a zeppelin but there’s just as much chance you’ll miss and stumble over the side.

Gang Beasts made our The Best Party Games on Xbox list, where we remarked that “slapping and jumping on your friends, or throwing them into a vat of goo, has never been so much fun.” So while it’s not going to figure into any Pro Evo fighting tournaments, the sheer ridiculousness of it all makes it an appealing outing.

And now, Gang Beasts is making the leap to Nintendo Switch. It’ll sport a massive 21 stages, bucket loads of costumes and, while it’ll require a Nintendo Switch Online membership for online multiplayer, it’ll support multiplayer on a single console. You know, so you can stare daggers at your “friend” when they hurl to your doom.

Gang Beasts will hit the Nintendo eShop this coming Tuesday October 12th, though if you’re looking to grasp a copy in your sweaty palms, it’s also getting a physical release on December 7, 2021.