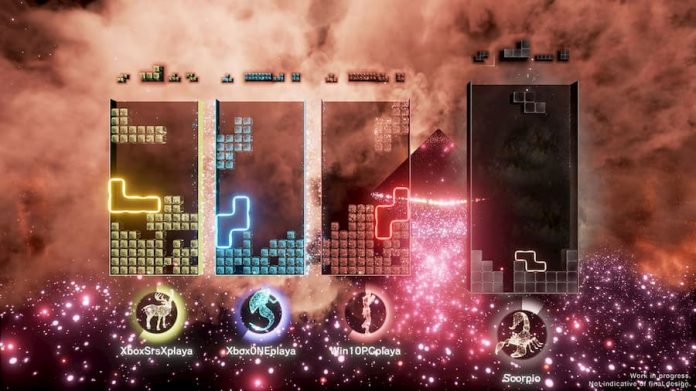 We’ve been wax lyrical about Tetris Effect before, as have most of the internet. This isn’t your typical Tetris game; it’s a tour de force of sight and sound, setting the popular block puzzle game against a backdrop of beautiful music and gorgeous displays of light and colour. And now, you can have that experience on the go thanks to its Switch release.

Today also happens to be the day that the Nintendo Switch OLED model releases, and we honestly can’t think of a better game to try out the brightness and sharpness of an OLED screen than this. It’s almost as if publisher Enhance planned it all along. Those sneaky tacticians.

When we reviewed Tetris Effect back in 2018, here’s what we had to say:

“Tetris Effect keeps you on your toes throughout, and it’s all the better for it. The constant change in pace – and the changing colours and themes of how the game looks – are tied perfectly to the music, making this very much an audio-led experience. You’ll want to crank up your speakers (or don a decent pair of headphones) if you really want to get the most out of it.”

Since then, the game has been updated to Tetris Effect: Connected, which adds a host of multiplayer options into the game. You can team up with up to three others to take on the game co-operatively, or battle against another player to see who can get the best score. Of course, the game’s original single player modes remain intact, making this one of the most feature-rich games of Tetris ever released.

Whether you’re new to Tetris Effect or a longtime fan, we’ve no doubt it’s a game worth picking up on Switch. Tetris is the sort of game that shines on a handheld; and the gorgeous music and visuals of Tetris Effect will be right at home here. Now if you don’t mind, we’ve got to pop out and pick up an OLED Switch.

Give the Switch launch trailer a watch below: