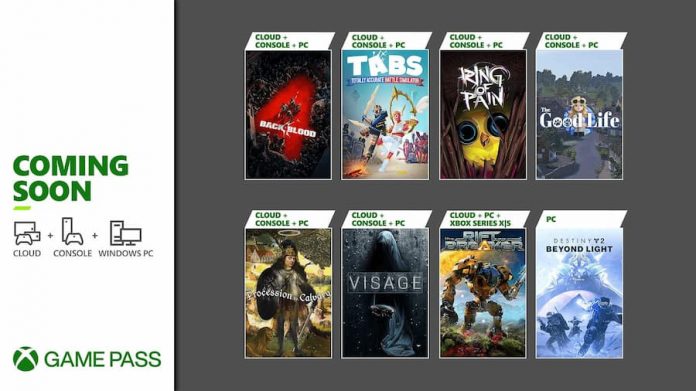 We write these “coming soon to Game Pass” articles so often that it’s hard to know what to call them.

It’s a good problem to have, though, because Xbox Game Pass simply continues to knock it out of the pack, providing incredible value for its subscribers. In case you missed it last week, Marvel’s Avengers was added to the service, along with day one release Astria Ascending, a fantastic-looking side-scrolling RPG. And today, Microsoft has announced eight more games making their way to Xbox Game Pass in the very near future.

Leading the charge is Back 4 Blood, which will be available day one with Game Pass when it launches on 12th October. If you’re a fan of Left 4 Dead you’ll certainly want to jump into this, as it promises more of the same co-op zombie-slaying action. We previewed it earlier this year and found it to be bloody delightful indeed.

Also worth keeping your eye on is The Good Life, another day one release which will hit Game Pass on 15th October. It’s from legendary game designer SWERY, and puts players in the role of a journalist who finds herself in a strange English village where everyone turns into animals. It already sounds delightfully bizarre, but if we know SWERY, we know even more twists will be in store.

The Visage is one for horror fans to keep their eye on. Coming to Xbox Game Pass on 7th October, it’s a first-person psychological horror, perfect for getting the blood pumping this spooky season.

Here’s the full run-down of games coming to Xbox Game Pass in the next couple of weeks:

And when new games come, others must go. A handful of games will be leaving on 15th October, so you have 10 days left to finish them up, or purchase them with a membership discount. They are: Gonner2, Heave Ho, Katana Zero, Scourgebringer, Tales of Vesperia HD and The Swords of Ditto.

Get a discounted Xbox Game Pass membership at CD Keys