Until you’ve mastered the game, death is inevitable in Diablo 2: Resurrected.

With hordes of enemies often thrown your way, and powerful unique enemies out to ruin your day, death can come rather easily if you’re not fully prepared or paying attention. And in Diablo 2: Resurrected there are considerable penalties for dying, unlike in Diablo 3.

For a start, whenever you die in Diablo 2: Resurrected, you’ll be transported back to town. But even worse, you’ll be naked. All of your items will remain with your corpse in the location of your death, so you’ll need to successfully travel back to your corpse to recover them. Or you can cheat if you don’t mind the map being reset. Simply pause the game, chose the ‘Save and Exit’ option, and when you then continue your game your corpse will be at your feet back in town. It’s a good way to get your gear back when you consider returning to your corpse a bit too risky. Just be careful if you’ve tried to recover your corpse and died again since, as multiple corpses will be left and quitting your game could put you at risk of losing valuable items.

Having to recover your corpse and its items isn’t the worst aspect of dying, however. Should you die, your hired helper will die alongside you, and it costs money to revive them. On top of that, you’ll lose a percentage of your total wealth equal to your character level, capped at 20%. If you’re carrying more then the penalty amount, the remainder of the gold you were carrying will be dropped at the side of your corpse. And so if you can’t make it back to your corpse, that gold will be lost. If you’re playing online, other players can steal your dropped gold, too.

There is a sneaky way to limit how much gold you lose, however. Only the gold you’re carrying and stored in your personal stash is counted in the calculation. So, store your gold away in the numerous shared stash tabs and you’ll lower the penalty upon death. You’ll want to carry some gold or keep an amount in your personal stash for buying things like potions or repairing equipment, though.

Upon progressing to Nightmare and Hell difficulties, dying becomes even more troublesome in Diablo 2: Resurrected as well. Each time you die you’ll lose a small amount of experience, setting your progression back a little bit. Die often, then, and you’ll not only find it to be costly, but it can also halt your level progression. You’ll never go down a level though, so you don’t have to worry about that.

Need more help with Diablo 2: Resurrected? Click here for the rest of our guides 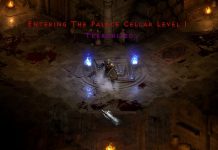