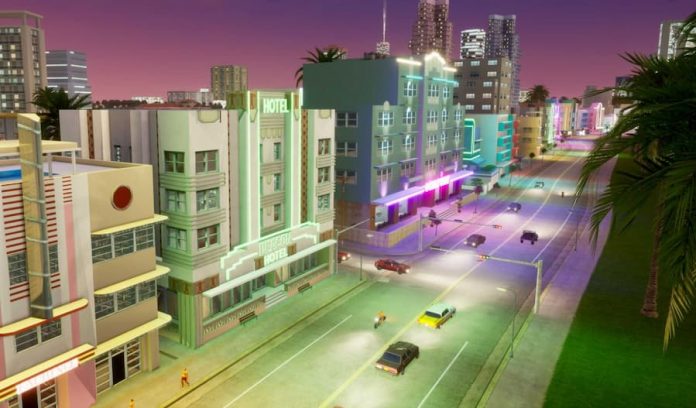 Having released such a long time ago, the original Grand Theft Auto trilogy of GTA 3, Vice City and San Andreas were all pretty good-looking in their day.

Nowadays though, not so much. With the new remasters almost here, though, we can look forward to jumping back in and enjoying the games with a bit of a facelift. And the thought of returning to them got us a little nostalgic. We got to thinking: What do we want to do first? Where can we go and what can we see and do to make the most of this new look?

And so, from side-missions to slot machines, here are our first stops in Grand Theft Auto: The Trilogy – The Definitive Edition.

1. Visiting The House of Tomorrow

Let’s start at the beginning, especially since it’s likely those on PlayStation will too, as they’ll see GTA III Remastered available on PS Now in December 2021. Liberty City has, of course, been seen in full HD in GTA IV – and what a gorgeous iteration that was – but this smaller, more quaint version, has its own selling points.

For one, how about a visit to House of Tomorrow? Since it’s only technology that makes life worth living, pay them a visit so they can upgrade your system and you can upgrade your life. Or head to Liberty City park. You know, I hear that this weekend and every weekend is the Medieval Millennium Fair where you can take part in “A Ride In The Park” side mission… or meet crooked Police Officer Ray Machowski in the toilets. OK, maybe we’ll give that last one a miss…

After that, see where the night takes you and have a boogie at Grand Theft Auto: Vice City‘s Malibu Club. Just take a left then a right off the top of the main Vice City strip and you can pull off into paradise. The Malibu Club was always the place to be, with Wang Chung, Go West or the Pointer Sisters and their various slightly-more-than one-hit wonders. The trouble was, despite their enthusiasm, the dance floor was only home to a smattering of club-goers due to the limited resources of consoles at the time. Maybe now we’ll see a more vibrant, lively, exciting affair with an actual throng of people, all dancing along with the YMCA tribute act.

Either way, get this club bought nice and early, as its side-mission string leads to an exciting conclusion and the $10k the club brings in regularly is very helpful.

3. Heading to the Top of Mount Chiliad

With such a large and varied area to explore, from beaches to mountains and everything in between, the world in Grand Theft Auto: San Andreas is our oyster. As are the oysters. Don’t forget to collect all 50 of them for some handy perks.

We think the first stop in this game will have to be the tippy-top of Mount Chiliad. The restricted draw-distances of the bygone consoles meant the view from Mount Chiliad was never that impressive. Sure, there was plenty of fun to be had sending innocent bystanders over the edge in their RVs, or flinging your buddy from the top ramp in the limited co-op mode, but you couldn’t really see anything. Now, we’re hoping you can see all the way over to San Fierro through the trees, or look out towards Los Santos across the highways. Maybe now, you’ll even be able to see Bigfoot!

Either way, grab the nearby parachute and the way down will be well worth the drive up.

When we’re done with all this, maybe it’ll be time to relax and take a load off. Where better to do this than in one of the many mansions throughout the games?

Whether it’s Don Salvatore’s home or even the Johnson residence, home is where the heart is. We’re looking forward to seeing each of these places in their full glory. The rest of the posh pads, too. Cedar Grove’s upper-class estate in Shoreside Vale, Starfish Island’s homes of the rich and famous or Madd Dogg’s mansion in the Vinewood Hills of Los Santos; each one is supposed to be the pinnacle of Grand Theft Auto: The Trilogy living. Let’s see just how well the other half live in all their remastered glory.

Fancy something a little slower paced? Head to Grand Theft Auto: Vice City‘s beach to soak in the sun, sea and sounds of the 80s in the all-new (well, remastered) paint work. The golden sands, palm trees and bright blue ocean stretching off into the distance can now be better appreciated, thanks to the increased draw-distances.

The pastels of the bars and clubs will be all the more lively, and the gorgeous motors racing up and down the main drag are now less polygonal and more pleasing on the eye. Wait until nightfall and the area hots up, with the neon lights of those nearby clubs bathing their hosts, attendees and passers-by in a resplendent, iridescent glow. The new lighting effects will surely supply a sheen of this to all the passing cars. It will be a thing to behold.

Once you’re done there, hit the links for a round of golf (or running people over in a golf buggy – same thing) and the lush green grass will pair beautifully with the tranquil turquoise of the waterways. ‘Fore!’, you’ll say. Wait, no, sorry. That should be ‘Phwoar!’ 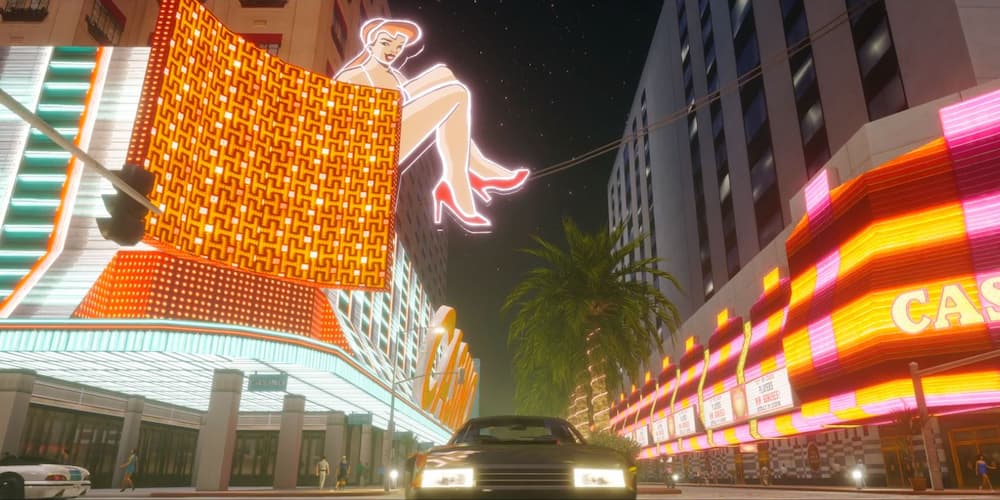 6. The Sights and Sounds of Las Venturas Strip

Similarly to Vice City’s beachfront, the Las Venturas strip in Grand Theft Auto: San Andreas is a beacon to those who seek to find a way to leave their world behind. Just a short swim across the bay (or you can wait until you can drive it) from Los Santos and you can soak in the shimmering warmth of the lights as they dance hypnotically across the bulbs above you. Beneath each light strip, an entrance way to palaces of unimaginable luxury and riches. Once cold and drab inside, surely now the casinos will be bustling, with croupiers on every table, as ready and willing to give you wealth beyond your dreams as they are to take everything you have.

For the full experience, be sure to arrive in an ostentatious auto and leave it for the valet to park for you. I mean, there isn’t a valet, but you can always pretend. Even better, just buy an apartment in one of the many hotel/casinos and you can cut out the car altogether. Better for you, better for the environment.

Found yourself back in Grand Theft Auto III‘s Liberty City and wondering what to do next? Hit up a “Toyz ‘n the hood” van and take on one of the scattered RC missions for an all-new perspective on things. Become the Toyminator and get yourself up-close and personal with Diablo Stallions, Mafia Sentinels, Yakuza Stingers and Hoods’ Rumpo XLs in each of the side-missions triggered by hopping in one of these vans.

With remastered graphics, we’re excited to cause carnage with these little guys, zipping beneath the gangsters and blowing their rides sky high before they know what hit ‘em. Your supply of RC Bandits is unlimited, too, so why not go nuts and blow up everything in sight? Cops or cabs, everyone’s fair game! If RC is a bit small-time for you, spawn a tank and go on a rampage. We want to see the explosions in their remastered goodness and what better way to do that than on a one-man army mission through a metropolitan area?! 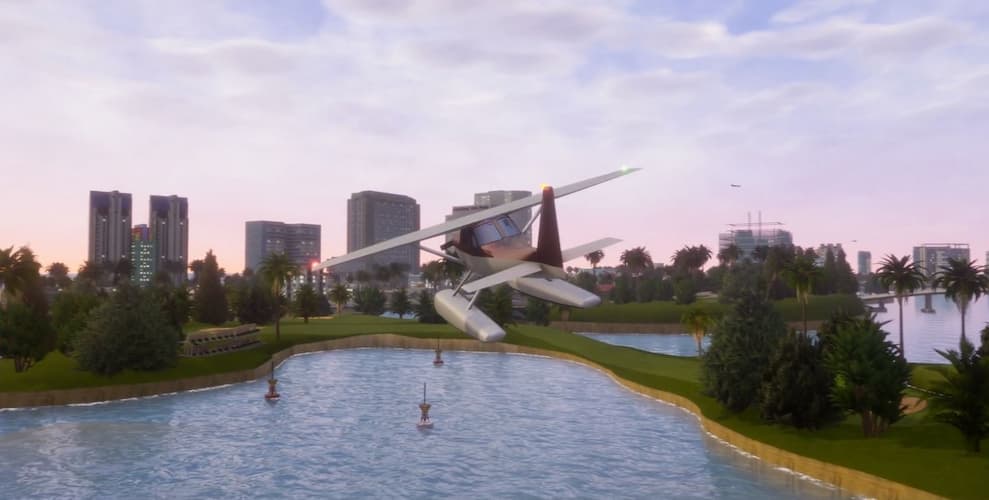 8. Heading to the Skies

Really, what we all want to do in Grand Theft Auto games (and as soon as possible at that) is to fly. Whether you’re soaring above the speedboats riding the waves around Vice City, buzzing the combines tilling the fields of Las Venturas or wobbling across the road outside of Shoreside Vale International Airport because your Dodo had its wings clipped, each one is an experience in itself.

Grab a VCPD copter from the station in Downtown Vice City for the ultimate law-breaking experience; or steal the Sea Sparrow for a bit of a safety net, letting you land on the water as easy as on the ground. This way, you can nip around Grand Theft Auto: Vice City collecting Hidden Packages as easy as pie.

Likewise, in Grand Theft Auto: San Andreas, choose a chopper to buzz about the place, collecting Horseshoes, Tags and Snapshots as you go. Whatever you choose to do with your helo, where possible, they’re sure to be the best way to see the sights. Unless you’re in Liberty City, in which case, you’re walkin’ here.