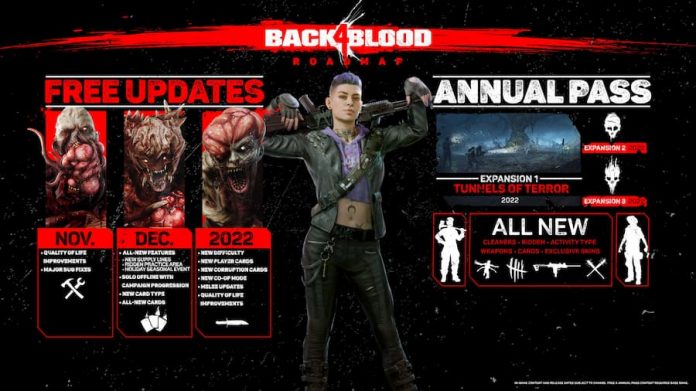 Behold Back 4 Blood’s Road 4 Map.. er, Map 4 the Future.. never mind, the important thing is we now know what’s next for the co-op zombie shooter.

As anyone who’s been following the Cyberpunk 2077 situation knows, there’s no guarantee a developer will actually hit their road map’s milestones. But, while we weren’t awestruck by Back 4 Blood, we’re reasonably confident Turtle Rock Studios will deliver; they stuck with Evolve longer than most players, anyway.

The road map reveals what Turtle Rock Studios have in store for Back 4 Blood, well into 2022. The one feature that immediately caught our eye was the offline mode, complete with campaign progression. Yes, you can play Back 4 Blood solo, but you still need to be online and progression is strictly limited. There’s no mention of a split-screen mode, unfortunately.

We’re hoping that, as part of delivering this mode, Turtle Rock will make the the AI bots a little smarter. Compared to the virtual cast of Left 4 Dead, the company’s first zombie FPS, they’re not the most reliable bunch. The offline mode is set to arrive in time for Christmas and will be free, as will most of the updates, though there’ll also be paid DLC arriving next year.

Here’s everything Turtle Rock will bring 2 Back 4 Blood (why didn’t we think of that one earlier?)

All the above updates will be free. However, if you’ve purchased the annual pass, either separately as part of the Ultimate or Digital Deluxe editions of the game you’ll also get three new expansion packs in 2022, starting with Tunnels of Terror. This will feature new maps, new ridden, new cleaners, weapons skins and more.

Cleaners, the future is lookin' bright! Here's a roadmap of what's to come for Fort Hope. #Back4Blood @back4blood pic.twitter.com/0Tp82lCcV8

It’s not clear if the new ridden will be completely new monsters or just new skins; we’re not sure Back 4 Blood needs new cleaners, however. Half the fun of Left 4 Dead was getting to know its four characters and this title already has eight.

This road map does make Back 4 Blood a more appealing prospect, though if you’re considering a purchase why not check out our review first? Or, if you’re an Xbox Game Pass subscriber, take it for a spin as it’s free on the service.

Get Xbox Game Pass at CDKeys.com