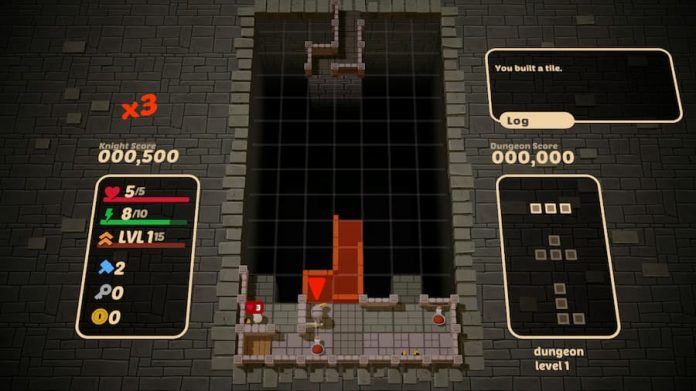 Do you like Tetris? Do you like hacking your way through dungeons? Then Blocky Dungeon is for you!

Admittedly, that sounds like a bad infomercial, but Blocky Dungeon is that simple; it’s Tetris and dungeon crawling spliced together. We can’t begin to imagine how developer SquareDev came up with the concept, since we wouldn’t dream of putting the two titles together, but it really works.

You flip between controlling your knight and dragging Tetris-block style dungeon chunks down from the screen or control them both simultaneously if you’re up for it. Your knight, thankfully, has the good sense not to leap into the void while you’re crafting the dungeon. But monsters do spawn as you slot the corridors and halls together so if you’re not on the ball, your knight will be murdered to death while you’re admiring the architecture.

Winning is a matter of completing enough dungeon lines, killing monsters or, depending on which mode you’re playing, some combination of the two. But just watching your dungeon take shape is very satisfying, particularly when you create a single gap-free corridor. It’s single-player right now but we’d love to see a two-player mode, where one player crafts the dungeon and the other hacks their way through it.

Blocky Dungeon is currently available to download from itch.io – the current early version is free but you can chip in a few pounds if you want to support its continued development and also follow the developer on Twitter. Now, if only someone would make that Silent Hill/Puyo Puyo mash-up we’ve been dreaming of..