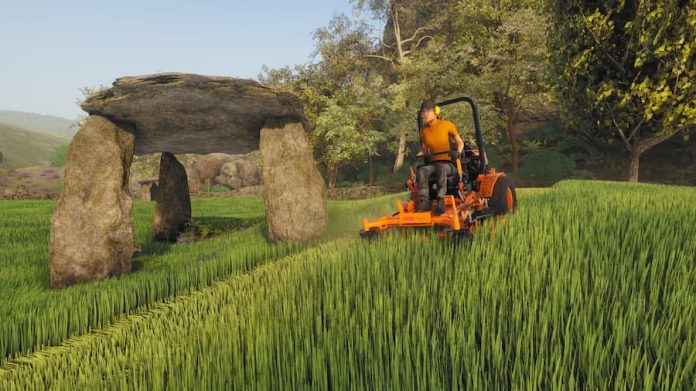 Yes, a genre that was once a throwaway gag in Your Sinclair has not only spawned an actual, serious game, but DLC that touches on ancient British history. Ancient Britain, the title given to this new chunk of paid content features four new locations to mow, The Royal Stones, Druid Tor, The Ancient Aurochs and Aurochs Hill.

We’ll save you the trouble of Googling those, they aren’t real locations but they mirror the kind of Celtic and Druidic standing stone and burial sites found around the UK. We also have to tip our hat to GamesRadar’s Ian Wilson for pointing out that Mownhenge would have been a much better name than Ancient Britain.

If you’re a PC player, you can purchase this DLC right now, via Steam. Whether it’s worth paying £6.99 for four additional sites is entirely up to you. But if you enjoyed Lawn Mower Simulator as much as we did, the prospect of mowing your way around the Great British countryside will have you reaching for your Flymo.

Even if you don’t feel like opening your wallet, you can get your hands on two new free pieces of PC-based content, which add strimmers to the game. If you don’t know what a strimmer or “string trimmer” is, it’s a handheld device that lets you edge lawns. Sure, you could use your mower but then you risk annihilating a flower-bed. And if you take your virtual gardening seriously, we’re sure you’ll want to do a professional job.

The bad news is that, while the content’s out now on PC, Ancient Britain hasn’t yet landed on Xbox. However, there’s only a week or so to wait as the content, including the strimmer update will land this December 2nd. Lawn Mower Simulator will also be joining Game Pass, so you’ll have no excuse not to hop on your mower. Let’s face it, no-one likes an untidy front garden.