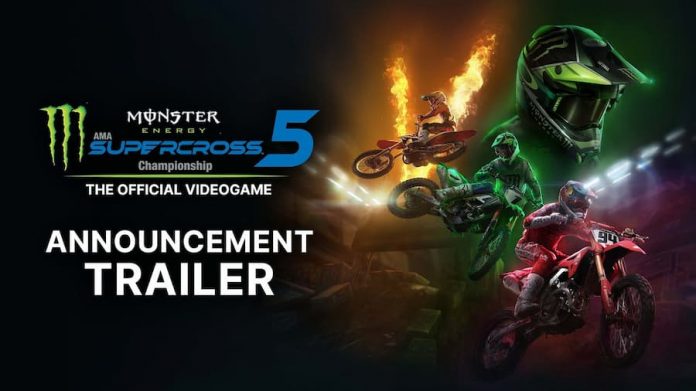 The explanation for this extended moniker is that this isn’t just some game Monster Energy have slapped their name or otherwise infiltrated, like Mad Max or Death Stranding. Instead, the company sponsors the race series and the game is, in turn, based on that. The question is, will it be any good?

We’re on the fence, since we weren’t particularly impressed by last year’s entry in the series. But there Monster Energy Supercross The Official Video Game 5 does promise a couple of intriguing changes. First of all, the track editor will now let you mash smaller track pieces together to create single, more complex modules.

This might not sound like much, but it means it’ll be even easier for us to create horrifying, near-impassable hellscape tracks that will give riders nightmares and/or horrifying physical injuries. Speaking of horrifying injuries, the “Rider Shape System” means that injuries incurred in career mode will have a longer-term effect. Muahahahaa! Sorry.

We’re hoping that, this year, developers Milestone and publishers Koch Media can deliver a game that’s worthy of the Monster Energy Supercross The Official Video Game 5 name. We’ll have to wait till March 17th 2022 to find out which is when it rides onto PlayStation 5, PlayStation 4, Xbox Series X|S, Xbox One and PC via Steam.