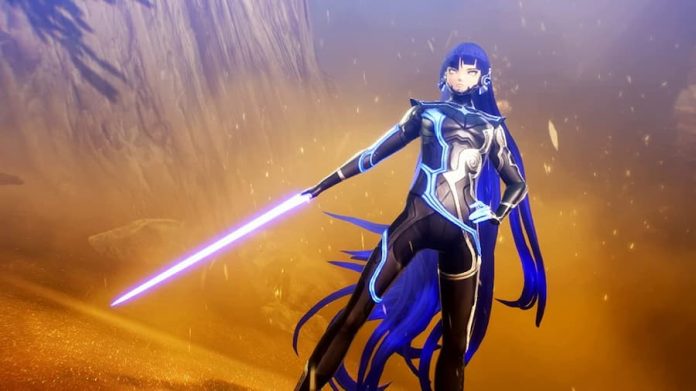 It’s perhaps not all that surprising that the Shin Megami Tensei series has remained so niche, while the Persona games spun off from it have broken into the mainstream.

Typically light on storytelling, the series is also comparably dark, with post apocalyptic settings and elements of occultism. Further ramping up the eeriness factor, you’re adventuring pretty much alone, aside from a bunch of demons that you recruit. It’s essentially a demonic version of Pokémon. Shin Megami Tensei V doesn’t break this mould.

After naming your character, the story starts in a high school in Tokyo. There are rumours abound of students being murdered by demons, and so caution is advised when travelling to and from school. When one of your friends wanders off, however, you find yourself following them into a tunnel. It’s there that disaster strikes; an earthquake suddenly causes the tunnel to collapse, and you awake to find yourself somewhere that looks ruined and otherworldly, yet also vaguely familiar.

Much of Shin Megami Tensei V takes place in Da’At, a post-apocalyptic version of Tokyo. Inhabited by a plethora of demons, it’s thanks to the assistance of a being called Aogami that our character has any chance of survival. You see, by fusing together and becoming the Nahobino, they become powerful enough to at least stand up against the demons they encounter. And with a little persuasion, many of them can be brought over to your side, assisting you on your quest to save humanity.

Rather than tight, labyrinthine dungeons, Shin Megami Tensei V typically finds the player exploring large, open areas. Da’At is a sandy place, largely devoid of water and plant life and filled with ruined buildings and other signs of the fallen human race. It’s an absolute pleasure to explore though, with a surprising amount of verticality. The Nahobino can freely run and jump, and even climb certain ledges – their long blue hair majestically flowing as they move with grace. 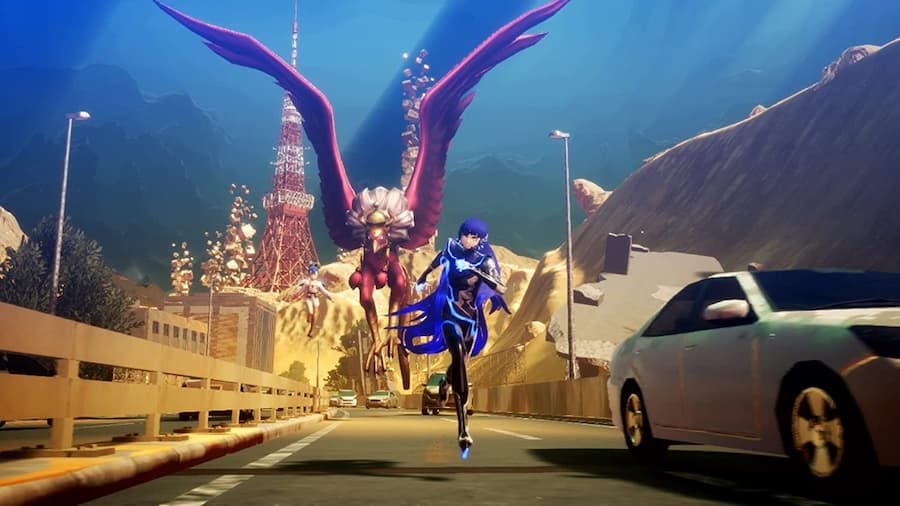 Going off the beaten path always proves to be rewarding, but an abundance of demons makes every step unpredictable and dangerous. Enemies are viewable in the world, and by slashing at them with your sword you can gain the advantage when starting battle. It pays to stay on your guard, then, but it’s pretty easy to avoid confrontation for the most part if you just want to move from A to B and explore.

Avoiding combat won’t do you any good in Shin Megami Tensei V, however. Even more so than usual. You see, aside from victory earning you valuable experience that’s required to level up, entering combat is also the primary way to recruit new demons for your monstrous posse. Alongside the usual commands such as using a skill and guarding, the Nahobino also has the option to open a dialogue with an enemy. What ensues is often an awkward conversion where the Nahobino first has to win over the enemy, and then negotiate with them to finally gain their allegiance.

There are hundreds of demons to recruit, and each one has their own strengths and weaknesses. To succeed, you’re going to want to have the best demons fighting by your side. And that where much of the fun of Shin Megami Tensei V lies; creating your ultimate party. As demons level up they gain new skills, and you can fuse demons together to create new ones while transferring some of those skills over. Hours can be spent, acquiring demons, adding them to the compendium and then experimenting with fusion to see what you can. It’s very addictive. 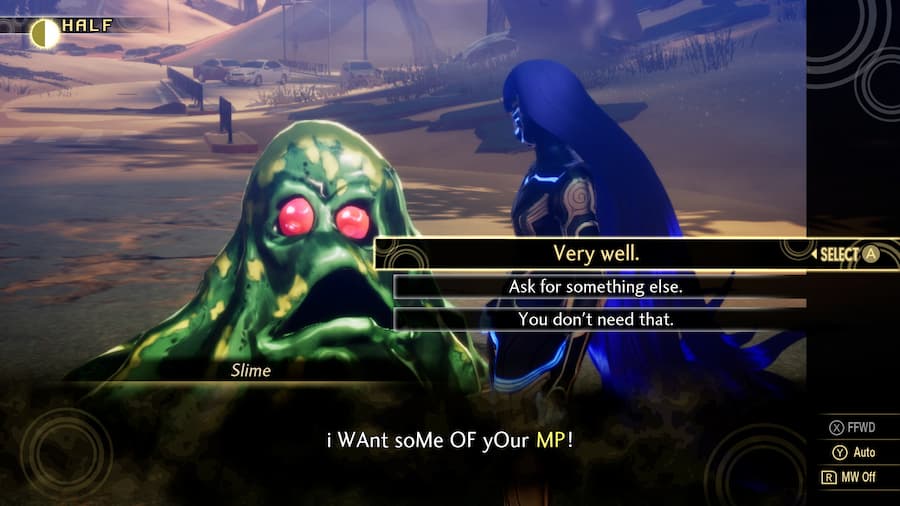 The Nahobino, too, can be enhanced beyond just levelling them up and distributing stat points. Using essences, they can be granted new skills and affinities, allowing you to fine-tune their capabilities. Meanwhile, using a resource called Glory, Miracles can be acquired to further enhance their abilities, unlock additional skill slots, create more space for demons in the party, and a whole lot more. The focus in Shin Megami Tensei V is on you building your party rather than watching one story scene after another. It’s refreshing.

Be warned though: this is a game that takes no prisoners. On normal difficulty Shin Megami Tensei V can be very punishing. Bosses can require serious planning to overcome, and sometimes plenty of grinding. Featuring an action point system, in combat you’re rewarded for exploiting enemy weaknesses, allowing you to perform more actions. Use the wrong skills or get blind-sided by a group of enemies, and things can quickly go wrong. There are multiple difficulty settings though, so you can tweak the experience more to your liking. A free ‘Safety Difficulty’ DLC is also available, which makes combat trivial. 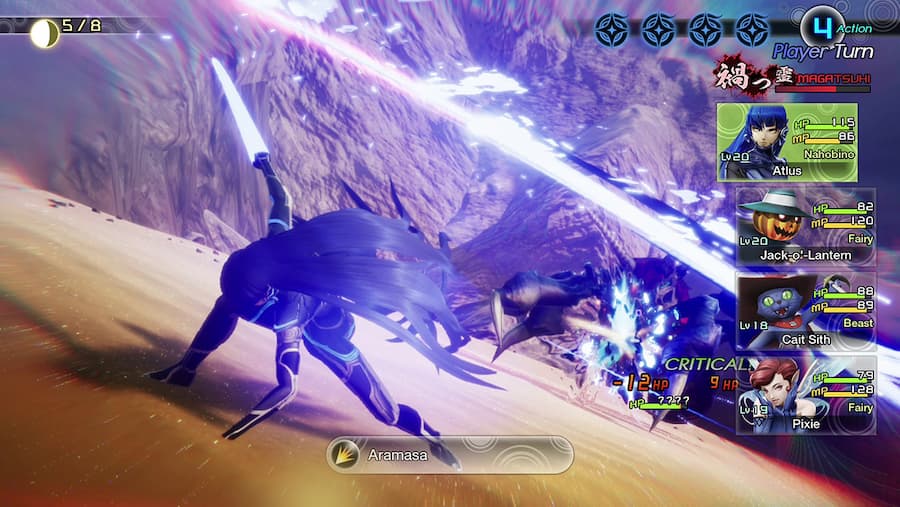 With its large environments and striking visuals, it should perhaps come as no surprise that performance in Shin Megami Tensei V isn’t silky smooth. It’s at its worst when docked, but it’s still very playable. Handheld players are going the get the most out of the game, especially if they have a new OLED Switch. The bold colours really pop out of the screen, and the framerate is much more buoyant.

It’s been a while since I’ve played a JRPG quite as captivating as Shin Megami Tensei V. Its dangerous world is a pleasure to explore, and recruiting a small army of demons is shockingly addictive. Some may be disappointed by the lack of story scenes, but I enjoyed the fact that it just lets you get on with developing your party without any fluff; the focus here is on the journey. If you’re a Shin Megami Tensei fan or into RPGs that favour gameplay over storytelling, consider this a must-have.

A code was provided by the publisher to facilitate this review of Shin Megami Tensei V. It’s available exclusively on Nintendo Switch.