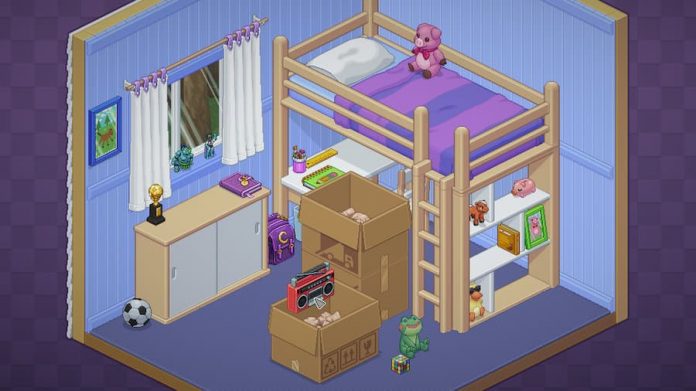 Surely the idea of moving into a new house, forced with the arduous task of unpacking never-ending piles of boxes, fills anyone with dread.

And so a game where you do nothing but unpack boxes should be quite a hard sell. On the contrary, Unpacking from Witch Beam and Humble Games is exactly that, yet it’s a joyous, meditative experience that I simply can’t get enough of.

Starting with the room of a young child, you’ll follow one person move several times over the course of two decades; from university dorms to house shares to their own place. Each time, the number of possessions they own grows, and the amount of space you have to organise in grows too (well, most of the time).

Clicking on a box will reveal an item, which you’ll be then tasked with finding a home for. Sometimes it’s obvious; books go on the shelf, underwear goes in a drawer. Other items, such as stuffed toys or obscure trinkets, might require a bit more thought. Does a stuffed pig belong on the bed of a university student, or should it be stored away somewhere a little more inconspicuous?

For some items, there’s no right or wrong; simply putting them in a logical place is enough to appease Unpacking. Other items must go somewhere specific, however. When you have a whole family home to move around in, it can be a bit annoying. If I want to store board games in my office, I should be able to. But no, Unpacking forces you to have them in a downstairs space. 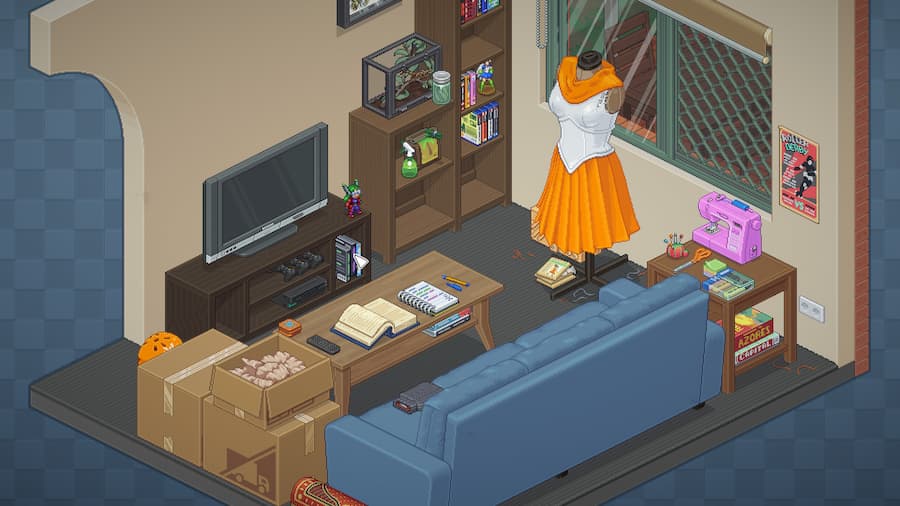 While you may question why a pair of shoes have been thrown haphazardly into two different boxes, one amongst pots and pans, there’s a thrill in Unpacking of not knowing what you’re going to pull out of a box next. You might think you’re done with the bedroom boxes, having made perfect use of all shelves in that room already. But a box in the kitchen may reveal a key item you need to make space for. Back to rearranging everything to make room for something new.

There’s a fantastic attention to detail here for a game made up of pixel art. DVDs, despite being tiny, are recognisable by their cover; film buffs will have fun trying to work out what they are (I spotted at least Ghost World and Donnie Darko). You’ll also spot a GameCube, a Wii and a DS, and matching game cases to go with them. Witch Beam’s artists are clearly big Nintendo fans.

Unpacking isn’t just a game about finding a home for someone’s belongings, though. Each move tells a story, and through witnessing each big life change, you’ll get an understanding of who the person is. From moving to a university dorm to a house share, you’ll start to see some inklings of a career taking shape. You’ll also learn about love interests and family changes in later moves – both happy and sad. There are some really poignant touches here, like unpacking a photograph of an ex. You’ll probably not know what it is, other than a happy photo with friends, so you’ll put it on the noticeboard, along with several others. But you’ll be warned that its placement is wrong – it actually belongs in a cupboard, where you don’t have to look at it every day. 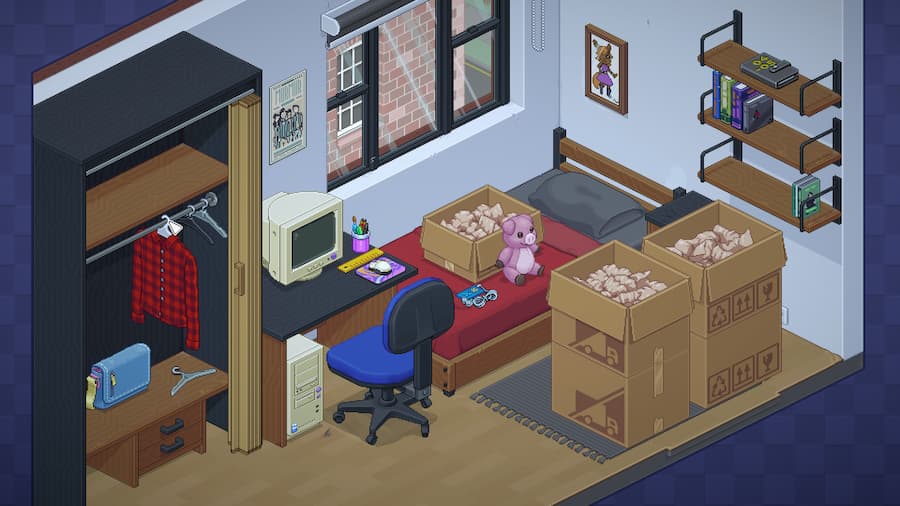 We’ve all moved several times in our lives, presumably, and likely for a variety of reasons. For me, several of the moves in Unpacking aligned with my own life. The game’s first move in 1997 sees you unpack a youngster’s room, labelled “finally my own room!”. 1997 was the year I first moved too, to a new house at the age of nine with my parents. My next move after that, the same as the protagonist of Unpacking, was to my university dorm. (Though having rocked up in a Transit van rented by my parents, I had a lot more boxes to unpack.)

Without words, and without ever seeing the characters whose stories it tells, Unpacking manages to be deeply meaningful and moving in the narrative it portrays. It tells stories many of us can relate to, and it’ll undoubtedly bring about our own memories, both happy and sad, of moves and changes in our lives.

But even on a more shallow level, there’s something incredibly relaxing and meditative about organising a home, finding the right place for everything to live. For me, it was over far too soon, and I hope Unpacking gets more content. Or a sequel. Rarely does such a simple concept have such an impact, but Witch Beam has absolutely nailed it.