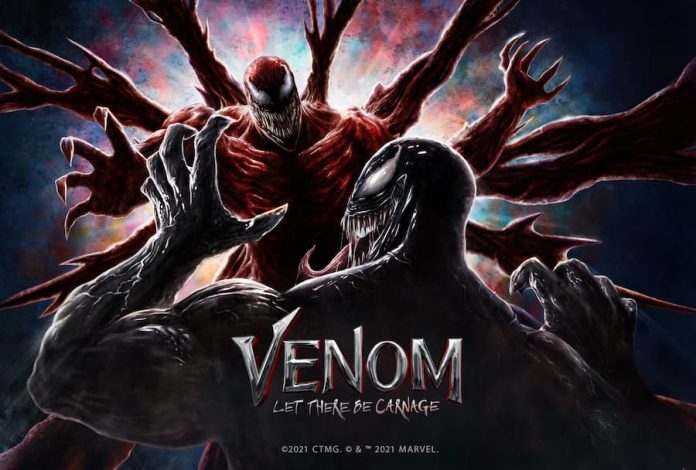 Being isolated and somewhat vengeful characters, Eddie Brock and Venom don’t typically lend themselves to a standalone movie.

This drew plenty of hesitance around the first film’s release, but Venom (2018) made a good fist of it, drawing mostly negative reviews from critics, but a far friendlier reception from the public. Venom: Let There Be Carnage, however, is likely to please everyone a little more, with a simpler plot, fewer characters and a more traditional story to tell. The buddy-comedy humour is sufficiently different from most other comic book movies – except perhaps Marvel’s Guardians movies – and Venom is a surprisingly deep character whose surface has just been scratched.  It was a welcome feeling, then, to spend some more time with him.

Initially, we find Tom Hardy’s Eddie Brock still living in his run-down apartment, what feels like a year or so after the first film ended. He seems to have accepted sharing his life with Venom a little; now there are several large holes in the ceiling, a tyre swing and a pair of pet chickens who sit higher in Venom’s pecking order than Brock himself. This leads into a thematic riff on the ‘odd couple’ sitcom setup; we see the more mundane side of life on Earth and the difficulty that can lead to in sustaining a space-faring symbiote on a diet of Tater tots, chickens and chocolate rather than, you know, human brains.

There’s plenty to enjoy in these early minutes, with some absurd moments of ‘extraordinary characters in ordinary situations’. It’s good value, too, adding to the relationship/symbiosis between Brock and Venom, but things do then devolve into something reminiscent of Iron Man 2, when Stark has a little too much to drink and falls out with Rhodie.

Things take a turn when we’re properly introduced to serial killer Cletus Kasady (played excellently by Woody Harrelson) and a short time later, to his symbiote, Carnage – Venom’s own offspring. Kasady is set up well as a deeply disturbed villain, with a tangible connection to Brock, but he only really hits that one note throughout; his motivations remain simple and he never develops any sort of meaningful character arc. Fortunately, Harrelson seems to enjoy playing the character, which keeps him interesting enough, but it would have been good to spend a little more time with the two of them, characterising them and seeing how they got along, given how long it took Brock and Venom to establish any kind of working relationship. 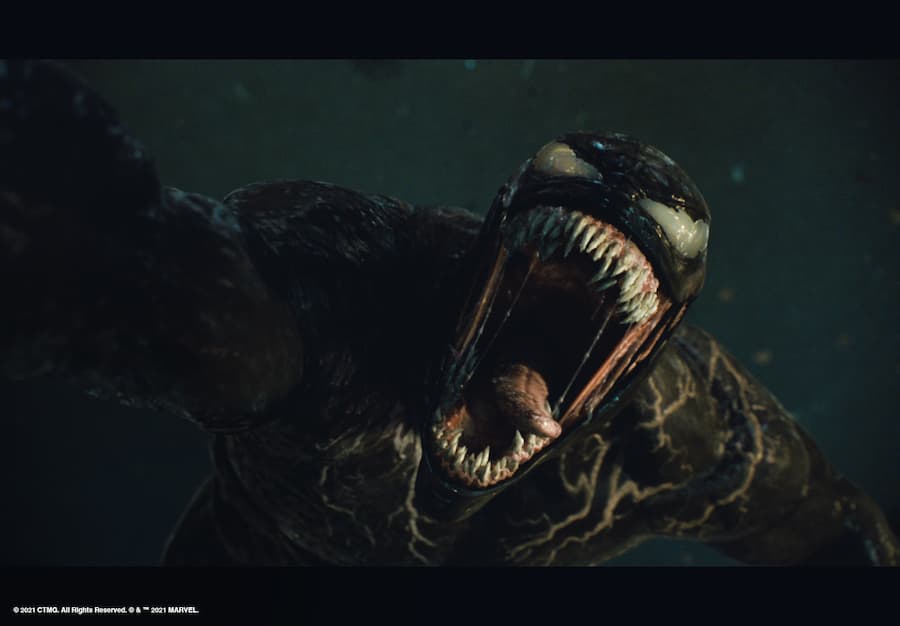 The early moments also set up the other notable characters; Detective Mulligan (Stephen Graham) and Shriek (Naomie Harris), both of whom may go on to play larger roles in the future. For now though, Mulligan is kept interesting and believable in the wider world but the same can’t be said for Shriek, the long-standing Spider-Man villain and foil to Venom. Harris’ performance felt underwhelming, with Shriek not adding much to the plot and  feeling somewhat disposable. It’s a thread left unpulled, but without a radical change, I won’t be pulling at it, unlike that of Mulligan.

The film then takes some time to show the differences between Venom and Brock, who kill and cause chaos because they must, and Carnage and Kasady, who do so because they can. This does something of a disservice to Carnage, who’s shown as a mindless beast rather than the super-intelligent being that symbiotes have been shown to be in this universe already. 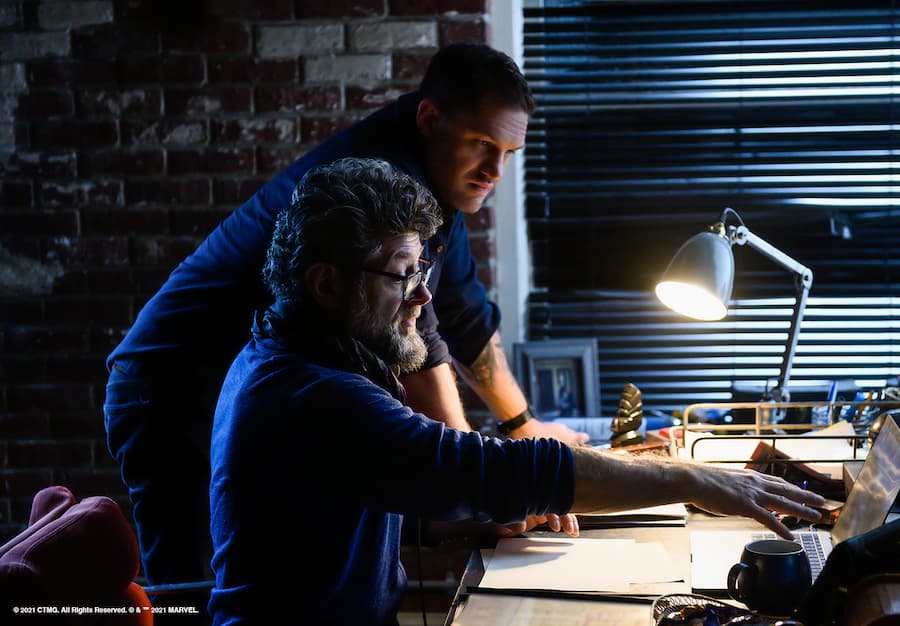 Much as they always have been in both the comics and other media, the differences between the two pairs are shown best in their subtle differences. Carnage is stronger than Venom (and likewise their human counterparts), but in case you miss these clues, it’s spelled out much less subtly later on. About as subtle as the glaring product placement around the start of the second act…

The character design of Venom remains pretty on-point throughout Venom: Let There Be Carnage. His domineering stature and sturdy movement leave a lasting impression. Carnage’s design is less typical; he comes across as a taller, less stocky, red version of Venom rather than his more traditional, twisted and wiry, unsettling self. He could have done with jumping up a couple of shades of red, too, with conflict between Venom and Carnage being lost in the darkness at some points – a lesson you may have expected they’d learn from the first movie. On the whole, however, Carnage is an exciting villain to have on screen and this debut has been a long time coming.

Much like the first film, Venom: Let There Be Carnage does suffer from some bizarre pacing issues. The first half takes some time to get going, considering there’s very little standing in the way of Kasady and Carnage’s goals. This may have been to show off their power but it comes off more as them being lucky and presumably catching every green light. Once their goals are realised, the film then suddenly wraps up without too much in the way of consequence, other than a few brief lines of dialogue and a mid-credits scene.

(Speaking of which, for Venom fans, that mid-credits scene is one worth staying for. It may not make complete sense just yet, but it most likely will within 6 to 8 months…) 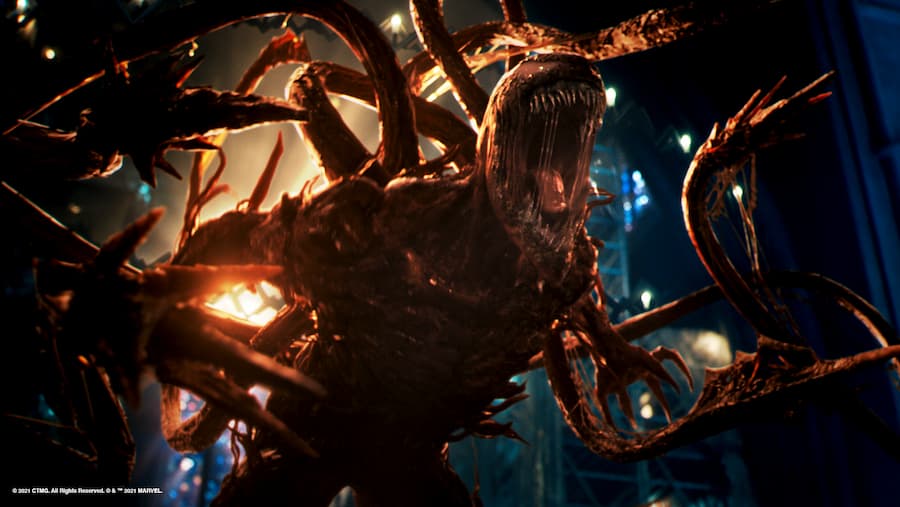 Its uncommonly short runtime of around 90 minutes made a nice change from the norm for Marvel’s recent output, which are rarely under two hours (the upcoming Eternals runs at 2hrs 37mins – a full hour longer than Venom: Let There Be Carnage). Such brevity is reminiscent of earlier modern day superhero movies – and there’s something to be said for their simplicity.

Overall, Venom: Let There Be Carnage is an enjoyable blend of action and comedy, leaning less on social commentary than the first film and letting its characters – Venom especially – shine a little brighter. There’s not a lot of complicated world (or universe) building to follow either, with a basic, self-contained story which seemingly has little effect on anyone other than the main characters.