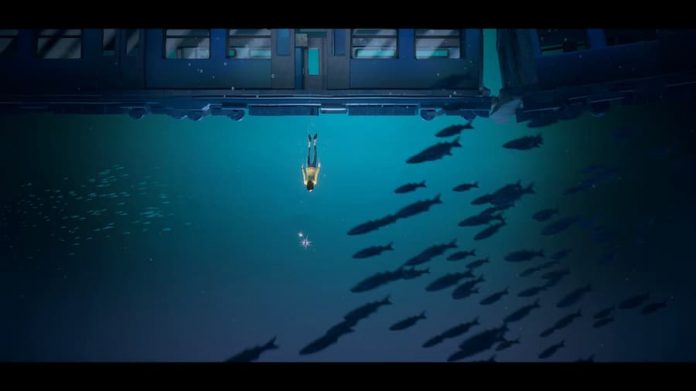 A Memoir Blue, a moody, aesthetic-blending game that explores the relationship between mother and daughter, now has a February 2022 release date.

We first got wind of Cloisters Interactive’s upcoming title during publisher Annapurna Interactive’s July showcase. Like a lot of games that tackle relationships, other than the relationship between a shotgun and a demon’s face, A Memoir Blue isn’t all kittens and hugging. Instead, it focuses on the things that drove a wedge between the pair.

This emotional exploration seems to take place through the medium of memories and, given that your character is a professional swimmer, you literally dive into memories. When you’ve got the main character diving from a train into a vast ocean you know its reality is a little fluid. In fact, Annapurna dub it an “interactive poem” so it’s entirely possible your main character is reflecting on things that, by now, are too late to change.

The art style, in particular, is something to think about. Your character is depicted as a 3D model while your past self is hand-drawn art. Yes, it’s a cool effect, but it’s also a neat way to illustrate the chasm of time that lies between your protagonist Miriam and her past self.

In short, we expect A Memoir Blue to have us blubbing or, at least, bring a lump to our throats. Though hoping the experience won’t be marred by our own memories of Another World’s terrifying underwater opening and will have a low alien-octopi count.

A Memoir Blue is set to hit the Xbox Series X|S, Xbox One (also through Xbox Game pass), PlayStation 5, PlayStation 4, Nintendo Switch, and PC this coming February 10th 2022. In the meantime you can check out the above trailer or wishlist it on Steam.