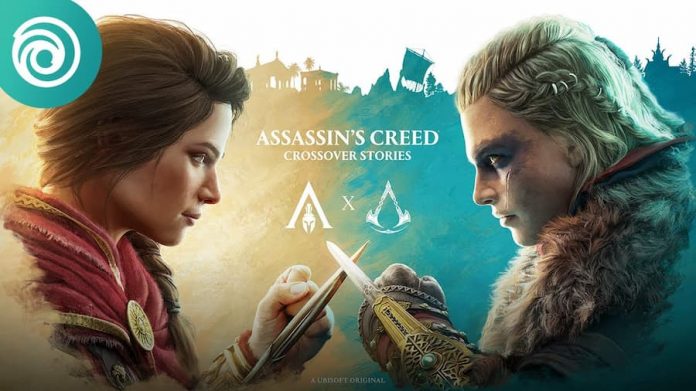 Asssasin’s Creed’s Crossover Stories DLC, out today, sees the protagonists of the last two games come meet up. And even better, it’s free.

The trailer for the content shows a female Eivor meeting up with Kassandra – does this mean female Eivor is canon? Possibly, though we know that Kassandra was always meant to be the protagonist of Assassin’s Creed Odyssey, and that Alexios was just added as an afterthought.

But the the important thing is that these two badasses are coming together.  But there is one snag, and that’s that Assassin’s Creed Odyssey and Assassin’s Creed Valhalla take place around 1000 years apart. That has us a little worried because, in case you couldn’t tell, we’re excited for this crossover. We know the Assassin’s Creed games are simulations within a game but we’d be disappointed if this meeting turns out to be a “What If?” scenario.

“What happens when two Assassin’s Creed heroes meet?” reads Crossover’s blurb? Murder, fighting, smooching and more murder, we’d expect. However to fully experience this meeting of minds – and swords – in full, you’ll need Assassin’s Creed Odyssey and Assassin’s Creed Valhalla. Why? Because the content is split into two chapters.

Those Who Are Treasured takes place in Odyssey and will require players to have reached Megaris, though Ubisoft warns that if you’ve not completed the whole game you may run into spoilers. A Fated Encounter, on the other hand, is accessed through Valhalla and, players need have to have reached Settlement Level 4 and completed the quest “A Wise Friend”.

Assassin’s Creed Crossover Stories is out today, across all platforms, and could be just the excuse you need to Sparta-kick some more ne’er-do-wells off a cliff.