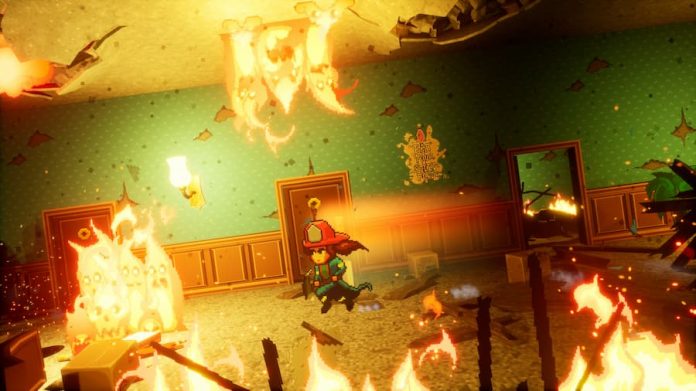 Perhaps that’s on purpose. I’ve never been a firefighter myself but I’m pretty sure it’s up there with some of the toughest jobs on the planet. But the challenges you face in Firegirl don’t exactly align with what your typical firefighter might come up against. The smoke-filled buildings, crumbling around you, aren’t much of a threat, for example. You aren’t going to succumb from smoke inhalation. And as long as you have your wits about you, most individual fires shouldn’t be too troublesome, either. Well, except maybe the odd fireball that catches you off-guard. What is your biggest enemy is the timer, and your woeful boosted jump ability.

Firegirl: Hack ‘n Splash Rescue plays out on a 2D plane, so even though the 3D environment you find yourself in might have an in-tact staircase right behind you, you can’t use it. Oh no; the only way you can move between floors is by finding a gap and boost-jumping yourself through it. By jumping and activating your hose, you’ll propel yourself upwards. Or at least, that’s the idea. Sometimes it works wonderfully, propelling your Firegirl through the air, landing on the above platform with no problem. Other times she’ll get nowhere near where she needs to be. Nailing the timing and momentum is key, and it’s easier said than done.

Chances are, too, you’ll run out of water while trying to move between platforms, often leaving you stuck with nowhere to go. Passing through most doors sees them be taken over with flames too large for you to tackle, so you can only keep moving forward. But if you’ve got no water and need to travel upwards, you’re probably going to perish right where you’re stood. It’s tough being a Firegirl. Even when you don’t get stuck with no water, you’ll need to pay close attention to the clock; you’ve only got a few minutes, and often there’s an exit nowhere to be seen when you need one most. 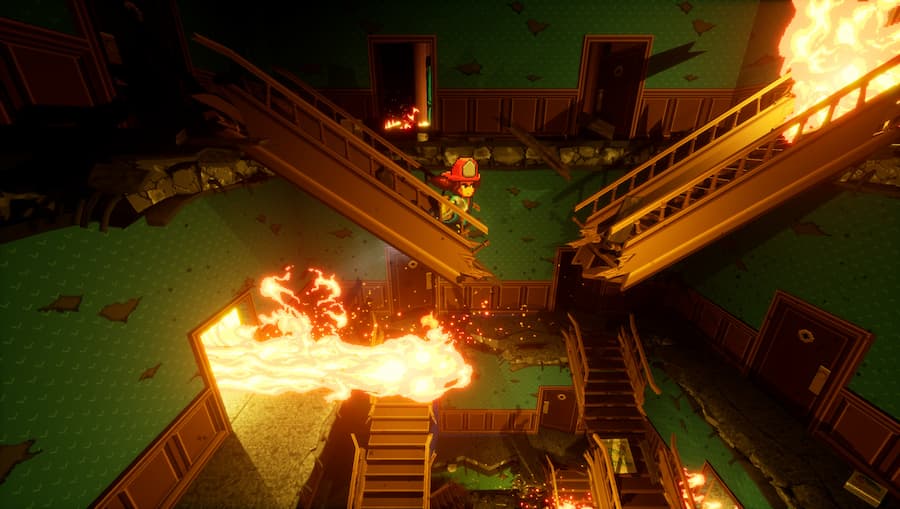 When the flow’s going well, though, Firegirl can be exhilarating. You don’t know what’s going to be waiting for you behind any door; axe your way through and you might be met with a wall of fire enemies, or maybe there’ll be someone waiting to be rescued. That’s the ultimate goal you see: save all the people trapped in a burning building (and any cats you find along the way), then get out yourself. Battling fires, avoiding flames, and running through burning corridors is a thrill. It helps that Firegirl has a rather eye-catching art style that puts 2D sprites in front of a 3D backdrop. It’s a really nice game to look at.

You’ll earn money as you play through Firegirl: Hack ‘n Splash Rescue. Thankfully, even if you fail you’ll get a token reward, which can be used to upgrade your gear. Health, equipment and hose upgrades are available, providing you with better resistance, the power to hold more water, and the power to propel yourself further. That last one is particularly handy given the issues we’ve encountered with the boost jump mechanic, but it still doesn’t alleviate the issues altogether. 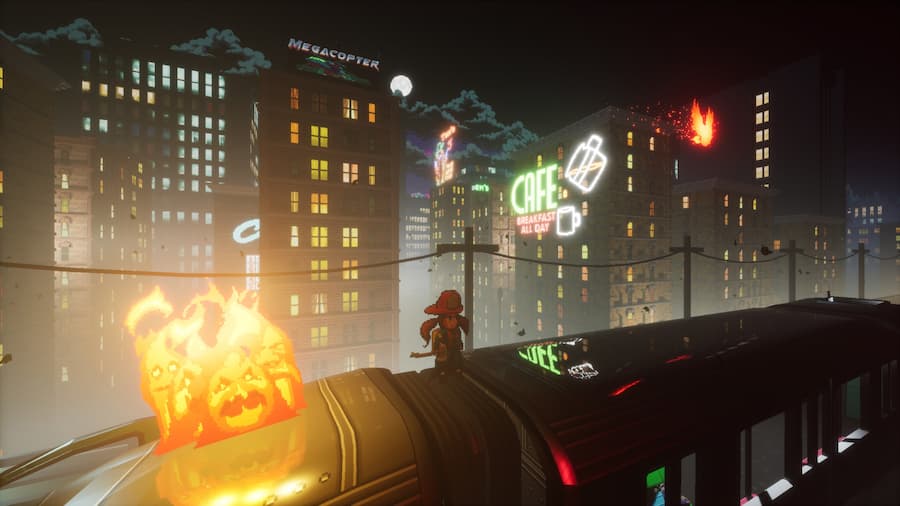 There’s a lot to like about Firegirl, but it’s not free of issues. You’ll undoubtedly grin with glee whenever you’re lucky enough to successfully complete a run, having rescued all survivors. But chances are you’ll come across insurmountable frustrations more often than not, bringing your time with the game to a grinding halt. Continually upgrading Firegirl‘s abilities certainly helps, but the mechanics need a bit of tweaking before this is as enjoyable as it deserves to be.

This review of Firegirl was facilitated by a code provided by the publisher. It’s available on PC. 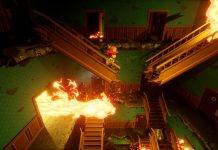 Firegirl is an Action Platformer All About Putting Out Fires