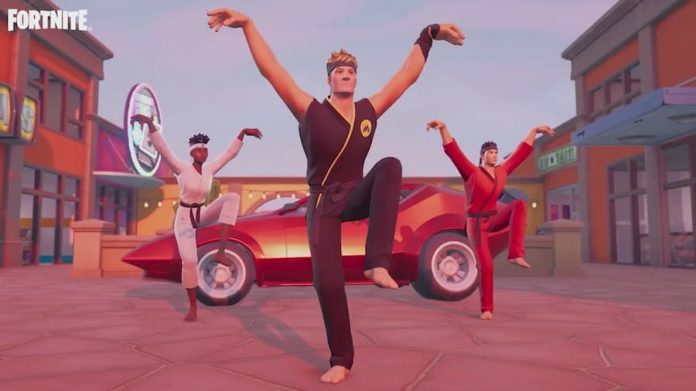 That’s the good news. The bad news is that, even though they’ve been released to promote Netflix’s show, you’re still going to have to pay actual V-Bucks to wear them. Still, if you’re a Cobra Kai fan, you’ll get a kick out of them.

There are ten costumes in total, five for female characters and five for male characters. Between the costumes you can dress up as a member of Cobra Kai, Eagle Fang or Miyagi-Do. Unlike, say Rick or Morty or Superman, you can’t become the actual characters from the series, just wear a copy of the show’s karate gear.

Cobra Kai is slightly tongue-in-cheek a follow-up to The Karate Kid, which sees Johnny Lawrence, antagonist of the first film, redeeming himself as a karate sensei, though there are a few speed bumps. Daniel LaRusso, the “hero” of the first movie is shown to be carrying a grudge and the two inevitably come to loggerheads.

The show has plenty of twists and turns and is well worth diving into if you’ve not seen it. It began life as a YouTube Red series but was bought out by Netflix which is where the show now lives.

Cobra Kai: Season 4 is out today, and the costumes are available in Fortnite right now. Aside from the costumes you can also get your hands on some weapons, “back bling” and a crane kick emote. You can find the full details of what’s on offer here.