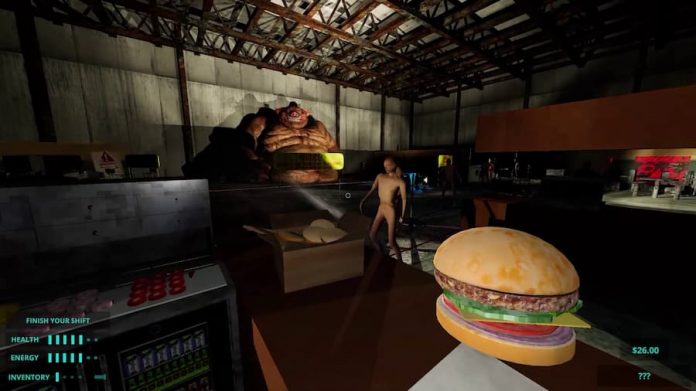 Happy’s Humble Burger Farm, like Five Nights at Freddy’s before it, proves that mascots are just the worst.

What makes Happy’s Humble Burger Farm more fun to play, however, is that you know the nightmare’s on the way. Yes, you might fall to pieces because fear got the better of you, making it tougher to execute the burger-flipping, shake-making job you’re tasked with. Stay calm and you might be okay, but freak out and you’re cow food, as reality warps and Happy herself comes to say hello.

However, even before you the hit the restaurant, Happy’s Humble Burger Farm will have you on edge. You actually have the freedom to explore, and there’s a couple of other locations you can visit later on, but just roaming and see how subtly ‘off’ the world is will give you the shivers. Happy’s sits there, like a spider in the middle of a web, and you know that, sooner or later, you’re going to have to step through those doors.

Making fast food is, theoretically, an easy task. The trick is, when you’re not quaking in terror, is becoming as efficient at it as possible. Yes, I just typed that sentence and I’m balking at the fact that I was playing a game trying to be the best employee I can, but Happy’s Humble Burger Farm is surprisingly satisfying (and tricky) with it.

For example, you might start grabbing everything you think people might order and slapping it down on a counter, health regulations be damned. Things could be going well, then the restaurant’s Roomba hops up on the counter and starts sucking up the ingredients. Then, things pick up and you’re spinning plates which, eventually, have even smaller plates spinning on top of them.

Ultimately, Happy’s Humble Burger Farm is a test of how much you can keep in your brain, and how calm you can stay with murderous mascots watching over you. My one beef with the game is that it turns the mascots into monsters, because with the Weeping Angel-style ability to move only when you’re not looking, they’re terrifying enough in their “normal” forms. Still, given the boss fights that figure into the game, I can understand why you’d want them to bulk up.

Happy’s Humble Burger Farm is a deliciously warped take on customer service; a cursed cooking simulator that risks keeping you awake at night. It’s as much fast food fun you can have without going to McDonald’s and staring down people who shout at staff.