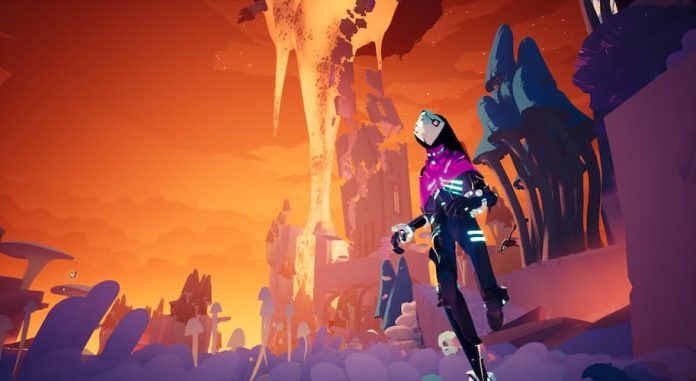 There’s a lot more to Solar Ash than simply gliding and grinding around its luscious world, but by god is it good fun.

The first thing you’ll be told when starting a new game is that by holding down a trigger, you can glide over the environment rather than simply walk. Gliding is fast, smooth and satisfying; you’ll never traverse without it – not unless you need to. Vast distances are covered in no time, and by gliding and then jumping, you can travel even further, reaching platforms that would be otherwise slightly too high or too far away.

A little later into the game, you’ll meet a grinding rail. Holding down the same trigger button lets you grind along it, blustering through the air like a super-speed Tony Hawk. There’s nothing quite so gratifying as gliding, jumping and grinding in sequence, nailing each landing perfectly as you move through Solar Ash‘s intriguing and mystifying world. Sometimes you’ll mess up during a tricky section; it’s inevitable. But it’s fine – there’s no fall damage here, so you’ll simply get up and try again. It’s not a game that revels in punishing you – you’ll regularly unlock shortcuts so if you fall a long way, not all is lost.

This momentum-based and quick-paced traversal is what you’ll use to face off against Solar Ash‘s ‘bosses’; great beasts known as Anomalies that reside in each area of the game’s world. You’ll have to weaken them first by finding their vulnerabilities within the environment; an anomalous black goo which hurts you if you make contact with it for too long. But find the few instances around the environment and you’ll be able to remove it by attacking highlighted points of it. Sometimes it’s straightforward, but often figuring out how to destroy it – or even get to it in the first place – is something of a puzzle. 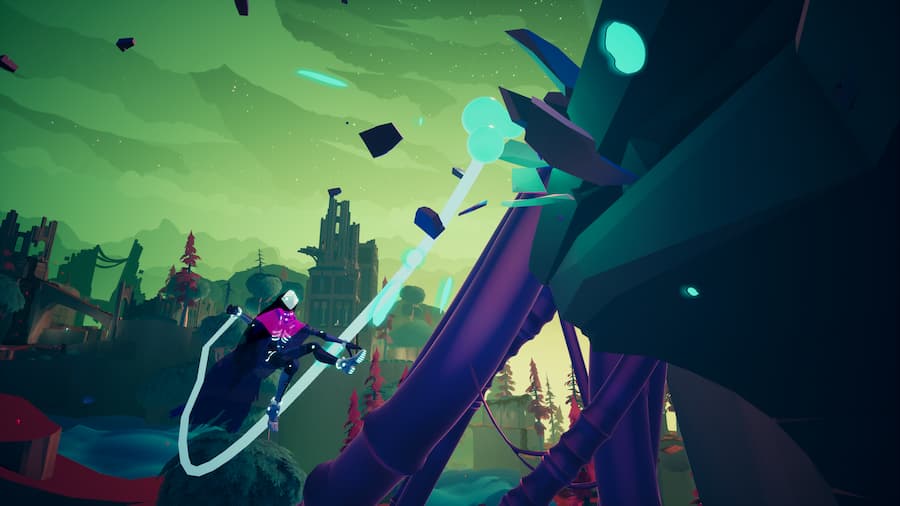 Once you’ve cleared an area, the boss will appear, ready for you to take it down. You’ll need to glide, jump and grind to catch up with it, and once you’re in range you’ll be able to climb up onto its back. Up there, you’ll need to quickly move from weak spot to weak spot, attacking in quick succession. Timing is key; if you’re not quick enough you’ll get hurt and flung to the ground, forced to try the whole thing again. It can be tricky, and you’ll need to complete the sequence three times in all, each one a little harder than the last. Speed and precision is key; stop moving or lose momentum and you’ll likely fail. But when you do succeed? It feels wonderful.

Yes, there is more to Solar Ash than simply speeding around its environment. There’s a narrative for one, giving purpose to everything you do. In all honesty I didn’t really care for it; it’s pleasantly told with excellent voice acting throughout. But other than giving me a reason to move from one area to the next I found it hard to get invested in. Your mileage will differ, of course. But ultimately it doesn’t matter; a game like Solar Ash doesn’t live or die on its narrative alone. 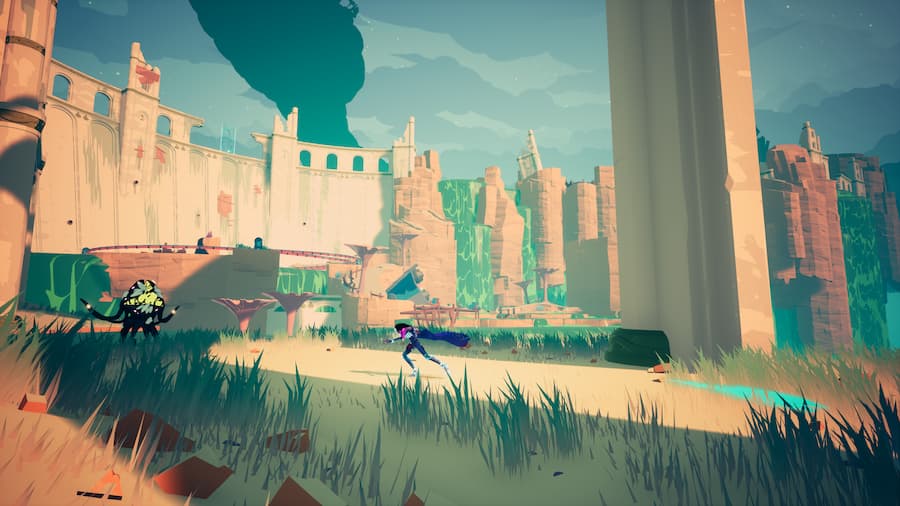 Its world design is certainly worth a mention. This is a gorgeous game. Playing on PS5, it may not quite push the boundaries of the new console, but its unique art style doesn’t rely on realistic visuals or fancy technology. It’s vivid, it’s colourful, it’s a world that begs to be poked around in. And you can. There are physical boundaries that stop you moving too far, but each location you find yourself is in plenty big enough to simply wander around and gawp at. You’ll need to, as well, in order to find where you need to go next. Waypoints will highlight the location of each Anomaly weak point you need to destroy – and indeed the boss itself when it rears its head – but sometimes a waypoint can only get you so far. You’ll occasionally need to do a bit of legwork to figure out the route you need to take.

Perhaps that will be where most of Solar Ash‘s frustrations lie for some players; it can be hard to figure out where to go at times. One level requires you to activate three switches to open a door – but your waypoints won’t tell you where the switches are. Of course, it’s helped by the fact that traversal remains enjoyable throughout, but aimless wandering can still get arduous after some time.

This isn’t the longest game in the world; in fact, there’s an achievement for completing Solar Ash in under three hours. You’d have to know the game inside-out for that, though; most players need at least double, or even triple, that amount of time to take everything in. Despite the speed at which you move around the environment, it’s not a game you need to rush through (unless you’re trying to unlock that particular achievement, of course). Players who take their time to soak in the game’s mystical atmosphere will surely get the most out of this. 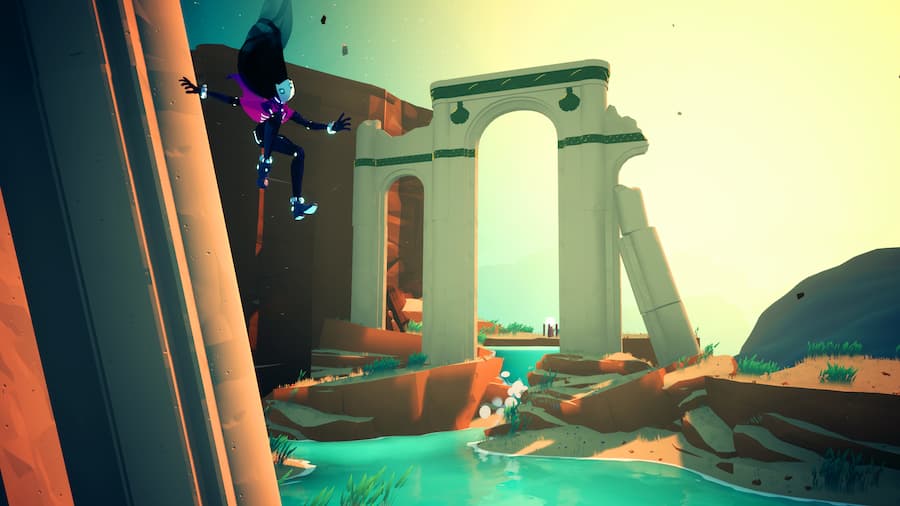 Although I didn’t care much for its story, Solar Ash still got its hooks in me. That sweet, speedy traversal is second to none; the almost-rhythmic pattern of gliding, jumping and grinding to get to those hard-to-reach areas and to take down gargantuan bosses is oh-so satisfying when you nail it. It misses a trick by not including any DualSense features, though – a bit of feedback as you move through the environment would take the game to the next level – but even without it, it’s a very nice world to get lost in indeed.

This review of Solar Ash is based on the PS5 version of the game, via a code provided by the publisher. It’s available on PC, PS4 and PS5. 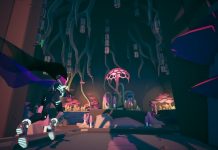 Neon-Styled Action Platformer Solar Ash Has Been Delayed Until December