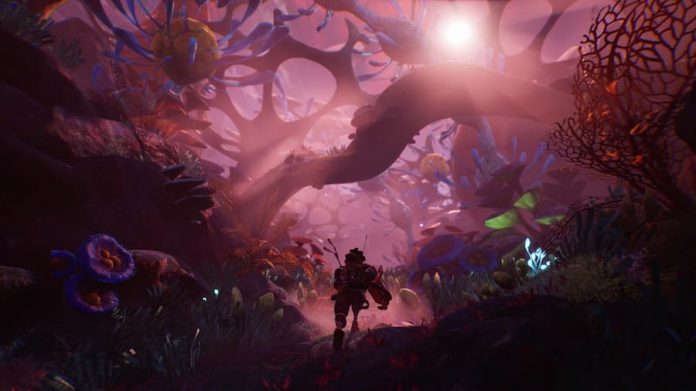 I have a slight obsession with cleaning and ‘fixing’ things in video games, and The Gunk absolutely nails it.

You’re Rani, and along with your long-time friend Becks, you’ve just landed on an alien planet. Being here is nothing unusual; this is what you do. Together in Becks’ spaceship known as the Dustbunny, you travel from planet to planet, gathering resources that you can harvest and sell. Except… the latest planet you’ve landed on isn’t quite like the others. It’s covered in some sort of gunk. And it seems you’re not the first intelligent life form to land there.

The Gunk is the latest game from Image & Form, the team behind the rather excellent Steamworld Dig games. It’s a bit of a departure, not least considering the move from 2D to 3D. But it’s a move that the studio has absolutely nailed; The Gunk is stunning, and it’s a lot of fun to boot. Not that I should be surprised, considering how much I loved Steamworld Dig 2.

Rani has a very special weapon attached to her arm. A type of power glove, she can use it to remove the gunk that’s infecting the planet. Cleanse an area and it’ll return to a state of beauty; flora will bloom, greenery will return and you’ll be struck by just how gorgeous your surroundings are. Rani’s equipment also allows her to scan the environment, so each new plant or item of interest you discover can be added to a database. After all, when you’re stuck on an unknown land, it’s helpful to know what everything around you is or does.

There are plenty of useful resources around, which Rani can collect – again with that trusty power glove of hers. You’ll want to gather up pretty much everything you come across, because resources can be used to upgrade the glove. Some upgrades are critical to the story, others are simply useful in your adventure, such as upgraded health or an extended range for the glove’s abilities. 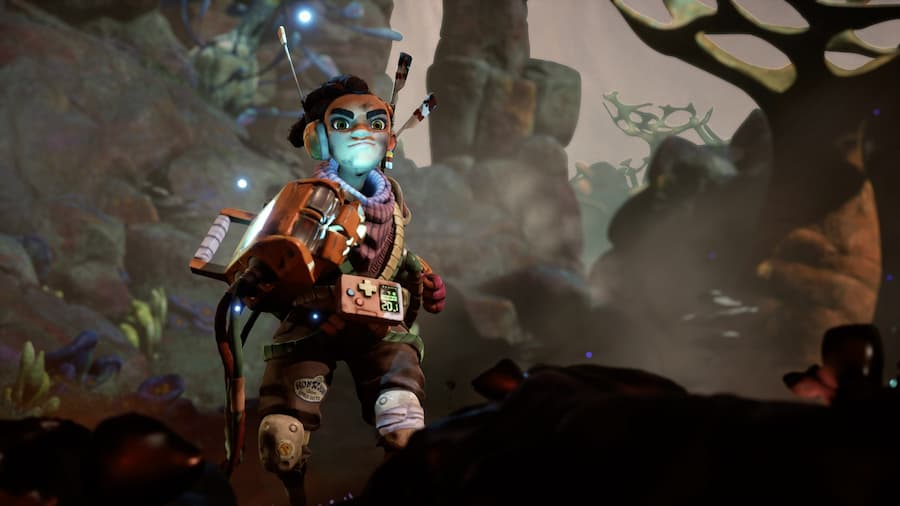 If a plant can’t be mined for its resources, perhaps it might bloom a useful seed that can help Rani as she explores. One particular seed can be planted in a pool of water, instantly blossoming into a giant leafy plant, providing platforms which can be used to access previously unreachable areas. Another doubles as a bomb which explodes after a few seconds. It’s helpful for getting past barriers and opening up new pathways, and later, a useful tool against the gunk.

Perhaps the key thing to note about The Gunk is just how satisfying its world is to explore. It’s fairly linear in that you can’t so much go wandering off the beaten path, but the world design provides an epic sense of scale while still making it so you can’t easily get lost. And so, even without any waypoints or minimaps cluttering up your screen, you’ll likely always find your way without any trouble. There are puzzles to solve in the environment; switches to activate, platforms to rotate and doors to open – the usual sort of thing. Yet traversal is so enjoyable that these sections never feel tedious or repetitive. You’ll run from area to area, cleaning gunk as you go, jumping up platforms, climbing down vines, squeezing through gaps, crawling through caves. Rani is a tough, nimble explorer, and being in control of her is a joy.

It’s possible that some players might find clearing the gunk tedious. There is a lot of it, and occasionally making sure you’ve got every last bit of it in an environment can be troublesome. But for me, the act of cleaning up the landscape is one of the most rewarding parts of the whole experience. Some instances of gunk generate monsters; pesky, gloopy enemies that must be dealt with before the area can be cleared. It adds a bit of challenge to the proceedings, but combat – if you can call it that – is rarely tricky (aside from one or two hairier moments towards the end of the game). The satisfaction doesn’t come from being victorious in battle in The Gunk, like so many games before it; rather, it comes from seeing the world blossom around you. I never got tired of watching plants and flowers leave their wilted state after cleaning the gunk.

There is a narrative to follow in The Gunk which unravels naturally as you play and explore. I shan’t spoil it, but it’s surprisingly enjoyable and is excellently delivered. With Becks back at the ship while Rani is out exploring, most of their interactions are over radio comms – there are plenty of witty lines of dialogue, along with some genuinely heartfelt moments. The voice actors of both characters do a fantastic job, too. 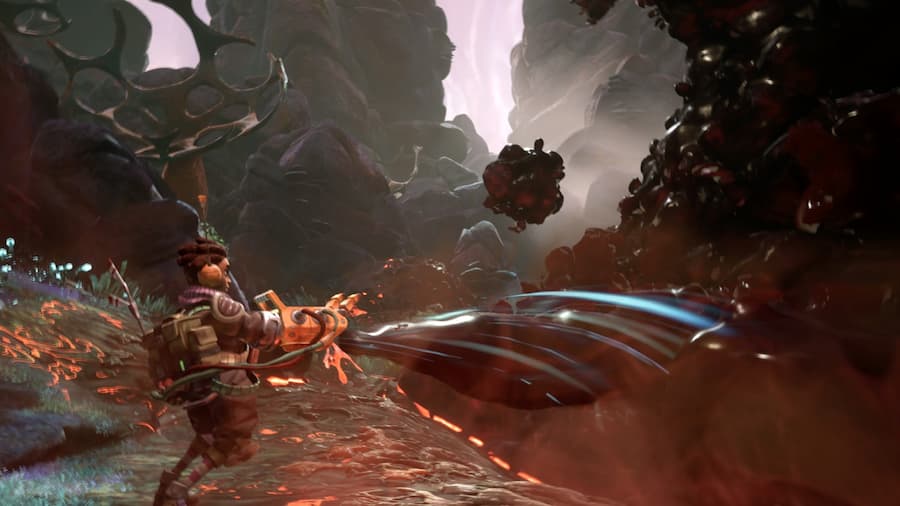 Perhaps my only complaint about The Gunk is that it’s a little too brisk, moving along faster than I’d have liked and, ultimately, being over a little too soon. It would have been nice to engage in some optional side content; additional areas to explore, maybe, with bonus upgrades for Rani’s weapon to be found. As it is, once you’re done with the story, there’s no reason to return. But, as I’ve said countless times before, if the biggest issue I can leverage at a game is that it leaves me wanting more of it, that’s surely a sign of an excellent game.

Short as it may be, my time with The Gunk has been wonderful. Image & Form’s move into the 3D realm has solidified it as a truly talented developer – and this may just be its best game yet. Beautiful, satisfying and engaging from start to finish, The Gunk is definitely worth getting stuck into.

This review of The Gunk is based on the Xbox Series X version, via a code provided by the publisher. It’s available on Xbox Series X/S, Xbox One and PC. 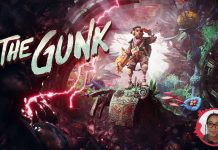