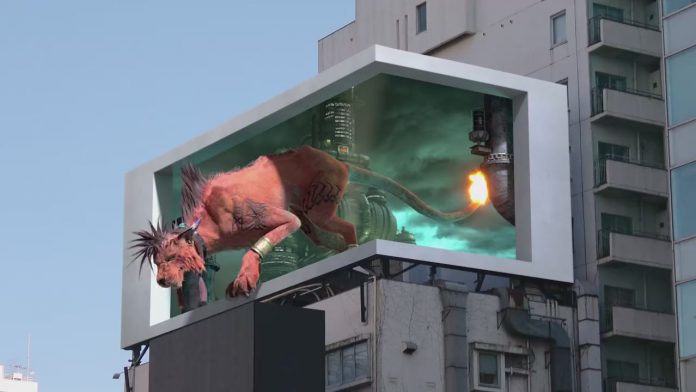 There’s no new Final Fantasy VII Remake content on the way, if Square Enix is to be believed, but this animated billboard is still very cool.

LED billboards have been getting a lot of attention of late, mainly because of the way they can be used to fool the eye into thinking you’re seeing something 3D. This Christmassy Final Fantasy billboard, featuring Red XIII from Final Fantasy VII Remake, is mind-blowing to watch, even as a Twitter video. We can only imagine how brain-breaking it must be in person.

The billboard in question is located in Omotesando, Tokyo and seems to be part of a campaign to promote Intermission, the DLC episode which, available on PlayStation 5 and PC but not PS4, adds a new story chapter, following the tale of Yuffie Kisaragi, to the main game.

So how do these billboards work? We’re not going to plumb the technical depths, though there’s a great write-up here. But one trick, in particular, is that the grey border, the one that Red XIII seems to be putting his paw over, isn’t really there.

This incredible 3D video of Red XIII is currently playing in Omotesando, Tokyo as part of a campaign running in Japan.

It’s not related to any @FinalFantasy VII Remake DLC or sequels, but we wanted to share it with all of you unable to see it in real life, we hope you like it! pic.twitter.com/CyX1prSne5

We’ve certainly got a few ideas as to how we could use these billboards. Sure, we could advertise GameSpew, but we could also (with a little assistance) create the illusion that Sadako from The Ring is crawling out of a massive TV screen – just imagine how many people you could terrify on Halloween.