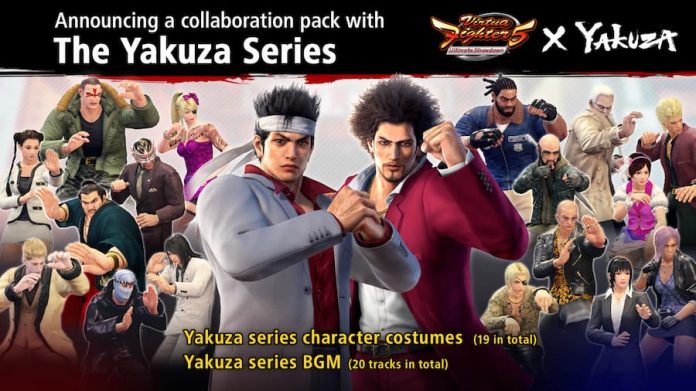 Virtua Fighter 5 Ultimate Showdown is crossing over with the Yakuza series and is getting a massive 19 new costumes.

The DLC, dubbed the the Yakuza Series Collaboration Pack doesn’t add the characters themselves to the games, just their costumes.  So instead of playing as Kazuma Kiryu, you play as Akira Yuki wearing Kazuma Kiryu’s clothes. You can call it cosplay, or you can pretend that Kiryu’s passed out half-naked in a dumpster, it’s up to you.

Virtua Fighter 5 Ultimate Showdown sports twenty characters, so either someone’s sharing a costume or one of the characters is missing out. But there are a wealth of outfits, from Goro Majima’s pink “Majima Everywhere” dress and eyepatch, through to Ichiban Kasuga’s distinctive purple suit.

Why the crossover? Aside from the fact that the Yakuza series also has you punching people in the face, albeit with a little more adventure mixed in, both franchises are owned and published by Sega. The DLC also adds music from the Yakuza games, 20 remixed Virtua Fighter tracks, 650 customisation items and more.

How do you get your hands on this Yakuza-themed wardrobe? The good news is the outfits are arriving Dec 8th so you won’t have long to wait. The bad news is you’ll have to fork out $9.99 for the pack.

We got a big kick (sorry) out of Virtua Fighter 5 Ultimate Showdown when we reviewed it, calling it “..a solid fighting game that should keep players entertained for tens of hours.” Given you don’t technically play as the actual Yakuza characters, we’re a little on the fence. but if, in the absence of a Virtua Fighter 6, you’ve been craving more Virtua Fighter content, this may fit the bill.

Virtua Fighter 5 Ultimate Showdown is available digitally for the PlayStation 4. The Yakuza Series Collaboration Pack will be released this Dec 8th.