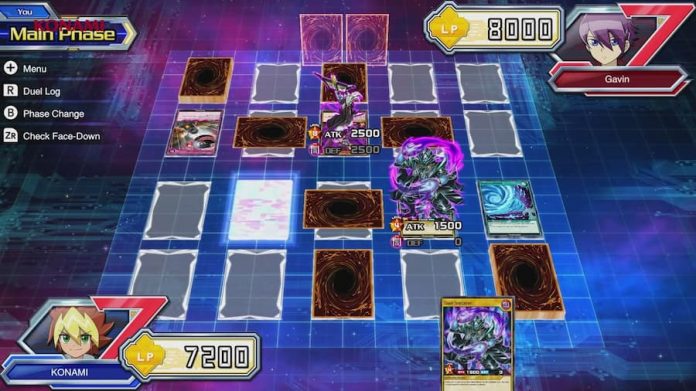 Yu-Gi-Oh! Rush Duel: Dawn of the Battle Royale!! is an absurdly long title with way too much punctuation. It’s also the name of a new Nintendo Switch game that’s out now.

It’s not new in the sense that it invents itself from the ground up; instead, it’s a hyperactive take on the original Yu-Gi-Oh! card game. A little disappointingly, there are no exploding collars, but Konami have promised there’ll be plenty of tension.

As we mentioned last month, Yu-Gi-Oh! Rush Duel: Dawn of the Battle Royale!! uses a rule set yanked straight from the from the Japanese Yu-Gi-Oh! SEVENS animation. “Not only can Duelists summon powerful Yu-Gi-Oh! monsters to their heart’s content, they can do it again the next turn,” Konami claims.

We’re on the fence a little about this development. On the one hand it should make for more dramatic matches, ensuring that you’re never absolutely assured of victory. On the other, spamming monsters seems like it will undermine the strategy elements of the game.

Fortunately, Yu-Gi-Oh! Rush Duel: Dawn of the Battle Royale!! won’t throw you in at the deep end. It sports a single-player mode, with story, which should let you get to grips with the new system. And if it doesn’t take your fancy, there are plenty of other Yu-Gi-Oh! games.

Yu-Gi-Oh! Rush Duel: Dawn of the Battle Royale!! is out now for the Nintendo Switch, available digitally through the Nintendo eShop. We still would have liked exploding collars, though.