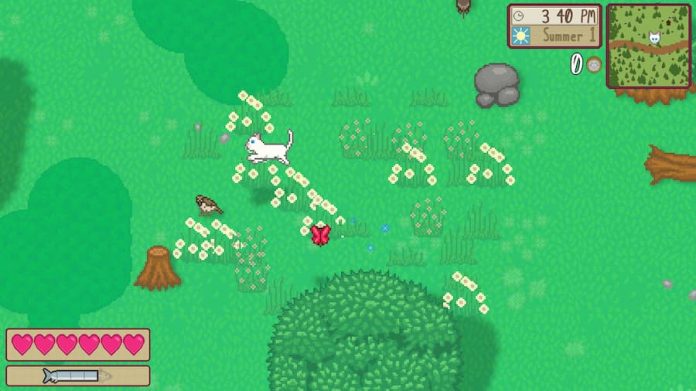 We’re not talking about the fact that the cats can talk, that the moggies are depicted as pixel-art creatures or that it’s a follow-up to 2017’s Cattails. No, it’s clear Cattails: Wildwood is fiction because when a cat jumps on a mouse it just disappears.

If the game was going for realism, it’d show the animal toying with the mouse, splitting it into several parts and then leaving the severed head  and/or other pieces on someone’s front doorstep. It’s not that we’re bitter about having had to clean mouse guts off our toes, honest.

Still, Cattails: Wildwood looks suitably appealing, given its subject matter. It’s a feline life-sim that sees you hunting food, planting and harvesting crops, investigating underground caverns, finding romance with other cats and so forth.

“We’ve started from scratch, reworking and rebuilding everything so that we can move the series forward in fun and unexpected ways,” explains lead developer Tyler Thompson. Yes, they went there, though if Falcon Development really wanted to go all out with the puns, they should have called it Starmew Valley.

Cattails: Wildwood won’t be out for a while, since it’s set for a Q4 2023 release. Still, you can wishlist it on Steam and pick up the original Cattails on PC or Nintendo Switch. You can also find out more at the official Cattails website, and back the Kickstarter when it launches this May 10th.