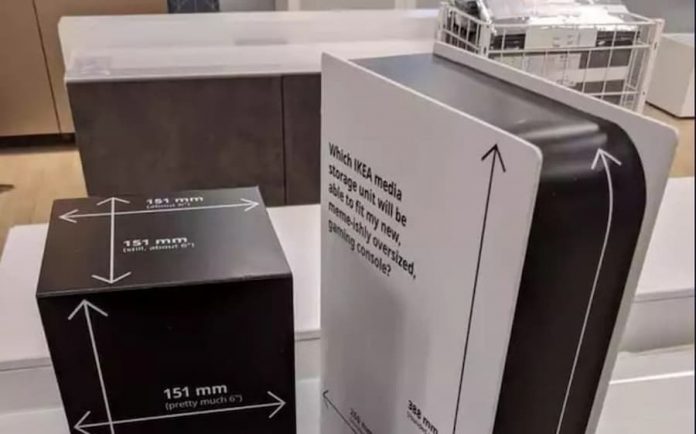 Is creating fake Xbox Series X and PlayStation 5’s a smart move on Ikea’s part? Yes. Are these going to end up on eBay? Also yes.

We already knew about Ikea’s fake game covers, thanks to a picture doing the rounds on Reddit. But those covers appeared to have been whipped up in-store by some enterprising Ikea employee. But these dummy consoles, created so you can figure out if furniture you’re looking at purchasing will fit your new next-gen device, look much more professional.

As reported by GamesRadar, an eagle-eyed Reddit user spotted these in their local Ikea store but you can guarantee that other stores will sport these. The mock-ups, er, mock, the size of the PlayStation 5 in particularly, referring to it as “meme-ishly oversized”. They also use the Cards Against Humanity font which is faintly off-putting.

Given the scarcity of both consoles, though the situation is slowly improving, this could be your best chance of being in the same room as a PlayStation 5. Think of it as getting your picture taken with a halfway-convincing celebrity lookalike. And yes, there’s every chance someone will pinch one of these and list it on eBay.

"Which IKEA media storage unit will be able to fit my new, meme-ishly oversized, game console?" from gaming

However, there is one thing these dummy consoles don’t take into account and that’s the fact that both need some serious ventilation. If you’re using a media unit, you should ideally have one that’s open at the back. Gamers Nexus has a great video showing how both consoles handle ventilation which is well worth watching if you’ve managed to net one of these hard-to-come-by machines.