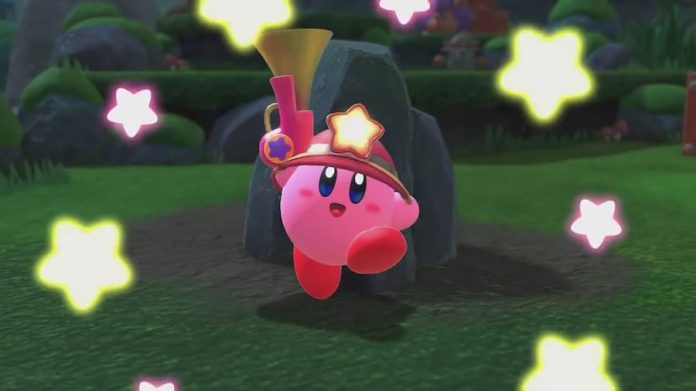 Kirby and the Forgotten Land is a new adventure for the long-standing, enemy-guzzling Nintendo character and it’s landing on Nintendo Switch.

And you know what? There are all sorts of things we’d love to tell you about this cutesy 3D platformer. We could start with the news that it’s just over two months away from release, so you’ll barely have to wait to dive into this adorable pink vacuum guy’s new adventure.

We could also talk about how cool it is that another play can join you in rescuing the Waddle Dees who, despite having come to blows with Kirby in the past, are very much the victims this time. Or maybe we could explore Kirby’s new abilities, which include the Drill and Ranger abilities. Suck in an enemy with the Drill ability and you can attack foes from below.

Maybe we’d explain how excited we are to mess around with the mini-games features in the trailer, which look as if they could be almost as much fun as the main game itself. Then we’d discuss how the Waddle Dees seem to be Kirby and the Forgotten Land’s moons, in so much as you can complete a level without rescuing them all but finding them all gives you a reason to replay the game.

We’d probably conclude by telling you that Kirby and the Forgotten Land is arriving on Nintendo Switch this March 25th, and urge you check out the short but colourful trailer above.

However, we’re much too distracted by the fact that Kirby has a gun. Yes, Kirby and the Forgotten Land will, at some point, let your adorable, bouncy protagonist acquire a proper bullet-firing gun. We know that Kirby has been devouring the souls of his enemies and stealing their powers, but giving him such a grounded weapon feels so, so wrong.

It’s only been a couple of months since we learnt that The Wizard of Oz’s Scarecrow was toting a six-shooter, and now this. What are you trying to do to us, Nintendo? If you’ll excuse us, we need to lie down and think about kittens.