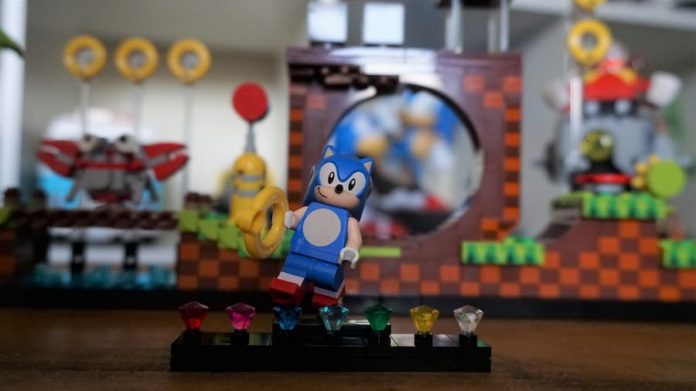 It only seems fair that video games enter the world of LEGO after LEGO has been in the video game world for years.

Perhaps what’s not fair, however, is that while Overwatch has had its own theme, and Nintendo currently has a Super Mario theme and two adult-focused sets, it’s been down to LEGO Ideas for the legendary Sonic The Hedgehog to get a set (not counting the LEGO Dimensions pack).

Based on an idea submitted by toastergrl, LEGO Ideas 21331 Sonic The Hedgehog – Green Hill Zone is a fantastic recreation of the stage that made many gamers a fan of the hedgehog with attitude in the early 90s. As such, there has been some major deviations from the set toastergrl put forward (which was based on Sonic Mania). But nevertheless, it’s safe to say that Sonic fans are definitely going to want to get their hands on it, even though there are some issues to bear in mind. 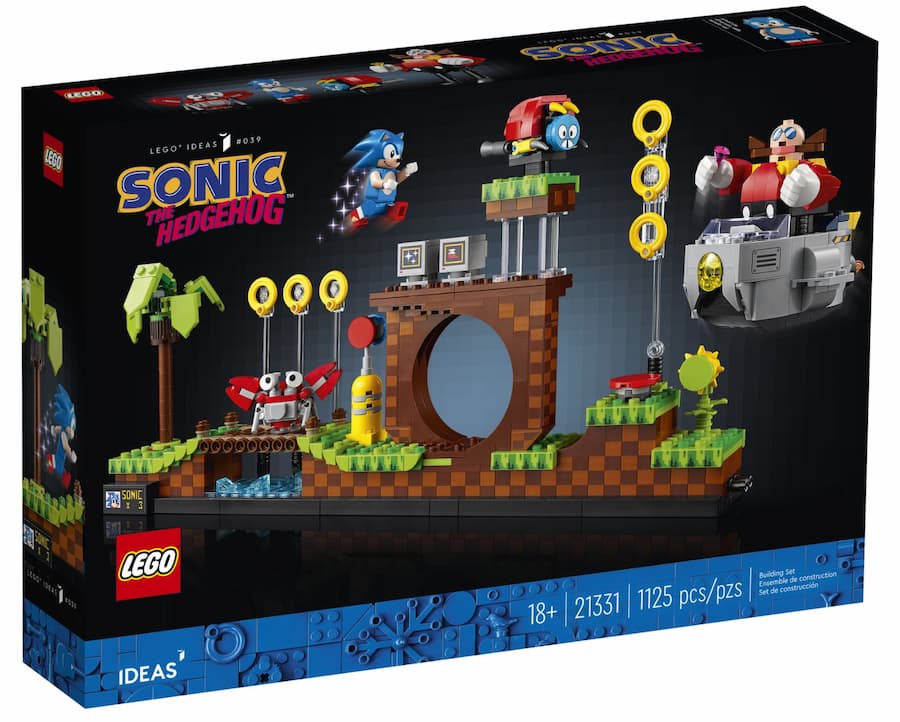 What’s in the box?

In the pizza-style box are six large bags, numbered 1-6. There’s also one small bag, accompanying large bag number 6. The instruction manual is adorned with a wonderfully nostalgic image of the Sonic The Hedgehog title screen – instantly recognisable to anyone who had a SEGA Mega Drive/Genesis or has played the game on any format since.

Across its 188 pages, you’ll find instructions on how to build the set, and also possibly learn some information about Sonic and his 30-year history. And finally, there are stickers. Two sticker sheets come with the set, with a total of over 20 stickers. 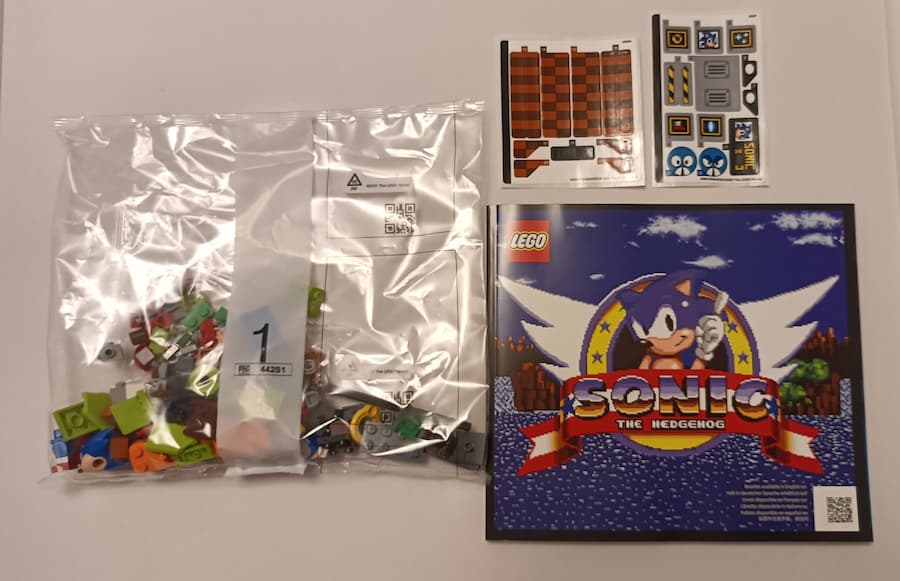 LEGO 21331 Sonic The Hedgehog – Green Hill Zone is largely built in a modular fashion, with the first four bags each focusing on a specific part of the stage. After building Sonic, you proceed to build the first small piece of land, decorated with a palm tree. You then move onto building a bridge, connected to two more small pieces of land. After that comes a loop-de-loop. And the final part is a multi-tiered piece of land with a bouncy spring. The contents of bag 5 are then used to add further detail to the set as a whole, such as adding rings suspended on clear poles, a checkpoint, and even a couple of TV screens. The duo of bags numbered 6 are all about building the big bad – Dr. Robotnik and his iconic floating vessel. 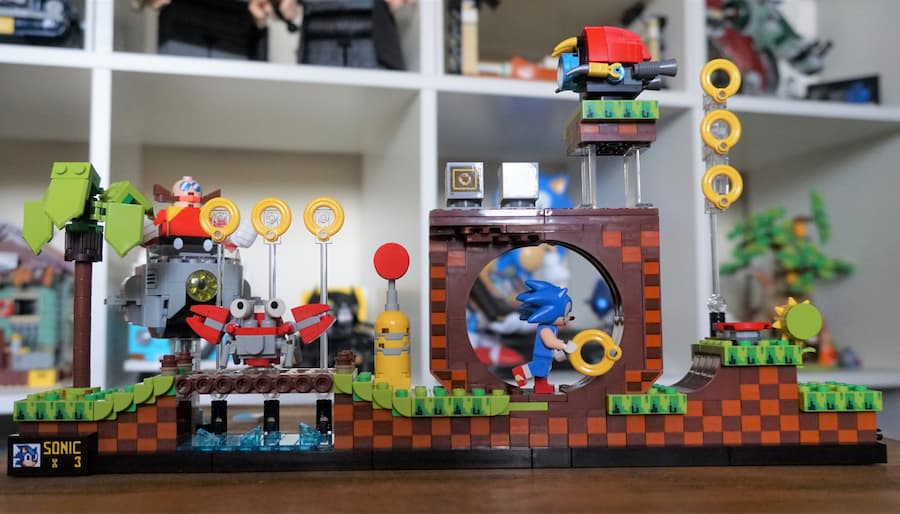 Building the four parts of the stage would be more enjoyable overall if it didn’t so much revolve around stacking 1×1 plates of various shades of brown on top of each other. The end result is great, but it can get a bit tiresome. Other than that though, the build is rather enjoyable on the whole, with some nice parts usage. The loop-de-loop is particularly impressive, though it’s a shame that large brown columns are used for its exterior walls, adorned with three large stickers each.

Surprisingly, Dr. Robotnik is undoubtedly the star of the show. His craft is simply wonderful, and building the man himself is very enjoyable. He even has special chunky hands. 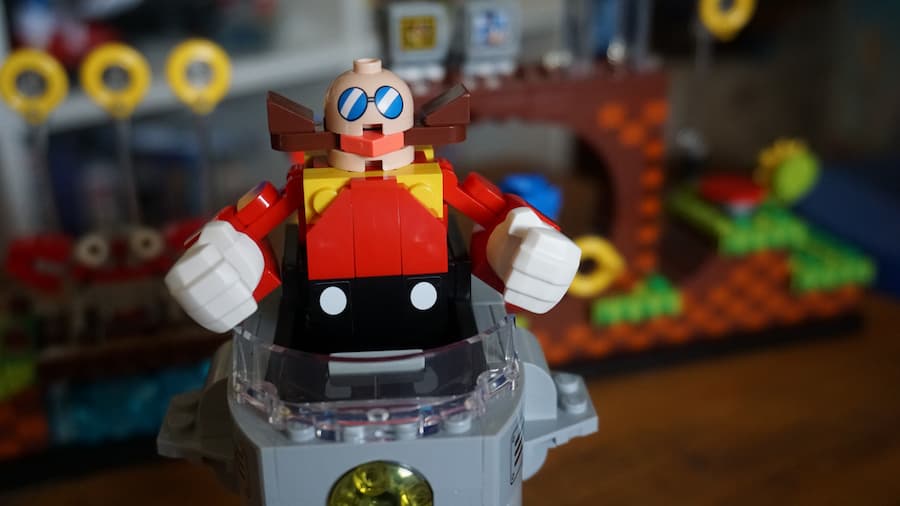 It’s just a shame that more consideration hasn’t been given to the flexibility of the set. The two central pieces – the bridge and the loop-de-loop – can be switched around if you wish. The pieces on either end, however, are built using different connectors – lugs rather than axles. The idea is that you can connect multiple sets together, but it would have made more sense to be able to completely change the order of its elements. It can be done, but a knowledge of LEGO will be required. And spare pieces.

The number of stickers in this set is also a bit of a downer. Some things you would expect to be printed, like the face of the Motobug and the TV screens, are actually stickers. Even worse, if you’re not careful, or new to LEGO, you could attach the sticker (or stickers – you get two different expressions) for the Motobug with the wrong orientation. Be careful when you come to that stage. 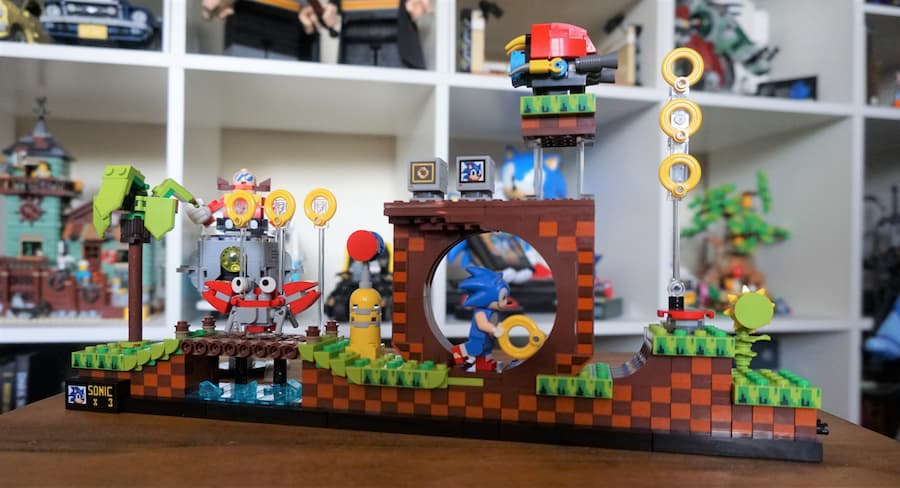 While LEGO 21331 Sonic The Hedgehog – Green Hill Zone is undoubtedly intended as a display piece, there’s no reason why it can’t be used for play. The inclusion of both Motobug and Crab enemies provide fun for those with wild imaginations. And then there’s Dr. Robotnik to consider, who can be removed from his craft. The springboard is also functional, allowing you to shoot Sonic up into the air. It’s just a shame that the technology found in recent LEGO themes such as VIDYO and LEGO Super Mario hasn’t been implemented to allow for soundbites – though that would require a different type of Sonic figure, after all. In any case, at its price point, this make an attractive playset or a brilliant display piece for those into Sonic The Hedgehog. 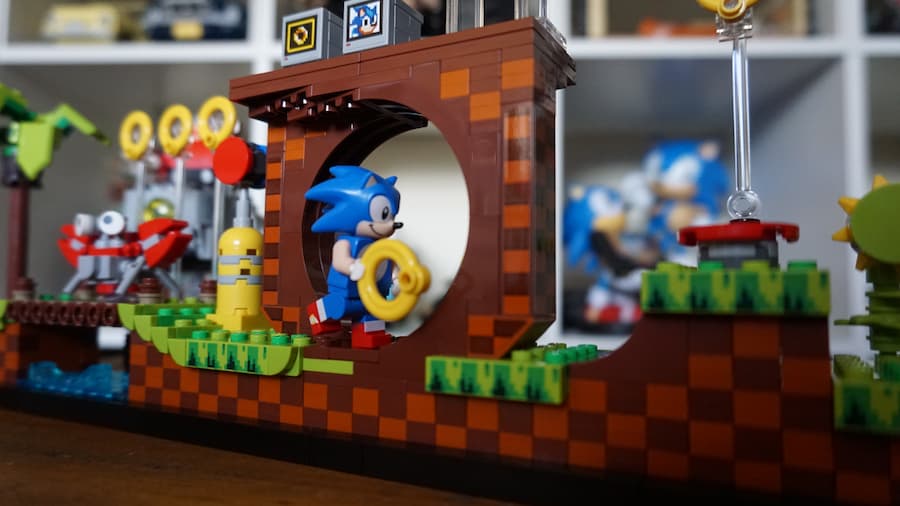 With 1,125 pieces, LEGO 21331 Sonic The Hedgehog – Green Hill Zone is great value for money at just £59.99, even if a lot of those pieces are just 1×1 plates. You get the idea that toastergrl’s initial submission has been used as a springboard rather than the basis of this set, and while that raises some questions about the LEGO Ideas platform, there’s no denying that what’s been delivered is much more substantial and eye-catching.

This is a must-have display piece for any ardent Sonic fan, and even those with just a simple interest in video games might find it appealing. We just can’t help but feel that Sonic deserves his own theme. With so many stages, characters and enemies for LEGO to plunder across countless games, the possibilities are endless.

This article was originally published on That Brick Site.