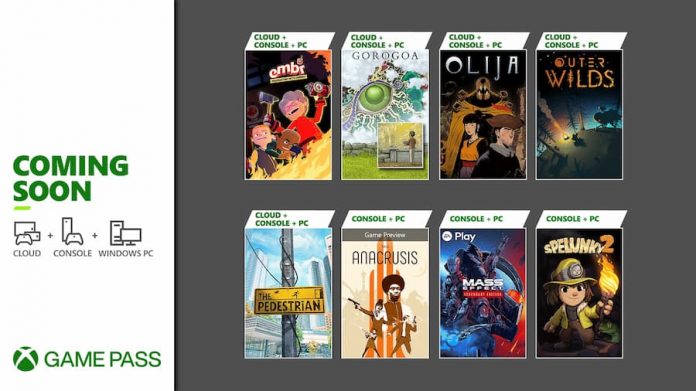 Microsoft has revealed the first batch of titles that are joining Xbox Game Pass this January.

The announcement came a little later than usual, likely due to the Christmas holidays, so three of those titles, The Pedestrian, Olija and Gorogoa, are already out. However, there are several other games that’ll be joining Microsoft’s gaming subscription service. Here’s what’s arriving in the first half of this month.

We’ve already shared our thoughts on those first three titles, so what else is worth having? Outer Wilds is an absolute gem, casting you as a lone astronaut exploring a very strange solar system. We called it “..such an enthralling excursion that you’d be mad to miss out.”

UPDATE: We thought we had a bit of deja vu there – Outer Wilds has previously been on Xbox Game Pass but was removed. It’s back as of January 13th.

The Anacrusis is also worth your time – it’s a sci-fi take on Left 4 Dead which, more so than Back 4 Blood, recognises the importance of generating tension. And then there’s Mass Effect Legendary Edition, which we’ve left until last for a very good reason. Is this massive sci-fi action RPG worth your time? Absolutely, even if we’re not entirely on board with the ending.

So what’s the catch? Mass Effect Legendary Edition is available on PC Game Pass, but on console it’s only available through EA Play so you can’t play it on Xbox with a regular Xbox Game Pass subscription. If you want the console version you’ll need to subscribe to Xbox Game Pass Ultimate which also includes Xbox Live Gold. It’s mildly confusing, yes, but thankfully it doesn’t happen too often.

You can expect a second wave of Xbox Game Pass titles to be revealed later this month, round about January 14th. In the meantime, there’s plenty here to ignore your already massive gaming backlog for.