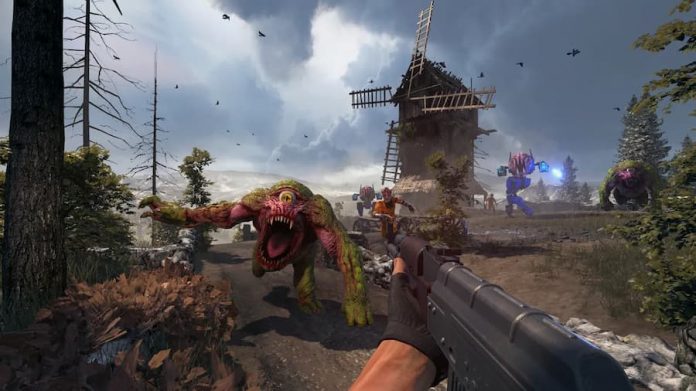 Serious Sam is back and, thanks to Serious Sam: Siberian Mayhem, you could cut glass with his nipples.

Okay, that’s not been 100% confirmed, but going by the promo art he’s still wearing a T-Shirt which seems like a huge mis-step when you’re heading to colder climes. Maybe it’s part of his cunning plan to distract his enemies before shooting them repeatedly in the face.

Whatever his attire, Serious Sam: Siberian Mayhem will offer the same kind of monster-murdering mayhem that Serious Sam 4 and its prequels delivered. The project did, in fact, begin life as a fan-created mission pack for Serious Sam 4 but, supported by Croteam, developers Timelock Studio turned it into a standalone expansion.

So you don’t need Serious Sam 4 to play it, even though it uses that title’s engine. That said, if you already own Serious Sam 4 on Steam you can get Serious Sam: Siberian Mayhem at a discount. But, being officially supported by Croteam, it sports all new dialogue, something that’s usually missing from map-packs.

The series’ trademark is that it hurls an absurdly large amount of foes at you, more so even than the original Doom, to the point where standing still means a quick demise. Serious Sam: Siberian Mayhem looks set to be just as manic, introducing new monsters, a new weapon – the crossbow – and vehicles such as the snowmobile and mech.

There is one catch, however – as of right now, Serious Sam: Siberian Mayhem is a PC-only release. So, while Serious Sam 4 is available on consoles, and is free on Xbox Game Pass, it may or may not see the light of day on those platforms.

You can get your hands on Serious Sam: Siberian Mayhem when it hits the PC, via Steam, this January 25th. Sure, it’s a little too late for Christmas, but given how much we enjoyed Serious Sam 4, we’re looking forward to joining Sam on his latest outing. We’re definitely going to bring a fleece, though.