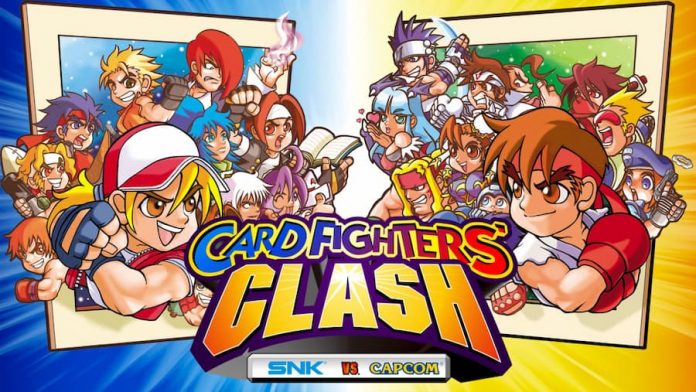 SNK vs Capcom: Card Fighters’ Clash, which first saw the light of day on the Neo Geo Pocket, way back in 1999, is out on the Nintendo Switch eShop.

Remember the Neo Geo Pocket? No? We can’t say we surprised – the black and white console didn’t fare well against the colour Game Boy, er, Color. But the colour follow-up, the Neo Geo Pocket Colour did a little better and it’s that platform that spawned SNK vs Capcom: Card Fighters’ Clash.

Now, this cross-company card battler is coming to the Nintendo Switch, letting you pitch characters from multiple franchise against each other. Sadly, there’s no Phoenix Wright, but you can enlist the aid of characters from Strider, King of Fighters, Resident Evil and more.

Enlist their aid? Yes, because unlike Capcom VS SNK, or Marvel VS Capcom, both traditional brawlers, you’re not playing as the characters. Instead, you’re cast as a new characters, with pictures of the established SNK and Capcom characters appearing on your cards. We hope they’re just pictures, because the alternative is that their souls have been somehow imprisoned inside your deck.

A welcome bonus is that this version contains both the SNK and Capcom versions of the game. Because, not unlike Nintendo’s dual-release Pokemon titles, there were two versions of the game, one for each company. They do sport separate saves so you’re essentially getting two games for one.

There were several sequels but the version of SNK vs Capcom: Card Fighters’ Clash that’s landed on the Nintendo Switch is the original release, complete with pixel-art graphics and a chiptune style soundtrack. It is, admittedly, a niche title but at £7.99 it could be worth investigating.

SNK vs Capcom: Card Fighters’ Clash is out now on the Nintendo eShop.