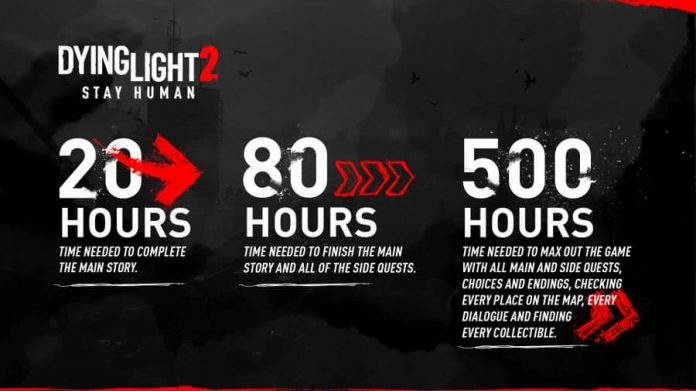 Wouldn’t it be great to have a game that takes 500 hours to complete? Not really, no, which is why Dying Light 2 developers Techland have clarified their earlier claim.

The developer and publisher’s original tweet stated, “To fully complete Dying Light 2 Stay Human, you’ll need at least 500 hours..”. We shared our opinion yesterday and while Techland did, later, explain they meant it’d take 500 hours to finish every aspect of the game, the Twitter fart showed little sign of dissipating.

So, today, Techland have attempted to waft it away by tweeting out a fresher, more fragrant explanation. According to this new tweet, it’ll take just 20 hours to complete the main story, confirming the information writer Alanah Pearce was given some months earlier.

If, on the other hand, you want to finish the story and all of the side quests, it’ll take you 80 hours. And if you want to 100% the game, exploring every nook and cranny, getting every collectable, ending and so on, it’ll take 500 hours.

We wanted to clarify our recent communication about the amount of hours required to complete the game. Dying Light 2: Stay Human is designed for players with different gameplay styles and preferences to explore the world how they see fit.#DyingLight2 pic.twitter.com/tcaDKULMo8

So why the confusion? It is, in part, due to poor communication and the ambiguity of language. If you compare the above tweet with the original, you’ll notice that the word “complete” has jumped from “500 hours” to “20 hours”. And yes, it’s true that complete could mean how long it would take to collect every item and so on.

But, if someone was to ask us “Have you completed Grand Theft Auto V?” we’d say yes, because we’ve played it till the credits rolled. We haven’t picked up every single collectible, but in our minds, we’ve completed it.

However, someone at Techland also thought that 500 hours of playtime, in the context of a single player game, was something to boast about. Presumably, they thought the internet would erupt in applause, with the news that you’d have to spend five hours a day, for 100 days, to complete a single game. We suspect harsh words have been exchanged.

We’re still looking forward to getting our hands on Dying Light 2 Stay Human, however, and we’re hoping those 20 hours don’t feel like a chore. The game is set to arrive this February 4th. It’ll land on the Xbox Series X and Series S, PlayStation 4, PlayStation 5, Xbox One, PC and, via cloud gaming, the Nintendo Switch. 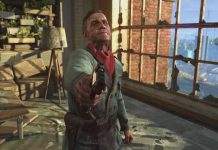 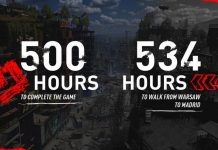