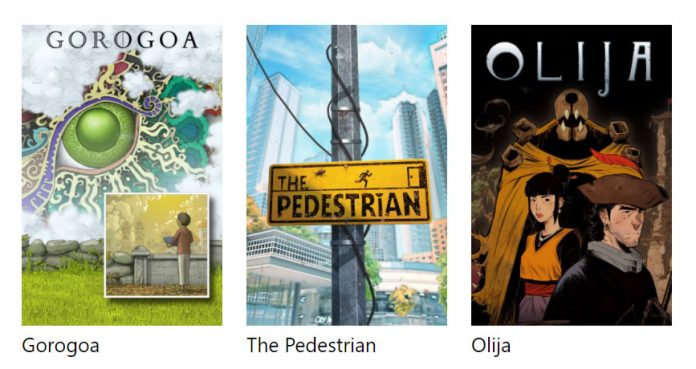 While Microsoft have yet to officially announce January’s Xbox Game Pass titles, three new titles have been added to the service.

The three titles, all of which are available on Xbox and PC, are The Pedestrian, Olija and Gorogoa. They’ve arrived on Xbox Game Pass with no fanfare, which raises the question.. could this be a belated Christmas present from Microsoft?

The answer is, almost certainly, no. Microsoft puts out two Game Pass announcements a month, one at the start of the month, the other in the middle. December’s first lot of Xbox Game Pass games were announced on December 1st, so it looks as if, due to the holidays, these announcements are running a little late.

In other words, these three titles will be part of January’s initial wave of titles, but since all three are worth experiencing, that’s no bad thing. Here’s what’s on offer:

The Pedestrian is an odd but compelling puzzler that sees you stepping between road signs. We gave it an 8 out 10 remarking that, “Its fantastic concept shines through, but beautiful graphics and excellent, inclusive game design make it something quite special.”

Olija is short but sweet action adventure that casts you as a harpoon-wielding, shipwrecked sailor. “Aside from occasionally getting lost, every moment spent with this short adventure game is a joy”, we said in our review, also awarding it an 8 out of 10.

The third title, Gorogoa, is more of a puzzle-based art piece than a conventional game. ” I’m glad I’ve been privy to it. It’ll stick with me as a piece of art to admire, but not as a video game to enjoy”, we concluded.