The world feels like a scary and heartbreaking place to be right now.

With the news that Russia has invaded Ukraine dominating headlines for the past few days, it’s been hard to focus on anything else. To have to continue playing and writing about games feels pointless in such a time of turmoil, but life must go on. Thankfully, there are ways we can help, and many game developers have already stepped up to show their support for Ukraine and its people.

Last week, 11 bit studios kicked off a cavalcade of support by announcing that for one week, all profits from This War of Mine would go straight to the Ukrainian Red Cross. That money would then directly support the victims of war in Ukraine. Within 24 hours, 11 bit studios tweeted it had already raised $160,000, which is a phenomenal amount of money.

Since then, many other games studios have joined 11 bit studios by offering their profits to aid victims of war in Ukraine. We’ve rounded them up below. By supporting the studios and buying their games, you’ll also be helping Ukraine’s people in need.

How can you help Ukraine war victims?

By purchasing the games from the companies listed above, you’ll be directly supporting the people of Ukraine in this time of need.

If you’d like to make your own donation, here are some links where you’ll find more information about relevant charities: 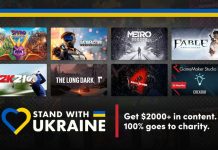