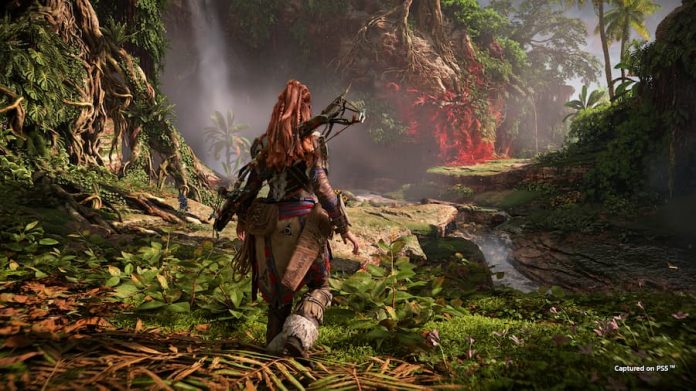 A hero’s work is never done.

Picking up months after Aloy successfully fought to save Meridian, you might be surprised to still find her with the weight of the world around her neck at the beginning of Horizon Forbidden West. The imminent threat to her people may be over, but another is now forcing her to take action: a plague spreading across the land, killing any life that it touches. After seemingly running out of options, a glimmer of hope presents itself. But to capitalise upon it, Aloy is going to have to journey to the Forbidden West, where new adversaries and challenges await.

Like most video game sequels, Horizon Forbidden West doesn’t stray far from the formula put together for its predecessor. Instead, it simply aims to be bigger and better. And boy, does it achieve it. The Forbidden West itself is vast and varied, providing multiple rewarding biomes to explore. And with them come new mechanical creatures to sneak past or engage in combat. Throw in an expanded arsenal, better quest design, and a whole host of other improvements, and you have what is no doubt one of the best open world games ever made.

But first, the visuals. You only have to lay eyes on Horizon Forbidden West for seconds to see that it is absolutely drop-dead gorgeous on PS5. Character models have been meticulously created, with ultra-sharp textures and fluid animations bringing them to life. Opening up photo mode and zooming in close to faces of main characters and NPCs alike has never failed to impress us; they’re so lifelike that it’s hard to distinguish them from photos. And just as much care has been put into the environments, too. Whether you’re on a coastal shore or in a dense forest, you feel like you’re actually there thanks to the detail lavished on them. A day and night cycle and dynamic weather just further enhances the immersion.

A game isn’t just defined by its visuals though. Thankfully Horizon Forbidden West is just as much fun to play as it is a pleasure to look at. The nature of this adventure means that you hit the ground running; Aloy is already a capable warrior, so you’re thrown pretty much straight into the action. There’s good news for those wishing to jump into this sequel who haven’t played the original as well – a story recap is included to get newcomers up to speed. And thanks to a range of difficulty and accessibility options, pretty much anyone is able to jump in and have a good time. 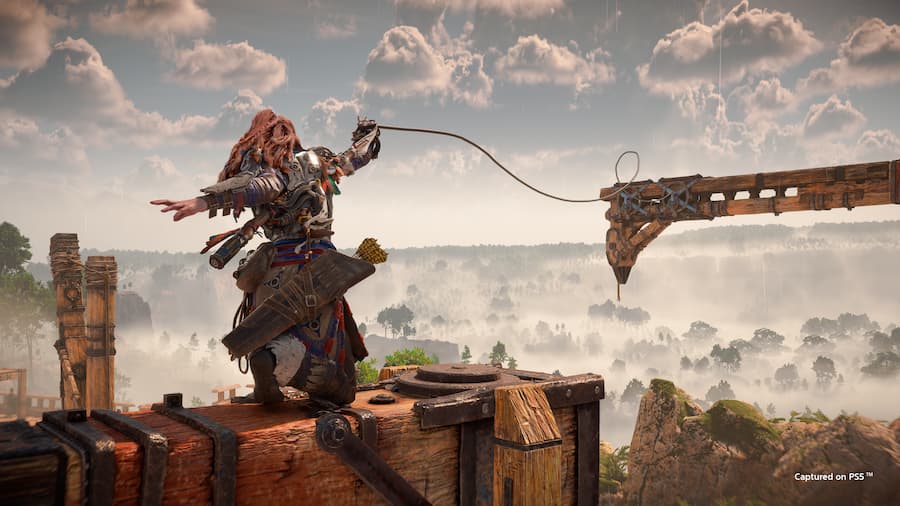 Those wanting a more immersive experience can crank the difficulty up, requiring them to employ more strategy when it comes to taking on enemies. On anything higher than Normal, making use of weaknesses and targeting specific body parts to gain the advantage is an absolute must. With Explorer mode enabled, they’ll also have to seek out places of interest and pay close attention to the world around them. Many though, will want to opt for Guided mode, which makes Horizon Forbidden West much more gamey. Guerrilla has even improved Aloy’s scan mode, allowing her to easily identify cliffs and other structures that can be climbed.

Traversal is enhanced in numerous other ways, too. A grappling hook obtained early in the game can not only be used to pull on certain objects in the environment, but also quickly pull Aloy up to ledges. To quickly descend from great heights, a broken energy shield can be employed as a makeshift glider. And thanks to another special piece of gear, Aloy can breathe when in water, allowing for some underwater exploration. This in all in addition to the numerous mounts you can acquire, allowing Aloy to cover ground at greater speed while making use of machine attacks. Just before the end of the main story, players are presented with a new and exciting way to get around the world, too. 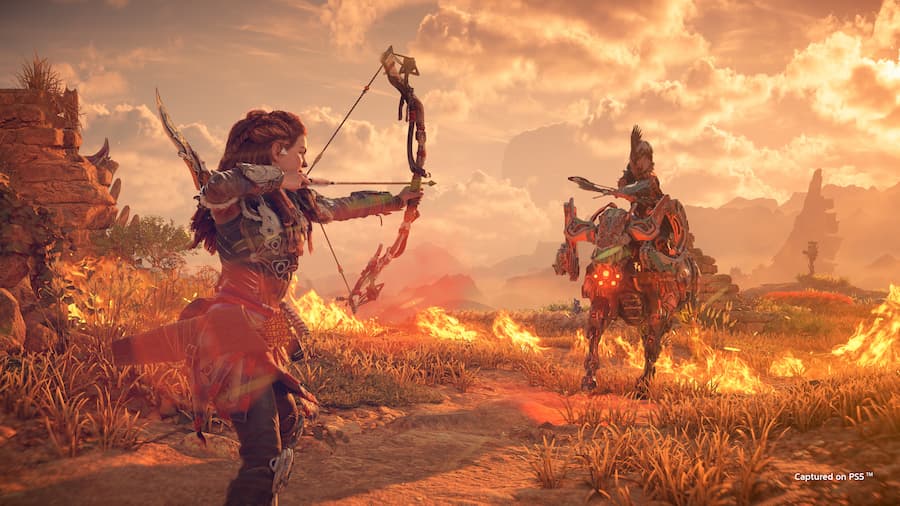 It’s the combat of Horizon Forbidden West that really makes it the riveting adventure that it is, though. A great number of the mechanical creatures from Horizon Zero Dawn make a return, and plenty of new ones are introduced. How you deal with them is up to you. Some will choose to sneak past most encounters if they can, while others will openly engage in combat at any opportunity. But there’s one thing for certain: it always pays to know your enemy. Scan an enemy and you’ll find out what elements it’s weak to, as well as information regarding specific parts such as canisters. Some even have heavy weapons mounted on them; should you be able to break them off, you can make use of them yourself. In some battles it can be a game-changer.

Heavy weapons are something of a treat, offering extra help when the odds are stacked against you. For the most part, though, Aloy needs to make use of her personal arsenal to combat her foes. It’s had a bit of a revamp for this outing, with weapons such as bows now having a wider range of elemental and special arrows available for them. Other weapons return with some tweaks, too, such as the Tripcaster and Blast Sling. Adding to the repertoire are new weapons such as the Spike Thrower and the Boltcaster, the former useful thanks to its high crit rate, and the latter for its ability to bombard enemies with a flurry of bolts.

It’s actually bewildering just how many options you have when it comes to dealing with your enemies. Stealth can be used to take down most smaller mechanical creatures and humans with a single attack. And when it comes to taking down enemies in open combat, each long-range weapon available has its particular strengths and weaknesses. Traps are once again available, useful in both stealth and open combat situations. It’s up to you what you use and don’t use, but you’ll likely want to match your choices with the appropriate skill trees.

You could compose a weapon wheel wholly of bows, for instance, each offering a variety of special arrows. Max out the Hunter skill tree, and you’ll really be able to make the most of your loadout. You’ll be able to stay in concentration mode for longer, and make use of numerous bow skills. Alternatively, if you like to get up-close-and-personal to your enemies with Aloy’s spear, you might want to invest points in the Warrior skill tree. As well as offering up new combos, it also boasts a new spear ability where a powerful energy charge can be developed and then attached to enemies. Shooting it with a bow then releases a devastating blast. Throw in some nifty new Valor skills that boost Aloy’s abilities for a period of time, and you have many choices to make. 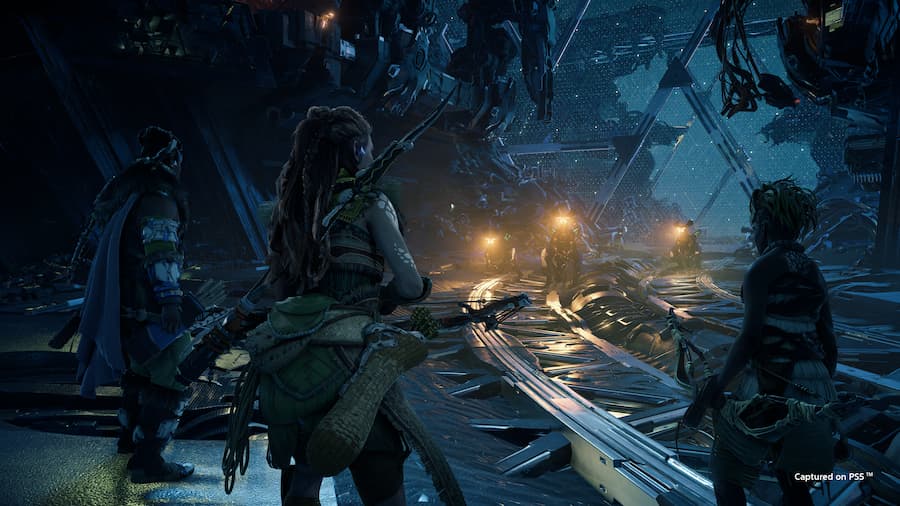 It’s quite amazing that even after completing the main questline of Horizon Forbidden West – an endeavour that took us just over thirty hours – we still felt like we’d only just scratched the surface of it in so many regards. There were still weapons that were pretty alien to us, and a whole host of side content that we hadn’t touched. Much still remains to be done now. One thing is clear though, Horizon Forbidden West‘s side content in general is much more enjoyable to undertake than in the first game. Side quests are more rewarding and engaging, and other tasks are less generic. You’ll not find yourself repeatedly climbing Tallnecks, for example; instead you’ll be finding other methods of getting on their flat heads.

Bigger and better than its predecessor in every single way, Horizon Forbidden West is a game that’s ever so easy to get lost in. It’s got a surprisingly heart-warming story in which Aloy finally realises the value of friendship, thrilling combat that never loses its edge, and a dense world that’s not only cram-packed with things to do, but is also utterly gorgeous. It’s yet another must-have first-party title for PlayStation gamers. And on PS5 with its lightning-fast loading times, stunning visuals and brilliant DualSense implementation, it’s a real showcase of what the hardware can do.

This review of Horizon Forbidden West is based on the PS5 version, with a code provided by the game’s publisher. It’s available on PS4 and PS5. 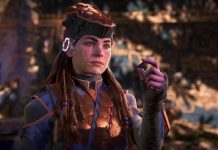