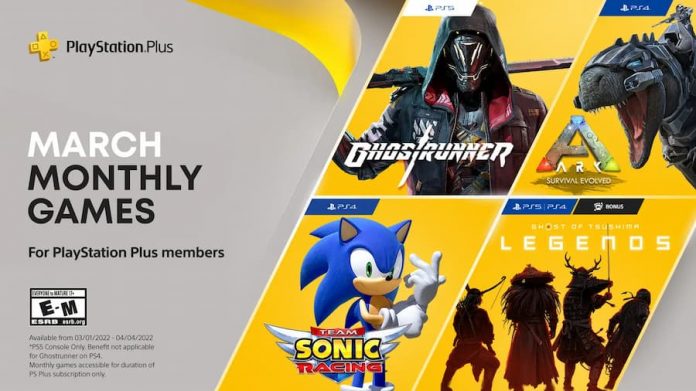 PlayStation Plus’s March 2022 titles have been unveiled and they’re a notch above last month’s offerings.

That’s not to say PlayStation Plus’s February titles were absolutely abysmal but, as a lot of people point out, one of the three titles was a standalone version of a piece of Borderlands 2 DLC (albeit one we very much enjoyed playing). There’s none of that this month, though Sony has done its usual thing of including only the PlayStation 5 version of a title that’s also available on PlayStation 4.

Aside from the usual three titles, PlayStation Plus subscribers will also get Ghost of Tsushima Legends, the co-op element of the superb samurai-em-up Ghost of Tsushima. It’s a “bonus” title so, unlike February’s Tiny Tina’s Assault on Dragon Keep it’s not taking the place of a regular title.

We got a kick out of Team Sonic Racing when we reviewed it back in 2019, saying that it’s “flawed, but there’s still plenty of fun to be had with it”. But we can confirm that futuristic ninja game Ghostrunner is an absolute must-play, particularly if you love games that keep you on the move. In our review, we remarked that, “… when you finally clear a room of enemies in one continuous motion… you can’t help but feel a great sense of accomplishment and awe.”

Ark: Survival Evolved, meanwhile, is an online only dinosaur-themed survival game and if you’ve ever wanted to roam around on a T-Rex, it’s well worth a look. And Ghost of Tsushima Legends, as we’ve said, is the multiplayer co-op element of the superb Ghost of Tsushima. So if you’ve not purchased the main game (which comes with this mode) it’s a good way of dipping your toes in the bloodstained water.

All these games will be available from March 1st until March 31st, meaning you’ve got a matter of days to pick up last month’s titles.